What is behind the coronavirus trading boom? 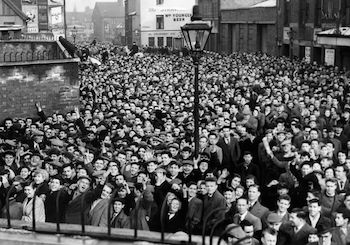 You might think the quickest stock market crash since the Great Depression, a global pandemic, the daily death count on the news, and millions of people losing their jobs would turn people off investing.

The past few months have seen an army of new customers open accounts with online brokers.

Still crazy after all these fears

At first the influx of avid traders was chalked up to the lure of commission-free trading in the US.

But the spike in interest came well after the advent of free dealing, and mostly coincided with quarantine: 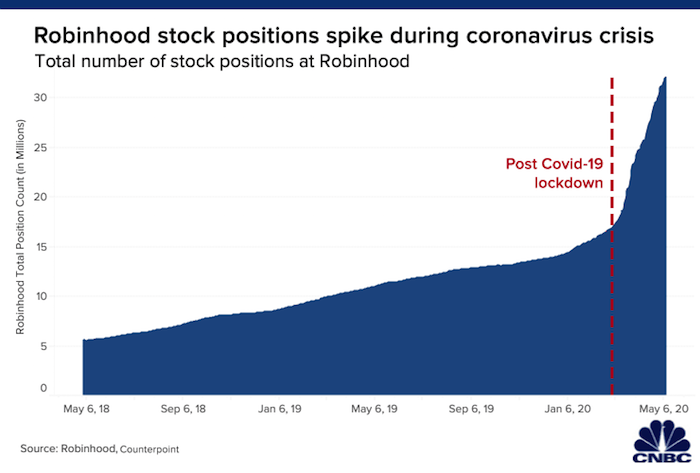 Besides, UK platforms like Interactive Investor and Hargreaves Lansdown that charge dealing fees have also been as busy as a doctor with a Covid-19 test kit during lockdown.

According to the Financial Times:

The Share Centre reported a 269% increase in brokerage account openings from March 9 to 30, compared with the same period in 2019.

The month of March is typically busy for investment and savings accounts as the Isa season reaches its height, but the numbers have exceeded the expected annual uplift. Half of all accounts opened on the platform since February 17 were opened in the final two weeks of March.

Interactive Investor, the UK broker, reported a 119% increase in the number of Isa accounts opened on its platform between February 18 and the end of March compared with the previous year. The number of self-invested personal pension (SIPP) accounts opened was also up almost 50% over the same period. Interactive Investor has reported record trading volumes since mid-February.

Vanguard UK reported a three-fold increase in the number of new accounts opened in the first quarter of 2020, compared with the same period in 2019. Account openings in March were up 60% on the previous month.

You can anyway trade for free in the UK, too, with FreeTrade1.

Other explanations for the trading craze point to the sports shutdown – which also kyboshed the gambling business – or to how millennials grew up watching the market recover from every setback, and now want their piece of the action.

But maybe the boom in traders was simply because billions of people were sitting around at home bored and self-isolating?

During lockdown we meet our friends online, date online, get our rocks off online (maybe no big change there), and learn how to bake sourdough online.

Why not go all Wolf of Wall Street online, too?

There’s nothing dumb about investing during a bear market. A crash means shares are cheaper, and expectations for future returns higher. With a long-term view it’s rational.

It’s not how people usually behave though – that’s the point. Share trading mania is associated with markets soaring, not slumping. Think dotcom boom or Bitcoin bubble.

This is what makes the surge in interest during the coronavirus crash so remarkable.

You too can lose money on the stock market!

The point is: millions are now in shares who weren’t just six months ago.

And some pundits say they’re already having an impact – mockingly pinning the recent ‘irrational’ rally on these smartphone traders buying Tesla and Zoom while the smart institutional money sits on the sidelines.

I don’t buy that.

For a start I don’t think the smart money is all that smart when it comes to market timing.

Besides, I welcome this legion of new investors.

I’ve heard podcasters laugh at their exploits, but we all begin somewhere. I also believe capitalism works best when more of us think like capitalists – rather than just leaving it to the 1% to get rich.

More people investing in shares means more chance of spreading it around.

And that’s the one thing I am worried about.

Because the statistics behind short-term / day-trading are brutal. Most people who try to trade lose money. The vast majority will lag super-simple investing that uses index funds.

Day-trading is not only very hard to profit from – it’s too much fun to be profitable, unless you happen to be running a brokerage:

Losing money makes you want to go back for more. Las Vegas wasn’t built on the triumphs of its punters, but on the takings of the house.

And in the long run, the house nearly always wins.

People choose day-trading as opposed to trying their hand at freelance tax accountancy because one seems exciting and the other insanely tedious.

But the truth is that if you want to make easy money, you should do something hard.

I’d be a hypocrite though if I didn’t admit that I am an avid active investor myself.

So next week I’ll share 12 tips for new traders that might help set you off on the right path with stock picking. Subscribe to make sure you get it.

Why do you think the share trading boom has taken place during such a grim time for society and the economy? Let us know in the comments below.

If you want to try share trading, do so for free with Freetrade. Sign up via that link and we both get a free share to get you started. The Interactive Investor link in this article is also an affiliate link. These are marketing costs for these businesses, and doesn’t affect the price you pay.

Previous post: Negative yields on bonds: what do they mean?