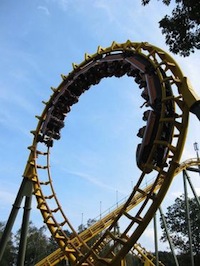 This is the first part of a two-part article on the summer swoon in the markets. Today I consider the inherent contradiction between strong bond and share prices. Tomorrow we’ll look at the fallout.

I try not write too much about the market’s gyrations. For a start, most readers are best off ignoring the noise and dripping money into passive index funds. There’s plenty of importing things to learn about investing, but what’s making the headlines on CNBC is rarely among them.

Also, it’s easy to be wrong when you make economic or market predictions. Being wrong is bad enough when you lose money. It’s doubly hard being wrong in public!

The thing is, I have been an investing genius since March 2009.

Unfortunately, most other people have been, too. Shares, bonds, oil, London property, gold – you name it, it’s nearly all gone up.

We can’t all be right, can we?

Regular readers will know I’ve been near-fully invested in equities since 2009. And unlike others who laughed at anyone bullish on shares until the bounceback was well underway and they claimed to be buying, I was consistent – happily posting that the market could be set for a decade of 20%-plus returns in May 2009, for instance.

I got a few things wrong but the main things right, and more than doubled my net worth in under two years. Not bad (try compounding it!) but not very difficult when the FTSE 100 itself rose 73% (before dividends) over the period, and investors like me with a small cap or emerging market tilt did better.

It’s been a genius making machine! And I was barely invested in the supersonic stuff, like oil explorers or gold. Some people have done far better, and can brag of being even cleverer.

But bull markets make everyone look smart – especially this recent market, where you didn’t even have to be very right to make money. While most invested in equities will have done well, the weird thing is so has almost everyone else, provided they dared to tiptoe out of cash.

In particular, US and UK government bonds have generally been a great investment. Corporate bonds, too.

The strength of government bonds has been a constant source of amazement – and reassurance – to me. You see, while the conventional view is that low government bond yields signal recessions, I’ve understood the low yields of the past two years as reflecting investor paranoia, ongoing ultra-low interest rates, and government largesse. All have correctly signaled good times for shares.

The fear part of the equation was certainly evident in late 2008, when US Treasury yields actually went briefly negative – one of my rare good calls on bonds. Otherwise, I’ve waited in vain for a good time to buy gilts, looking for a yield of 5% as far back as November 2009, which seems a reasonable call in retrospect given how RPI inflation has climbed above that level recently.

You’d usually expect bond investors to sell on the prospect of an ongoing negative real yield, to drive bond yields higher to compensate. But that hasn’t happened. In fact, gilt prices stopped falling and started rising, to the extent that the ten-year yield recently fell to 2.76%.

Two point seven six per cent! I can hardly believe it even when I spell it out. It’s a record low.

To buy gilts on such a snail-scraping yield, you need to believe inflation will be tamed, pronto, and that economic growth will be lacklustre, or else you’ll need to buy them for some other reason.

Asset allocation across a diversified portfolio is a good other reason. Bearish despondency isn’t. Speculation by active traders such as hedge funds – about the only money moving the markets nowadays – is another likely cause.

Bonds on a bull run

Of course, you might be buying gilts because you’re the Bank of England implementing quantitative easing. Or perhaps you’re a pension fund forced to buy gilts by dubious regulation.

Either way, a UK stock market that rises 72% even as gilt yields plunge to 2.8%, gold breaches $1,645, inflation tops 5% and prime London property surpasses its pre-crunch highs is a curious conundrum.

But does anybody seriously believe that government bond yields will fall further from here – and hence bond yield prices rise still higher? Sure it can happen – look at Japan – but it’s a fearsome prospect.

In contrast to government bonds, which haven’t so much climbed a wall of worry as dismissively vaulted it like a skilled practitioner of parkour, equities do not look expensive, even after their recent heady advance.

This graph of yield ratios from broker Brewin Dolphin is pretty revealing: 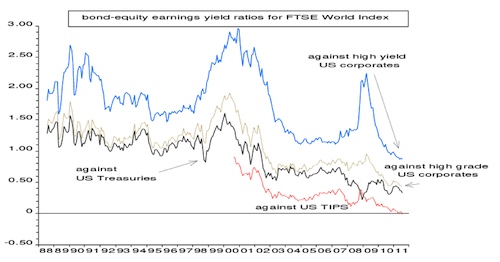 What this shows us is that the earnings from equities haven’t been more cheaply-rated in the past 23 years, compared to those from bonds. Either people really love bonds nowadays, or they really hate equities

Indeed, the ratio of less than one shows that investors would rather buy the fixed income from riskier high yield US corporate debt (blue line) than the earnings of similar companies, despite the latter’s potential to grow earnings forever into the future, and both asset classes being exposed to company failure.

Investors might prefer bonds because they fear corporate earnings are peaking. A second graph from the same source shows they might (superficially) have good reason to doubt the S&P can sustain its level of earnings: 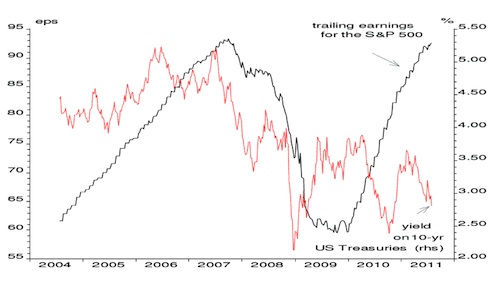 I say ‘superficially’ because someday even these earnings (black line) will look like molehills against the mountains – total earnings should inevitably go up in the decade’s ahead, if only because of inflation. The mirroring of 2007’s peak is therefore pretty irrelevant – it’s just a dollar number, not a stretched ratio.

What’s more, 2007’s earnings were in retrospect puffed up by all kinds of credit boom frothiness. While doomsters may argue otherwise, I don’t think you can say the same about today’s earnings.

As far as I’m concerned, companies are leaner, meaner, and increasingly draw their earnings from overseas. They’ve worked hard for this income in a housing boom-less, de-leveraging Western world.

P/E ratios for the US and UK also indicate fair-to-undervalued equities to my eyes. True, the longer run Shiller PE 10 ratio (which computes P/E based on 10-year earnings) suggests at least the S&P 500 is over-valued, but unlike many I’m not very convinced by the predictive qualities of that methodology.

In part two: What you, me, and the government should do with our money!

Next post: A good time to be investing: For governments, and for most of us