The value premium in a nutshell

Loading up on the value premium is the financial equivalent of exploiting the sick and the weak. You’re putting the returns of vulnerable companies to work in your portfolio.

Why? Because in the past they’ve proved capable of delivering better results than glamorous growth stocks such as Facebook or Apple.

This extra return available to investors is known as the value premium and it’s one of a suite of return premiums that can power up your portfolio.

But it’s completely counter-intuitive. How can a spluttering firm possibly hope to outshine a trailblazing company whose brilliant ideas are catching fire across the globe?

Well, it’s important to understand we’re not talking about pitting some ailing local newspaper group in a mano-a-mano pit fight with Google.

What we are saying is that the relative average performance of ‘value’ companies has been better than ‘growth’ companies, as a group and over long periods of time.

Why should that be?

There are two main explanations as to why value companies outperform.

One is that investors tend to overpay for growth companies. They get overexcited about the possibility of discovering the next Google and so shell out too high a price for the golden ticket.

Many growth companies don’t live up to their billing and, as a group, they can’t generate the returns that justify their high valuations. In comparison, value companies are underrated. They thus have the potential to bounce back.

The other explanation is that investors wrinkle up their noses at the stench of decay lingering around value companies. They know value companies are risky. Rightly enough, they want to be compensated for taking on that risk with the prospect of a higher expected return.

Value companies have to go cheap in order to entice investors. Think of the bargain shelf in the supermarket full of battered and bruised products at knockdown prices. 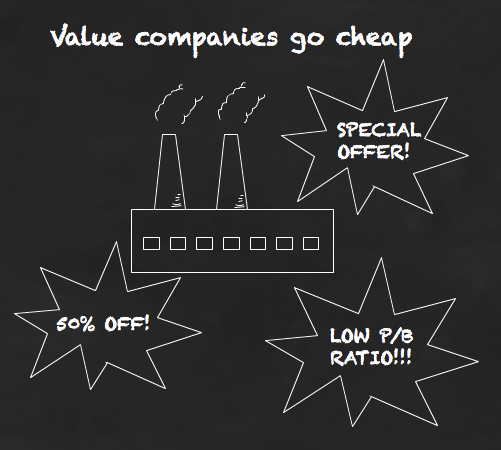 How do I spot a value company?

A value company generally has a low market price in comparison to a series of stats that measure its financial health. These stats are often described as a company’s fundamentals.

A value company will have a low price in comparison to its:

Lower ratios can indicate that a company is undervalued and so could turn up trumps if its situation improves.

Equally, the subdued prices warn that the company is wobbly.

Value companies are often characterised by high debt levels, volatile earnings, and volatile dividends. They are particularly likely to be punished in times of recession, when they lack the agility to respond to worsening conditions because they:

All this is why there’s very real risk attached to investing in value companies.

Although you can diversify away individual company risk by investing in a fund or ETF, value companies as a whole can get pummeled for protracted periods.

These numbers explain why some investors, including me, are persuaded by the research to devote at least some – perhaps 10% – of their equity allocation to passive funds that follow a value strategy.

But beware, the value premium has been negative for four of the last five years between 2007 and 2012 (in the US).

There’s no guarantee that the premium will perform well – or even persist – into the future. That’s the risk for which we hope to be rewarded.