Continuing our voyage to the outer limits of the passive investing universe, it’s time to probe another of the return premiums – those strange and mysterious wonders of the financial medium that can power your portfolio like a rocket ship.

One of the more potentially potent of these energy sources is the profitability factor, otherwise known as the quality factor.

In other words, if you can uncover wonderful companies that are cheap at the price, then you can potentially skim off a return premium that’s as strong as the value factor.

The secret is to find the companies that will be profitable in the future and avoid the ones that won’t.

Gross profitability is the ratio of a firm’s gross profits1 to total assets. Gross profit is a measure you’ll find near the top of a public company’s income statement.

If a company’s sales far exceed the costs of making those sales (such as the drag of raw materials, overheads, and employee wages) then its gross profit will be strong and likely to persist in the future.

Most investors judge companies on net profit after deductions for R&D, advertising, depreciation and so on. That means that heavy investing in brand-building and innovation can make a company look less profitable in the short-run.

Yet those are precisely the moves that reinforce a company’s capacity to compete in the future. 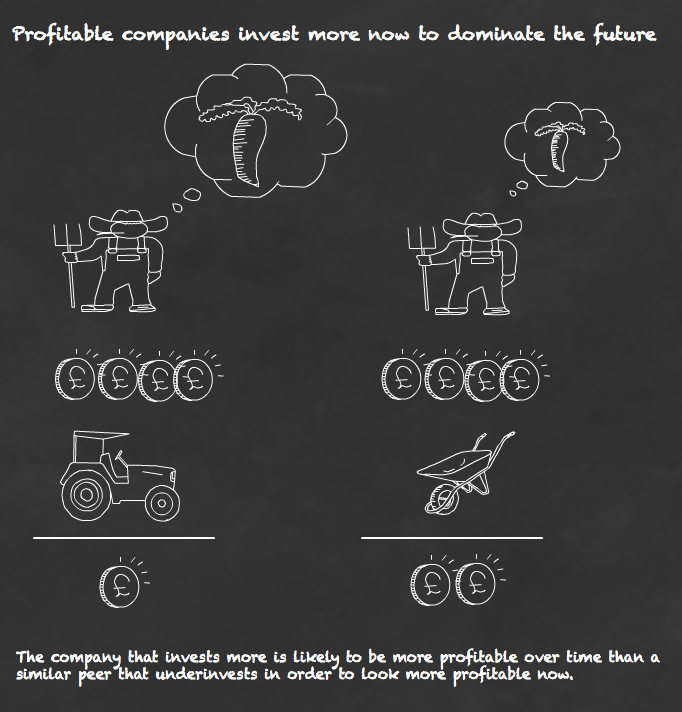 The insight of gross profitability is that it doesn’t knock out companies that are making long-term investments in favour of competitors who look profitable now because they are skimping on tomorrow.

Amazon is a classic example of a company that’s delivered mediocre net earnings because it’s spent billions on enough drones, robots and other assets to try to own the future. Its profits look far healthier when unmarred by this spending that may yet enable the retail giant to lay waste to the competition in the years ahead.

But perhaps drone deliveries are a flying white elephant?

Therein lies the risk, and the possible seeds of an explanation for the premium.

How can profit be risky?

Why should profitable firms offer a greater return than unprofitable ones? Surely it should be the other way around, as we expect bigger carrots to be dangled for taking on bigger risks?

Theories abound. Perhaps profitability is riskier than it seems because:

Think of the spread of risks as similar to betting on whether the talented school football captain will play for England versus whether the school psycho will go to prison. Psycho is more likely to fulfil expectations.

In addition, most return premiums exist at least in part because of flaws in investor behaviour that humanity finds tough to rectify.

The nerve-racking thing about the return premiums is that although they offer the prospect of beating the market, there is a chance that the good times may never materialise.

If the profitability premium simply owes its existence to behavioural flaws then those flaws may be arbitraged away.

By contrast, risk persists – but isn’t certain to pay off. Just like the general stock market might flatline for 20 years, any of the return premiums could fail to deliver for years and years on end.

All the same, profitability has a number of exciting features that make it particularly enticing for anyone who’s already decided that the return premiums belong in their portfolio.

And if you’re already convinced of the case for profitability then take a look at our review of the UK’s quality factor ETFs.

Next post: When too many fees mean you’re last to get fed

Previous post: Weekend reading: Set your own agenda to better manage your time