Think someone can pick market-beating funds for you? Don’t bet on it… 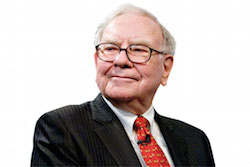 I am not sure what I’d have to be smoking to make a public bet against Warren Buffett in the field of investing. But I am sure a libel laywer would have a view.

So let’s just say Ted Seides was overconfident when he took the other side of a wager against Buffett back in 2007.

The bet? That no investment professional could pick five hedge funds that would beat a cheap Vanguard S&P 500 index tracker fund over a 10-year period.

Warren Buffett has dedicated his long life to becoming the world’s richest man1 through investing. The proof is in the pudding. He has very little to gain from winning this bet – even today his firm is a quasi-active investment vehicle, and he promotes index funds for fun not profit – whereas the downside is a lot of egg on his face. You’ve got to think he was confident.

I mean, making an investment bet against some hypothetically nervy, sleep-deprived, drug-addled Buffett might be conceivable.

But Warren Buffett confidently writing to his faithful shareholders in his annual report that nobody would win such a bet?

Back away slowly, keeping a tight hold of your wallet.

Here are some things where I’d back myself in a bet against Buffett:

Here are some things where I wouldn’t bet against Buffett:

Buffett is a stock market genius. Trackers are cheap and their returns trounce most active funds over 10-year periods. Hedge funds are insanely expensive, and even their best managers face a mighty struggle in overcoming the hurdle imposed by the high fees they charge.

Talk about a loaded deck.

Seriously, it’s one thing to get rich selling active management magic that costs your clients 2-and-20.

It’s another thing to actually believe in it.

On a personal level, Buffett says he likes his opponent in this wager. Seides does come across as a decent sort, and I certainly admire the fact that he – as a co-founder of investment firm Protégé Partners – put his money where his professional mouth was.

I mean, with trillions under management for their clients, and millions – if not billions – in the bank, you’d expect a scrum of hedge fund managers would have been falling over each other to put the yokel from Nebraska back in his place.

What a great advert for the hedge fund industry beating Buffett would be! Surely they all jumped at the chance?

Of course not. Hedge fund managers are not dumb.

Seides stepped up though, and you have to admire that. I always have a soft spot for the trooper who volunteers to take the pistol with two bullets from the Captain and heads out into the snow to seek a miracle while the rest of his comrades huddle safely in the bunker.

But where Seides really made life hard for himself in his suicidal bet against Buffett was that he didn’t just pick five hedge funds. He picked five funds of hedge funds.

This means Seides’ selections compounded the high fees charged by hedge funds with another layer of fees on top, from the fund of fund managers.

This is a bit like inviting termites onto your leaking rowboat. Money is soon pouring out of every (mixed) metaphorical orifice.

Lars Kroijer wrote an article for us about fund of fund fees. He estimated that for every $10 of return generated by the underlying funds, the actual investor might get to keep $3.

To be fair, we must remember that back in 2007 hedge funds as an asset class hadn’t yet wracked up a diabolical decade of market-lagging returns.

They have now. When Pension Partners surveyed the scene in 2016, it found that:

…since the start of 2005, the HFRX Global Hedge Fund Index and HFRX Equity Hedge Index (two investable indices widely used as benchmarks in the industry) have posted negative returns (-1% and -6.4% respectively).

The odds were against Seides. But he might still have had a tiny chance of winning if he’d tried to somehow alight upon those few funds in the $4-trillion industry that delivered decent returns after fees over the past nine years.

However by opting for funds of funds, Seides reinforced that huge cost hurdle by condemning his returns to mediocrity, via five flocks of mutton dressed as lamb.

In his annual letter to shareholders, Buffett reveals the gory results with just one year to go:

Forget beating the S&P 500 as a group. Only one fund of funds has got within shooting distance of the index, and even it trails it. The rest are woeful laggards.

It’s safe to say that Buffett’s nominated charity can already start to think about how they will spend his winnings.

I estimate that over the nine-year period roughly 60% – gulp! – of all gains achieved by the five funds-of-funds were diverted to the two levels of managers.

That was their misbegotten reward for accomplishing something far short of what their many hundreds of limited partners could have effortlessly – and with virtually no cost – achieved on their own.

In my opinion, the disappointing results for hedge-fund investors that this bet exposed are almost certain to recur in the future. […]

When trillions of dollars are managed by Wall Streeters charging high fees, it will usually be the managers who reap outsized profits, not the clients.

Both large and small investors should stick with low-cost index funds.

Buffett also mentioned that he always recommends index funds to friends, but that only those of modest means and little business knowledge follow up on the idea. The financially successful feel short-changed, and seek better returns elsewhere.

This has been my experience, too. While I’d obviously wish my own friends better, from a societal perspective long may this vanity tax on the rich continue.

I happened to see an interview on CNBC with a City professional on Monday morning, after Buffett’s letter had been released.

The gist of the interviewer’s question was that if investing legend Warren Buffett says people should use index funds, then why shouldn’t people use index funds?

To his credit, the Cityboy looked momentarily terrified.

(Note to Ted Seides: When you’re up against Warren Buffett on the subject of investment advice, terrified is the appropriate posture to adopt).

Perhaps remembering who buttered his bread, the sacrificial lamb eventually spluttered back to life. He agreed that trackers were okay for those without financial advice, but that “hard work” and professional expertise would always be able to find you those funds that outperformed.

This is nonsense. The correct statement is they might, but the odds are against it.

Hard work is always trotted out by active apologists, but almost everyone in finance works hard. And picking market-beating fund managers is the same zero sum game that active investing is, only the downside has extra knobs on due to even more fees.

By any measure Seides is an accomplished professional. If he can’t find five funds that will beat an S&P Index fund – with $500,000 of his own money on the line – then do you think it’s likely your local financial advisor on the High Street in an office above a kebab shop will do any better?

Warren Buffett is a rare kind of unicorn. Rather than tell you there’s a whole pasture of his type over the next green hill, he advises you to look for a workhorse instead.

Buffett readily agrees that some fund managers will beat the market. Besides himself, he believes that in his lifetime he’s identified – at that start of their careers, when it actually mattered – a whole ten!

The problem simply is that the great majority of managers who attempt to over-perform will fail.

The probability is also very high that the person soliciting your funds will not be the exception who does well.

Why bother? Invest passively, and get a market return at the lowest price. By all means pick stocks if you love business and the challenge like I do. But why pay a fund manager to have the fun of delivering a lower return on your behalf?

And whatever you do, don’t pay twice for an active fund of funds.

(A passive fund of funds is a different and vastly cheaper kettle of fish. We approve of those).

Next post: Weekend reading: Why is Nest making active decisions about worker’s pensions?