Passive investing is winning despite the fog of war 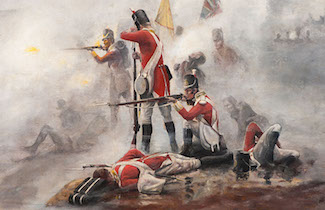 According to Vanguard, passive funds are set to double their market share in Europe. Vanguard believes that over the next 10-15 years, passive’s slice of the pie will swell from 15% to more than 30%.

Yum, yum, says the indexing giant. The company already manages $4 trillion of our money but it wants more. It’s now calling for regulators to slap ‘health warnings’ about high fees onto expensive funds.

Maybe we should go whole hog, and insist on gory fag packet-style horror photos inserted into swanky fund literature? Emaciated and impoverished pensioners eating discount pot noodles in the rain, splashed by Cityboys screaming past in sports cars – that sort of thing?

Ouch! Don’t ask Mr Buckley if your bum looks big in those.

Tighter regulations such as MiFID II are set to further increase the cost of running funds. Ironically, this will probably also decrease competition by making it harder for new entrants to get started.

My own cursory look into the costs of setting up a little fund manager has persuaded me that to get rich running other people’s money, I’d have to be rich to begin with.

Low costs mostly come from economies of scale. So it will be left to the current incumbents – active and passive – to slug it out in a price war.

And costs matter because active investing is a zero sum game.

Well, almost a zero sum game. Probably. There are a few quirks that muddy the waters.

Previously we’ve not had to pay these too much attention. Some make your brain hurt. But as passive investing grows and eats up the investing landscape like a sci-fi blob from the 1950s, people are going back into the footnotes of the passive thesis and looking for caveats.

I’ll do so too in a future post. I’m no professor of economics, but for what it’s worth I believe these quibbles are of academic interest at most to the average investor, and don’t change the main argument for using market cap weighted index funds.

Anyway, many people even haven’t grasped the main argument yet. Let’s have a quick reminder.

Investing in itself is not a zero sum game. You and I can both make money in the stock market, without competing against each other.

As the economy expands, the total sales and profits of listed companies will grow. As owners of companies – whether through active or index funds – we’ll benefit as the market puts a higher value on our firms churning out ever heavier wheelbarrows of cash. We’ll also get dividends from the companies we own, whether via direct shareholdings or through funds.

So far, so good for everybody.

Here’s the zero sum bit. In order for £1 that’s invested in an active fund to win against the market – that is, to outperform the market – somewhere £1 of active money has to lose.1

That’s because ‘the market’ consists of only passive indexing and active funds.

And passive funds follow the market, so we can net those out.

This leaves the active funds (which includes smart beta ETFs and the like) trading amongst each other.

They profit at one another’s expense, but in aggregate they earn the market return.

And as they also charge higher fees, they must therefore do worse than trackers.

This logic was established more than quarter of a century ago by Nobel Prize-winning author Bill Sharpe. Read his paper, The Arithmetic Of Active Management, and see for yourself.

However be warned you might still feel befuddled afterwards.

I don’t blame you. It took me years to properly wrap my head around this stuff. I’m sure there are old articles on this website that aren’t completely on-point.

You see passive investing is a weird concept. It feels wrong compared to our everyday experience. I’ve noticed even many financial professionals don’t really understand the theory behind it.

“Now is the time when stock picking funds will prosper over passive.”

“In this particular area of the market, active funds will always beat index funds.”

If you follow the zero sum logic of investing, you know such statements must be false. Maybe you’ve even rolled your eyes at their self-serving deception.

However I’m confident that in some cases those people don’t actually understand the active/passive arguments.

Here are some other wrong-headed things I’ve heard recently – in person and in the media – that I’m pretty sure weren’t meant as deliberate falsehoods:

As more people invest passively, it’ll definitely be easier for active funds to beat the market.

Active funds will do much better than passive when markets are falling because they can get out of expensive stocks.

Active funds can prey on the dumb money in index funds.

The growth of passive investing has made markets less efficient and more volatile.

Index funds are poor performers, but at least you don’t pay much for their poor performance.

When you want the best brain surgery, you pay for the most expensive surgeon. Same thing applies with investing.

Passive investing is dangerous, because the dotcom crash / financial crash / whatever proved markets are not efficient.

Or: Markets need to be super-efficient for passive investing to work – and they’re not.

A hard-working fund manager can always beat the market.

You should invest in index funds because no active managers can beat the market.

The advanced version: You should invest in index funds because no active managers can beat the market over the long-term.

I haven’t got time to watch CNBC for 10 hours a day, so I just invest passively. It’s better than nothing.

Most of these dubious statements stem from not understanding the zero sum argument or not thinking about what it means to say markets are efficient. People also forget the huge role of luck.

But rather than debate each point myself, I’m going to direct you to a podcast on Bloomberg. (Unfortunately I can’t embed it here.)

Poker, passive investing, and a podcast

The latest episode of Bloomberg’s Odd Lots podcast – How Poker Explains The Battle Of Active And Passive Investing – centers on a paper by Michael Mauboussin, a bigwig at Credit Suisse who has long been unpicking the role of talent and luck in investing. (See his book The Success Equation).

The hosts of Odd Lots are smart, and I listen to their show most weeks.

However to illustrate my point, at least one of them doesn’t seem to understand the zero sum aspect of active investing at the start of the interview – and I’m not sure about the end, either.

But Mauboussin is patient and convincing, and well worth listening to. He’s interested in the game of active investing as well as the remorseless logic of passive. (A kindred spirit!)

Mauboussin also briefly mentions a couple of those edge cases that people sometimes bring up to contest the zero sum thesis.

As I say these – and the others he doesn’t mention – don’t change the best practical approach for everyday investors, as far as I can see. Certainly not right now, in 2017.

They will also not support a multi-trillion dollar active management industry.

After all, even if there are loopholes in the theory, the woeful market-lagging performance of most active funds in practice means such caveats are barely relevant in the real world: 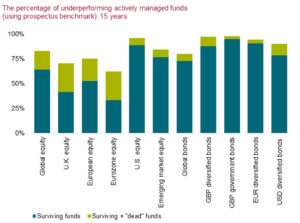 Vanguard found 64% of active funds underperformed in the 15 years to the end of 2016.

Pretty compelling. Still, the arguments raised against the pure ‘zero sum’ mathematics do stretch your brain a bit. I’ll take the pain in a future post.

For now, get up to speed with the Bloomberg podcast. It’s a good listen.