The raffish charm of fundamental indexing

A friend of mine used to torment himself with visions of a suave bogeyman named Dex. The imaginary Dex was better looking, richer, and more virile in every respect. And he prevented my friend from forming meaningful relationships. Every attempt was self-sabotaged by the fear that somewhere out there lurked Dex, ready to steal his beloved away.

Yes, my mixed-up friend had trust issues. And so do I when it comes to fundamental indexing.

It’s newer, glossier, cooler (flying under the beguiling ‘smart beta’ banner) and it has a smooth line in proprietary patter that promises good times ahead. 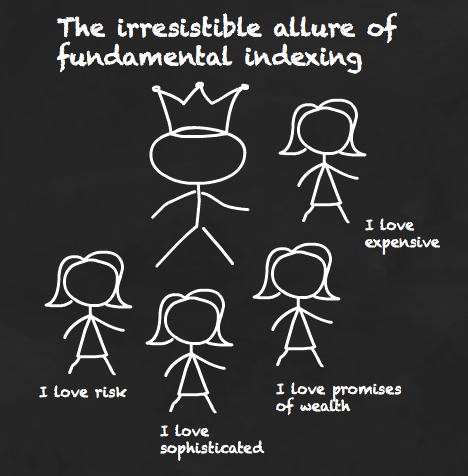 I’m attracted to fundamental indexing because it offers the chance to capitalise on the value premium. That premium has been worth around 3.5% per year to UK investors over the last 50 years.

There are a few fundamental indexing options available in the UK. First Trust Advisors AlphaDEX (note the Dex!) ETFs are the latest sophisticates, but the main players are the Invesco Powershares FTSE RAFI ETFs.

So how do these smart beta trackers work?

Inside the mind of the Dex

The first thing to note is that fundamental ETFs do not follow a traditional market cap index.

In other words, if company A is ten times the size of company B by market value then it does not automatically get ten times the presence in a fundamental index. That style is out like corduroy slacks.

Traditional market cap indices struggle to defend themselves against the accusation that they bloat up on overvalued equities, mechanically shoveling in more of the hot stuff like a compulsive eater – especially when the market is frothy.

In contrast, fundamental indices are meant to break this impulse by choosing equities according to a different menu.

In the case of the FTSE RAFI ETFs, their index encompasses a broad universe of equities, just like a vanilla index tracker.

However the FTSE RAFI indices rank their constituent companies not by market cap, but by four valuation metrics:

These company ‘fundamentals’ are well known health indicators that transmit information about the underlying state of the business.

They are also the source of the value premium, and fundamental indices are tilted in favour of equities that are cheap on those measures.

Also, because a RAFI index uses the average of the last five years’ worth of sales, cash flow and dividends for each company, its rankings are less influenced by short-term noise than a market cap index.

And that’s a good thing…

Who cares what the world thinks? As long as I have you, Dex

…but what if that noise turns out to be news? (Think what 3D printed guns might do to Smith & Wesson!)

Then the RAFI indices will be more slow to adapt to the new reality.

Every time a RAFI index rebalances (once a year) it’s mostly using historical data to determine its rankings – data that only partially reflects the troubles of a recently impaired firm. So whereas distressed firms automatically sink in a market cap index, they actually rebound back up a fundamental index.

That’s absolutely fine if you believe the market generally over-reacts to bad news, and such companies are reputedly the source of some of the value premium. But we underestimate the wisdom of the market at our peril, and a strategy that doesn’t screen for distressed companies piles on the risk as well as the potential for greater returns.

The risks of fundamental indexing are highlighted by a comparison of the Powershares FTSE RAFI 100 ETF (PSRU) against its market cap rival – the iShares FTSE 100 ETF (ISF).

The FTSE 100 suffers from diversification risk in the first place, but the fundamental version is even more concentrated:

Fundamental products are also typically more expensive than market cap trackers and PSRU is no exception. The Ongoing Charge Figure (OCF) is 0.5% versus 0.4% for ISF and a tiddly 0.1% for VUKE – Vanguard’s FTSE 100 ETF. And that doesn’t take into account costs that show up in tracking error.

Riskier, darker, more intense, more money… how can you resist the RAFIsh charms of fundamental indexing?

Well, in this follow-up post, I explain why I have my doubts.

Previous post: Weekend reading: Grantham on the race to save civilisation