The brave new world of the Ongoing Charge

It’s like the sinister moment in a film, when the lead character is replaced by a dead ringer with a mole in a slightly different place. While we investors carry on with our daily lives, the familiar old Total Expense Ratio (TER) is being quietly removed from the scene, and the Ongoing Charge inserted in its stead.

Both figures do much the same job, by providing a comparable number for the cost of investing that we can use to pit funds against each other.

But the difference between the two doesn’t amount to much more than parting their hair on opposite sides.

It leaves me wondering what on Earth is the point of the change? 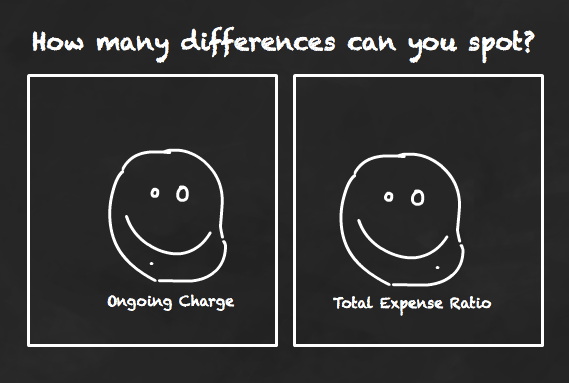 You’ve got to be KIIDing

The Ongoing Charge is essentially the percentage of your fund holdings that will disappear in costs every year.

For example, if you have £1,000 in the Magical Unidirectional Gain ETF (MUG) and its Ongoing Charge is 0.5%, then you will pay out £5 a year in charges:

This charge is deducted from the return of fund rather than directly from your pocket, but it does not include all the costs of owning a fund (never mind the other costs you pay out to brokers and so on).

The shopping list of expenses that the Ongoing Charge represents appears to be indistinguishable from the TER, barring a few technical differences. And my random sweep of a handful of index funds and ETFs from various providers suggests that Ongoing Charges and TERs are practically the same in most cases.

The major exceptions are the HSBC index funds that feature prominently in Monevator’s Slow and Steady portfolio.

TERs for these funds have all jumped in the transformation to Ongoing Charges. The most extreme case is the Pacific fund, which has an Ongoing Charge of 0.46% in comparison to a TER of 0.37%.

But why the change in the first place? As if to underline the negligible impact it’s made, most product provider’s websites are swapping between the terms TER and Ongoing Charge as freely as Genghis Khan swapped between wives.

The price is not right

Created in a fit of regulatory spring-cleaning, the Ongoing Charge is meant to tidy up the nagging suspicion that the Total Expense Ratio confuses the hell out of investors because:

So what significant fund costs are missing from the Ongoing Charge?

Frankly, the change is a cosmetic one and falls a long way short of providing investors with a simple to understand figure that represents the true cost of investing.

The Ongoing Charge is about as accurate a price tag as the face value of a low-cost airline ticket before they’ve bolted on your baggage fees, credit card fees, and breathing oxygen charges.

In terms of progress, it feels about as significant as the invention of the blue Smartie.

Next post: How to create your own DIY corporate bond portfolio