What are the risks of being out of the market?

It’s easy for passive investors to get wound up by the arrival of cheaper funds. We’re all about cost management, but should we leap like a lizard every time a new fund turns up with a slimmer Ongoing Charge Figure (OCF)?

We’ve previously looked at how to calculate whether the cost savings are worth the hassle of switching funds. But an even bigger consideration is the chances of wild and dangerous Mr Market moving against us.

If you trade from one index fund to another then you’re likely to spend a significant amount of time out of the market due to the way the system works.

If you swap between two index funds that track the same index, this delay means: 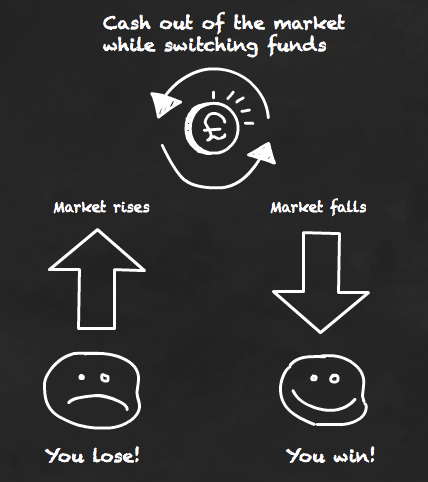 How long will you be out the market?

Happily the dance doesn’t have to take that long. If you ring up TD Direct on the second day after the sale, it can tell you how much you raked in and will buy the next fund. Move quickly and you could get your buy order off that day. Your time out the market is reduced to two days.

Check with your broker for its own timetable.

Popping champagne corks at City trading desks are a fearful sign for us when we’re switching funds. A good day for the markets is a bad day for us if we’re not in the game.

The FTSE 100’s best day ever was a 9.84% rise on 24 November 2008. The second best day saw an 8.84% boost. I’ll use these movements to model our worst case two-day scenario: where the first rise was followed by the second. In reality that didn’t happen and no fund-hopping passive investor will have had a comeuppance quite this bad. Yet.

You can simulate these movements well enough by using Candid Money’s investment charges impact calculator to work out the effect of asymmetrical costs on each fund.

We’ll take a look at the impact of such an adverse market movement using the Salami Slicer example from our previous fund switching post. In this instance, our new fund is only a sliver cheaper than the old – it’s OCF is 0.2% versus 0.3%.

Our old fund would have been worth £11,954.991 if we’d just left well alone. Instead, we have a paltry £10,000 to put into the new fund, which has experienced the same accursed good fortune over the two days.

Still, we’ve got 20 years of cheaper OCFs to look forward to in the new fund. Let’s see what the trade-off has brought us:

The market swing against us – in just those two days – is something we never recovered from in this Doomsday scenario. That’s despite 20 years laughing it up with a slightly cheaper fund.

In contrast, an investor with all the dynamism of a cabbage ended up nearly £5,000 better off than us, because they did nothing. Our move proved to be the financial equivalent of blasting our own feet off.

So much for knowing all about the funky new funds.

Okay, so far so ill-advised, but that was an extreme case. What might the markets do to us on a more average day?

To give us a rough idea2, I’ve had a grapple with daily pricing data for the FTSE All-Share index. Thanks Yahoo Finance!

Daily prices are available from 4 January 2000 to 11 January 2013, which is long enough for our purposes.

Back to our example. We sold our fund for £1o,000, but this time the market carried on rising without us at 0.658% per day for two days before we were able to buy back in.

Fund worth after 20 years cost savings:

Well, at least we’re up. After 20 years baking our investment pie with a lower OCF, we cash out slightly ahead.

Whether such a (potential) gain is worth the risk and effort depends on how devil-may-care you are, how long you invest for, the actual difference in fund costs, how much you invest, and the return you get.

It’s pretty obvious though that there’s no need to sweat small stuff like this. Especially as keeping things simple is the essence of passive investing.

Hey, wouldn’t we profit more if the market fell?

The ability to trade ETFs all day long makes them less risky than index funds when it comes to a quick switcheroo. You’ll lose a bit on the bid-offer spread, you’ll pay a dealing fee to buy and sell, but you need only be out of the market for a few minutes thanks to real-time online trading.

I’m not going to worry about any change in price between the two trades. It would amount to pennies either way in a reasonably liquid ETF, assuming we’re not in the middle of a flash crash.

Fund worth after 20 years cost savings:

Well worth making the change, even considering the trading costs. (We’d only be a bit further ahead at £1,075 after 20 years if ETF trading costs were zero).

I’d definitely be more sanguine about switching liquid ETFs with tight-bid offer spreads, assuming I didn’t mind the bother and that I was trading at least £2,000 a pop. Remember ETF dealing fees can take big bites out of small trades.

My two posts on this subject have definitely failed the KISS test.

The first post demonstrated that it’s definitely worth the trouble to switch from high-fee active funds to reasonably priced index trackers, but we knew that anyway.

The benefits of switching out of a tracker with a sub 0.5% OCF are far more debatable and taper away the less money you have, as well as exposing you to the risk of the market moving against you.

There quickly comes a point where jumping ship isn’t worth worrying about.

That said, even if two trackers seem similar in cost, it’s always worth comparing their tracking error. That’s the true measure of an index tracker’s cost and can betray some hidden truths that don’t show up in the OCF.

Next post: Weekend reading: Why the rich should not give money to charity

Previous post: Weekend reading: The Fed didn’t see it coming (and neither did me or you)