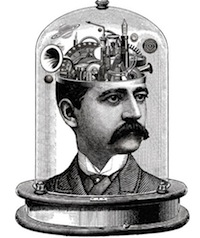 One reason passive investing feels wrong to new investors is because people don’t want to “give all their money to a computer”.

I know, because they’ve told me so.

They typically haven’t analyzed algorithmic trading or weighed up the pros and cons of software versus grey matter.

They don’t know anything about any of that.

Perhaps some family member picked shares or told them about a star fund manager that did well for them. Maybe they’ve read about Warren Buffett.

But usually it’s just another of those common sense things that trips people up when investing.

It’s common sense that a well-paid human being could avoid the Dotcom bubble or sell bank shares in a financial crisis. A computer can’t even read a newspaper!

A computer can’t appreciate the difference an inspirational leader like Steve Jobs or Elon Musk can make.

A computer doesn’t know about America’s shale gas boom, or the ageing population in China.

All a computer can do is look at the numbers and buy and sell. That’s one reason we have such volatile markets and booms and crashes, and why little investors get screwed over, et cetera.

Those are the sorts of arguments you hear – the latter ones often from more experienced investors, who really should know better.

But these views aren’t based on any evidence.

Most people haven’t read up on the algorithmic trading software used by hedge funds that can pick shares pretty well, on and off, nor have they seen the overwhelming data that neither human beings nor such ‘black box’ software can reliably beat the market for more than a few years, most of the time.

But it’s what they believe.

These sorts of views are why index investing is a harder sell than those of who’ve seen the evidence expect.

We’ve forgotten what it’s like to be a new investor armed only with common sense.

When we try to explain why cheap passive portfolios will beat the majority of active investors, these fears are lurking in the background, unvoiced by the listener and forgotten by us.

So I had a light bulb moment when one friend of mine, M., put it into words.

After hours of discussion about investing over several days (she’d inherited an estate and asked me about it) she’d had enough:

“Index investing? Okay, I get it! Computers buying what is up and selling whatever is down? It’s random! It’s stupid! I’m not putting my family’s money into that, so can we please stop talking about it?”

To my friend, the stock market is a mass of numbers and an index fund chases them around the park.

Even if it might theoretically work, it doesn’t make sense to her.

Avoiding obscure or opaque things is actually a good guide to avoiding trouble when investing. The problem here was my friend’s knowledge was incomplete.

I must take some blame for that, because I’d clearly not explained well enough what a share price was, or why index funds work.

You see there’s nothing stupid about them.

On the contrary, they work because of all the brilliant human minds – and the clever computer software – that is constantly churning over every opportunity in the stock market.

Tens of thousands of the smartest people of their generation are raking over companies, looking for hidden advantages or drawbacks or other factors not reflected in their valuation.

When these managers think they’ve spotted something, they buy the shares – or sell them if they don’t like what they’ve found.

And who sells – or buys – these shares?

Another smart human being that also spends most of his or her working hours looking for such opportunities. Or a multi-million dollar stock trading robot that never sleeps at all.

When you buy or sell or a share, the other side doesn’t trade for any old price, either. They think they know something you don’t, or have under-appreciated. That’s why you have different views about the price worth paying.

And this is going on every fraction of a second. Millions of times an hour.

Which means the price you see in the market is the current ‘best guess’ according to the world’s greatest investors.

It’s very hard, if not impossible, to guess better.

Do you see why this is fabulous news?

Share prices aren’t pulled out of thin air. They move up and down as the smart money constantly reworks their valuation.

Excellent stock pickers have influenced the share price of every company in the FTSE 100. So when you buy shares via an index fund, you are taking advantage of all this brainpower at a very cheap price.

I explained this to M., and she had a bit of a light bulb moment, too.

She better understood what prices were, and that I wasn’t saying that fund managers were stupid. That offended her idea of humanity on some basic level, I think, as well as seeming unlikely given how well paid they were.

Certainly I am not saying they’re dumb. One reason index investing is the best option is because most fund managers are very smart.

Smart fund managers compete all day against other very smart people in an arm’s race that costs a fortune and that as a group they can’t win – because for every winner there’s a loser.

Hence it’s usually better just to get the average of their results as cheaply as you can via an index fund.

But there’s a but…

Is this index fund evangelism nirvana? Alas there’s a sting in the tail.

Maybe that’s because I felt duty-bound to explain to her the flipside of having all the smartest brains in the room pricing the shares in her index fund.

It is true the best fund managers are doing legwork for you when you buy the whole market.

But unfortunately, you’re also getting input – via prices – from all the worst fund managers, too.

You’re also getting the mediocre managers, and the hundreds of thousands of retail punters making clueless decisions or day-trading away their savings.

Everybody is involved in setting share prices. That’s the catch.

Far more money is smart than stupid these days, which is why you rarely see the obvious bargains that littered the market in the 1950s anymore.

And it doesn’t matter anyway, in practical terms. The evidence is clear – most fund managers do not beat the market and you’re unlikely to pick those who do in advance, so you might as well buy an index fund.

But we knew that already.

It was just that for a moment, we had a way to convert the likes of my friend to the indexing cause by playing the ‘smart fund managers’ card like the best of them.

But investing is far too tricksy for that.

Next post: Five lessons my father taught me about the value of money