Days of being wild: Part one – devolution 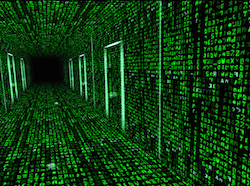 Many everyday investors buy their first share on a tip from a friend – or from the Government, via privatisations like we saw with the Royal Mail.

Some go on to make stock picking their hobby or even their passion, while others begin to invest in active funds.

Increasingly, index trackers and passive investing mark the final stage of this evolution, as people learn more about the high costs of managed funds and how hard it is to beat the market.

Ever contrary, I’ve done the opposite.

When I began putting my cash savings into equities more than a decade ago, I mostly used tracker funds.

Despite having been fascinated by both business and shares for years before that, I’d done my research and I knew that index tracking was the surest route to growing my wealth through the stock market.

However as the investing years rolled by, I strayed – or succumbed to the Dark Side, as my co-blogger The Accumulator put it when we debated our different approaches a few years ago.

And I entirely agreed.

After all, I knew what I was getting into. That was one reason I was so pleased when The Accumulator signed up to share his burgeoning passive investing knowledge with Monevator readers.

I wanted Monevator to continue to make the case that passive investing was the best route for most people, because I absolutely believe that’s true.

However I no longer considered myself the best person to make that case. I’d wandered off the map to a place marked Here Be Dragons.

As tears go by

For most of my nearly 15 years of investing I have traded very rarely and could easily ignore my portfolio for weeks or months at a time – even after I’d begun investing in individual companies and small caps.

Now, after the past three years (the point of this post, which honestly I’m getting to) even I find that hard to believe, but I only need to look back in my investment log to see that it’s true.

Below is a typically sparkling entry I made one day alongside the numbers I copied across from my various broker accounts, which I only ever did on particularly rainy days:

Uh oh, haven’t checked this for ages – thought I had!

This is going to be ugly.

Bottom has fallen out of HSBC, and so on.

Such deep insights: George Soros and his Alchemy of Finance

has nothing on me.

The date of that entry was 9 March 2009 – virtually the bottom of the financial crisis in the UK, a rout that had cost me many years of savings – and yet my previous entry had been back in October 2008.

What on earth was I doing that was so much more exciting in-between? Partying with models and rock stars? (Hey, I can’t remember, so it must have been a great party.)

More likely I was reading The Snowball

I was certainly following the bear market – I have dozens of blog posts to prove it – but I just didn’t seem to be that fussed about the short-term movement of my own portfolio in those days.

Fast-forward a few years though, and it’s quite possible that I knew the value of my portfolio on an hourly basis for some days in March 2015 – and certainly on any violent days like we’ve seen in the first couple of months of 2016.

Well, on a practical level I unitized my portfolio in 2012, and that weaponized the portfolio check-up process.

I’d hitherto made a deliberate point of not tracking my returns too closely because I felt doing so was likely detrimental to my returns (I still suspect it is) and to my mental health (I’m now doubly sure of that).

But back in 2012 I decided I needed to find out once and for all how much value – if any – my trying to be clever with shares was delivering.

I had hunches, ballpark guesses, and I’d done some back of a napkin maths. But I didn’t know for sure, and that no longer seemed like good enough.

I mean, I’d been blogging about investing for five or six years by that point, and while Monevator has always had a passive focus, especially in the earlier days I’d often shared my active opinions too.

So I felt like I needed to know more about the investor who was giving all those opinions (i.e. me!)

Moreover investing had begun to seep into my professional life.

So from the end of 2012 I started to track my returns via a largely automatically updated and unitized spreadsheet1 in order to see exactly how my investments were performing, without any distortion from savings or withdrawals.

The initial idea was just to continue to copy the most relevant figures over to that racy investment log I mentioned whenever I felt like it.

1. Now I could see my portfolio live at any time – and pretty much see my net wealth at the same time, given I invariably have between 75-95% of all my worldly assets in the market – I couldn’t resist following it more closely. My data was now just a click away, whereas before I’d had to log into several broker accounts to tot up various numbers to see where I stood.

2. I got to know a couple of people in the finance industry who suggested that as I was so clearly obsessed with investing, why wasn’t I interested in running a fund and earning mega-bucks? (Especially as some of the people they knew who did so hated it…)

The answer to that question is long and even more self-indulgent than this post, so let’s leave it for another day. (Here’s a taster).

However I did decide to follow some of their advice and to dutifully archive my returns on a daily basis, as well as recording all costs and so forth (which I was already doing via my unitised spreadsheet).

The idea was to create a three-year performance record, which is the minimum period for these types to get interested.

There was some talk too of recording and/or calculating daily volatility, Sharpe ratios, maximum drawdowns2 and all the rest of it, and even of trying to hedge out market exposure via a spreadbet or similar to create a sort of DIY long/short fund that might help highlight any alpha-generation capabilities I had – or “edge” as the hedge fund guys put it.

Well I’ll save you the suspense. Within 12 months I was bored or forgetful of recording daily snapshots, and worse I believed it was starting to affect my peace of mind (more on this anon).

So I never bothered calculating all that gubbins the typical fund manager’s platform automatically spits out for him or her alongside their profit or loss line at the end of every day.

However I did continue to track everything else, and I downloaded the returns of my portfolio and my various positions every week.

I also continued to record all money in and out through my unitised spreadsheet as part of this, and documented my buys, sells, costs, and so on.

I kick-started my uber-record keeping from January 2013, and it continues in a slightly toned down format today. (Everything is still unitised and I record monthly snapshots, but starting this year I’ve stopped recording weekly snapshots.)

So what have I got for my pains?

Well, for one thing I now have an industry standard three-year performance record that I can compare with any commercial fund’s returns to see how I measure up over that time frame, rather than guessing and potentially deluding myself.

I’m probably going to share this with you next week – not to try to persuade anyone that it’s a good or a bad idea to invest actively, but rather because I think I’d find it interesting if I was a Monevator reader.

Also, I’d like to put all this data I’ve hoarded away to some practical use!

In addition I’ve learned some interesting things about the difference between being an investor and a trader, and also how hard it is to unpick where edge does (or doesn’t) come from.

Most importantly I’ve discovered how much more stressful investing is when you really care about the short-term – when you know someone other than yourself might see your results – and as a consequence you can find yourself living with the market’s volatility from minute-to-minute.

If I’m honest it has probably affected my mental well-being and my lifestyle, and I don’t think for the better. More on that in a future post, too.

I’ll end this first part with a quote from Winston Churchill that I think is very relevant to this experiment I’ve been running, and to the changes that came with it:

Being able to easily see exactly where all my positions are at any time has changed how I think about those positions.

And knowing that someone might um and ah over the monthly (or even daily) ups and downs has reduced my tolerance for that volatility.

Whereas once I would go months without getting up-to-date return figures from my investments, I rarely go 24 hours these days.

Perhaps there were different responses I could have made to all these new stress points, but the one I found myself employing was to greatly increase my trading activity to try to dampen down the extremes.

Costs exploded. And I slept less well at night.

In the next part I’ll share my returns over the past three years, and in the final post I’ll reflect on what I’ve learned the hard way as I’ve increasingly explored trading versus investing. Subscribe to get these future posts via email.

Previous post: Weekend reading: Can we have too much of a good thing with indexing?