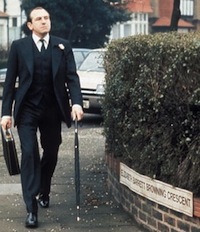 Today I woke up late and 10 miles from home. What a dirty stop-out, eh?

Not really. I visited a friend, the talk ran on and on, and I couldn’t be bothered to schlep back across London on the last tube home.

Instead we carried on until 2am (aided and abetted by a very nice montepulciano) and then it was spare room sofa-surfing for me.

My friend headed off to work early. I’m not sure exactly when he left, but given I had no intention of getting up at the ungodly hour I heard him go into the bathroom, it could well have still been dark.

I showered and strolled off to the train station much later, going crazy on the way and buying an outrageously expensive coffee from Starbucks, which I sipped lazily as I sauntered along in the sun.

It’s Thursday. What will my boss make of my attitude?

I can tell you he’s absolutely fine about it.

Because my boss is me.

The benefits of working from home

I often read retirement bloggers saying they quit work because they couldn’t take kowtowing to The Man anymore.

I understand – The Man sucks – but it’s not a good reason to quit working. Especially if you’re impoverishing yourself for the rest of your life to do so.

Most of these benefits are similar to those that people cite on retiring.

They don’t have to slog to the office every day. They don’t have to put up with petty politics. They can busy themselves in the garden when they want to, and they can take to the beach for that one sunny day in September.

All true of working from home.

Another non-nuclear option to get some control of your life back is to make your money as a freelancer or a contractor.

I know two people who work for 3-6 months then take the next six months off. I couldn’t – I’d be scared of coming home and finding my niche had been taken over by squatters – but one of them has been at it for years.

Less radically, my girlfriend does 6-8 week contracts, then has a week or two off.

She’s not in as much control of her time as I am, because she can’t decide exactly when her next gig should start and stop. But she’s better paid than me for it, and if she wants to take a Friday off, she can. She doesn’t have to ask anyone’s permission, provided it doesn’t derail her project.

A definition of being a genuine freelancer when it comes to HMRC is that you’re in control of your own time, which is important for both your client’s and your own tax status.

Handy, if anyone complains!

Now it’s true these options don’t give you the ultra-freedom of the fully retired.

To make my living working from home, I have to continue to excel for the clients I do work for. There’s no coasting.

I also put in the same 200 or so days of work that most people do (although I’m more productive than the majority, so I can work fewer hours if I like).

And do you want to know a secret?

In truth I do sometimes have to tip my hat to The Man or put up with silly decisions or hare-brained schemes, in order to take on an assignment that pays well or that keeps me on a great client’s books.

But working for myself, it’s never as annoying as in the Kafka-esque nightmare of a modern office – probably because you know you can reach for the ejector lever if you have to.

You also don’t need to have so many existential debates about what all that time spent at work is really worth, because you know what it’s worth.

Your hourly rate, minus tax.

Keeping up with the Micawbers

I used to dream of early retirement, but having lived off my savings a few years ago for a while, I now know it’s not for me.

In fact I hope to always continue to earn some income, although in time it’ll be increasingly from projects like property redevelopment or self-owned micro-businesses.

Maybe this blog will even make me some real money, some day!

I believe there are several benefits to doing some paying work, versus a full-time earn-nothing retirement:

Clearly one can over-generalise. A few people become much more engaged when they retire, perhaps because they can throw themselves into hobbies or communities that they never previously had time for.

But many people find their circles drawing in, and their horizons narrow. I’ve seen it, and I’m sure you have to.

Equally, there are some great examples of people on the Web for whom early retirement is just the start of the adventure of making their fortune.

Mr Money Mustache is clearly having a ball – and making a packet – ever since he retired.

However his form of retirement is to me more financial freedom. I know he hates this sort of semantic quibbling, but for me he’s doing what I’m doing, only I do far more short bits of freelance, and he does far more bike rides between renovation projects and super-successful website creating.

The point is there are far more ways to make a living than Reginald Perrin ever imagined.

If you truly know that the indignity of having to earn money is what you hate about the modern world, then making enough to quit is perfectly rational.

However if you hanker for the freedom to eat ice-cream in the park or to watch Wimbledon in work hours, or to put time into side-projects that the rat race shoves to the sidelines, then it’s worth figuring out if working from home or similar is a better way for you.

Beware! Like not going to university, working for yourself is an option that’s easy to get into but not so easy to make stick.

But for me the rewards have proved well worth it.

In fact, the only real downside is that the scope of your career is curtailed.

If you’re an expert in your field then you can still be part of exciting and/or lucrative projects, as a consultant or in some other part-time role.

This is true even at the highest level – the non-exec directors who make a packet attending a dozen company board meetings a year are in some ways the ultimate example of the lifestyle I’m describing.

But working as a contractor or a freelance, you’ll never feel the excitement of being at the heart of an Apple or a Virgin Atlantic or a Kath Kidston as they roll out across the world. Nor can you enjoy a vocation like heart surgery that inevitably ties you to your workplace.

Still, how many of us really enjoy any of that in our lives?

Clocking in at your nearest Wernham Hogg is hardly the stuff of dreams.

Good reads for your freedom plan: