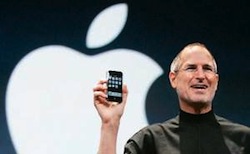 The death of Steve Jobs saw huge media coverage and an outpouring of emotion across Facebook and Twitter.

For those of us who were geeks before most people had heard of the word – let alone before it became a bit cool – it was all rather surreal.

Don’t get me wrong – I was adding to the eulogies, too. Steve Jobs has inspired me since I first encountered the Apple story back in the early 1980s, when I was reading books like The Hacker’s Handbook and programming my dad’s clunky PC to simulate a Pentagon computer. It began a love/hate relationship with technology that continues to this day.

Steve Jobs was the inspiration behind my attempts at entrepreneurship, too. If it weren’t for Jobs, Branson, and a handful of others, I’d never have considered that business could be as revolutionary as art or rock and roll.

Most people saddened by the death of Jobs don’t think about business like that, of course. They simply buy the products and feel a kinship, in defiance of Douglas Coupland’s prescient warning that: “shopping is not creating”.

The genius of Jobs’ Apple was that he made consumption feel like creating.

Once only a small band of Apple aficionados felt this way when they used Apple products, but now half the world does.

Hence the adulation and grief people expressed at the passing of a fairly ruthless businessman whom they’ve never met, and maybe never even thought that much about.

The characteristics of entrepreneurs

One positive side to Steve Jobs’ death is that many more people will hear his inspirational messages. Perhaps a few will then go on to become entrepreneurs.

My favourite of his quotes comes from his now widely cited speech to graduating Stanford University students in 2005:

Remembering that I’ll be dead soon is the most important tool I’ve ever encountered to help me make the big choices in life. Because almost everything ­– all external expectations, all pride, all fear of embarrassment or failure – these things just fall away in the face of death, leaving only what is truly important.

Remembering that you are going to die is the best way I know to avoid the trap of thinking you have something to lose. You are already naked. There is no reason not to follow your heart.

Yet while many will be inspired to ‘go it alone’ by Jobs’ bold words and the driven way he lived his life, others may be less likely to try, because Jobs’ C.V. reinforces a narrow view of what an entrepreneur should be.

People who might be very credible in business could look at Jobs’ showmanship and his manic obsession with quality and secrecy and think: “Nah, that’s not for me”.

But that would be very wrong.

There’s no ‘one size fits all’ entrepreneur. Steve Jobs was no pile-them-high box shifter, Richard Branson is no mild millionaire next door, and Warren Buffett is definitely no gruff Duncan Bannatyne.

And that’s worth stressing because the popular media’s view that an entrepreneur must be a swash-buckling thrill-seeker or else a dedicated nerd puts off many people from considering starting a business.

I’m the first to stress the many reasons not to start a business. But thinking you’re missing out on some clichéd entrepreneur characteristics isn’t one of them!

Role your own mogul

We humans love to categorise, though, and we also like to have role models. It’s usually the same for those who start businesses.

True, a few entrepreneurs grow unthinkingly into the role from their everyday activities, while others become entrepreneurs because they just couldn’t work for someone else. They’re unemployable!

Yet even these ‘accidental tycoons’ usually cite success stories – if not outright role models – that they admire.

For this reason, I’d suggest that anyone thinking about starting a business gets reading. After digesting a few good biographies, you’ll appreciate there’s a wealth of different entrepreneur characteristics, and no billionaire can claim to have even half of them.

Here are ten good books – and ten very different entrepreneurs – to get you started:

Like anyone else, entrepreneurs have a huge variety of flaws too, but I think we’re all best concentrating on our strengths and finding people who can compensate for our weaknesses, rather than trying to do everything.

That said, you can flip most entrepreneur characteristics to reveal a potential failing – so risk-takers can be overconfident, numerical people too obsessed with detail or budgets, and so on.

Finally, I don’t think a ‘huge desire for money’ is the defining characteristic for most entrepreneurs.

Obviously it’ll be in the mix for many, but there are quicker and easier ways to make a bit of cash than starting a business if that’s your main goal.

Most people driven primarily by money will go into sales, property, or finance, depending on their aptitude, rather than risk having no money at all due to a failure in business.

And there’s no shame in that, as long as it’s true to their desires. As Jobs (and many before him) also said:

“Your time is limited, so don’t waste it living someone else’s life.”

Part Two will be a spotter’s guide to common types of entrepreneurs. Subscribe to make sure you read it!

This website uses cookies to improve your experience while you navigate through the website. Out of these, the cookies that are categorized as necessary are stored on your browser as they are essential for the working of basic functionalities of the website. We also use third-party cookies that help us analyze and understand how you use this website. These cookies will be stored in your browser only with your consent. You also have the option to opt-out of these cookies. But opting out of some of these cookies may affect your browsing experience.
Necessary Always Enabled

Any cookies that may not be particularly necessary for the website to function and is used specifically to collect user personal data via analytics, ads, other embedded contents are termed as non-necessary cookies. It is mandatory to procure user consent prior to running these cookies on your website.