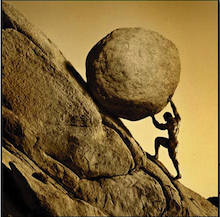 When I was a student, we called them McJobs. Undemanding gigs at a generic pizza place or in a bookstore where no one expected you to smile – not the customers, your employer, and certainly not yourself.

Everyone involved knew you were doing a McJob for the money – all £1.56 an hour of it – and as long as you didn’t vomit into a bin or miss three days in a row for Glastonbury, you’d hang on to it. If you didn’t, there’d be another McJob around the corner.

We’ll miss it when it’s gone.

It’s the competition, you see.

In the globalised, inter-connected, bullshit-fuelled modern world, it’s no longer possible for bright kids to take a multi-year breather, unless it’s for something officially sanctioned like a gap year (deemed improving, despite everyone knowing gap years are Club 18-30 for middle-class kids with a few National Geographic photo opportunities thrown to please Gran).

Due to the intense competition foisted by continual tests in school, ubiquitous A-grades, university for all, and the big influx of talented immigrants, you need to know exactly what you’re doing and where you’re going from the moment you rise from your potty to the day you follow your nose into a modern office.

Get the qualifications, gather the work experience, collect your badges and go, go, go – headfirst into a depressing facsimile of what you were led to believe would be your life.

And boy, you’d better be committed. Even if your job is merely to serve hot brown liquid to commuters at an 85% profit margin.

On track for partner by 40

Pity any poor teenager or twenty-something without a master plan.

While they’re busy wondering what it’s all about (life, I mean), some Hermione with half their imagination is already out of the starting gate, hell bent on achieving Grade 4, Level Six Employee-of-the-Month status in record time.

Far from aggrieved that she’s been turned into just another square peg, Hermione will be all foam and fury if she doesn’t feel adequately shepherded through her career by her employers as studiously as any kid tending his ant farm.

In today’s corporate world, the spiritless Hermiones have taken control, which is why long, gossipy lunches, Mad Men-style gender tension, and genuinely creative and inspiring work has all been outsourced to independent outfits who’ve not yet succumbed to pay scales and route maps.

Once named the rat race, for 95% of people the ordeal of the resultant 9-5(-10) is more like being a hamster running on a wheel.

The difference is nobody expects a hamster to be ‘committed, enthusiastic, and a genuine team player’ when he’s running on the spot to go nowhere.

If at this point you’re shaking your head, then either:

It’s excusable to be young, everyone should be so lucky as to get paid for doing what they love if they can, and becoming self-employed is the most realistic escape pod for most of us. (It’s what I did).

But there’s no excuse for believing what they told you.

I was happy to have a job once. Then I reached 30, and younger, fitter versions of me came along to be happy with it instead.

I’d noticed the wrong people got promoted. I saw that when I was promoted or offered new jobs, it was for the wrong reasons. I realised that sucking up was more important than competence.

What about the workers?

To appreciate how the modern workplace can crush the soul of anyone creative and bright faster than Simon Cowell saying, “Really? Who told you that?” then consider this interview with the boss of Whitbread, the owner of Costa Coffee:

Alan Parker, the chief executive who has been with the chain for 18 years, took a £5 million bonus this year for his work turning Whitbread into one Britain’s most successful companies.

Asked if it was time for his employees to share the rewards, the normally smooth Parker prevaricated. “We are looking at improving employee engagement at all levels,” he said. “We take employee morale very seriously.”

Did that mean pay rises? “Engagement has gone up,” he replied, before confirming the pay freeze was lifted.

Let’s repeat that again in slow motion and close-up, with Parker’s mouth opening and closing like a dreadful goldfish of the deep.

“Engagement has gone up,” he replied.

At this point I suppose I should discuss how the average worker just wants this and that, and how ‘engagement’ is a poor parody of the other.

But I can’t be bothered. Really, I’m feeling in a Bolshie mood, and that Karl Marx had a point.

If capitalism had a soul, then all the boring and awful jobs would be the best-paid jobs, and fun careers like playing football for Man United or running hedge funds or being George Clooney would pay the minimum wage.

Instead, capitalism has a sense of humour.

Doublespeak but no overtime

Parker has a good job because he’s in charge, he can make things happen inside his company, and because work excites him when he wakes up and never leaves his side.

Compare that to the average worker in a coffee shop. He or she will spend all day making coffee, be abused by customers, and even has to put up with patronizing garbage about ‘engagement’ – with only a piss poor level of hitherto frozen pay to compensate.

While the CEO is moving little plastic figurines depicting his various executives around his industry battle map, his employees are choking on their cappuccinos at the thought they’d come to work for anything other than a day’s pay.

A coffee chain CEO thinks his staff are facilitating a third space encounter for beverage-based mini-break client experiences or whatever waffle it uses to describe fleecing the drones as they make their way to their corporate slave ships, foolishly hoping a shot of caffeine might make another day of being dragged down by the Hermoines a smidgeon more bearable.

But his staff think they are selling coffee.

And they have to sell it like they love it! Like arriving to work in Unit 41B at 8am every morning is almost as good as being the fighter pilot, poet, brain surgeon, or lap dancer that they once imagined they’d become.

They have to love their little part of the big picture, even if it’s not a job anyone ever dreamed about except in one of those “Would you rather have syphilis or crabs?” type daydreams.

If they don’t pretend to love their dreary career convincingly enough, then sooner or later somebody else will come along who can.

Tune out, drop in

Ignoring for now the downsides, the revolution in art, culture, tolerance, and opportunity that happened in the 1960s occurred because bright people could drop out.

There were plenty of McJobs to clock into half-asleep while you were being a part-time hippy, and a clever person with a degree and fast tongue could sweet talk their way into a career in Bloomsbury or on Madison Avenue when they were done with peace and love.

A disappointing career in a dull office was never the be-all and end-all, but we knew it and admitted it back then.

In contrast, last week I met a top-flight Oxford graduate who has already done nine months of unpaid intern work – racking up huge debts living in London in doing so – and who insists she needs to do more.

She hasn’t had a job yet. I wonder how long she’ll feel engaged for when she does?

Readers, I suggest you consider these new realities of work, and start building a freedom fund pronto. Live cheap, and consider working with your hands or doing something else that keeps you from the Hermiones. And never leave a job you love, because there aren’t many left out there. What do you think?