Debating FIRE: The believer vs the sceptic vs the drop-out (Round 1) 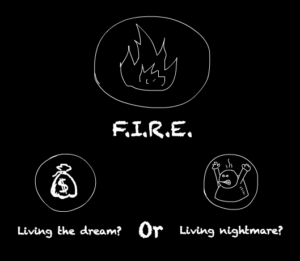 Welcome one and all to our finest seasonal tradition: the Monevator Christmas debate.

If you’re wondering why you’ve not experienced this wonderful institution before, it’s because we only hold it once every – ahem – six years!

But never mind that now… it’s time for us to make Christmas great again by painting ourselves with tribal colours and defending our positions to the death against people who are very similar to us, whose beliefs differ only marginally, which makes us want to destroy them all the more.

This year’s battleground is FIRE – the Financial Independence Retire Early movement, which shows the brave and willing how they can escape work years before the normies.

The debate will be a three-way:

Ground rules are few: no gouging, no biting, though biting sarcasm is allowed.

In short, we’re looking for a spirited debate in the best Monevator tradition.

We’d like to hear from Monevator’s readers, too. We know that many of you are on the FIRE journey, while others have made it already. Yet more shun it as the devil’s work.

Once we’ve finished our multi-post ding-dong we’ll open up the comments for a general free-for-all that’ll hopefully spill out into the virtual pub car park.

The Accumulator: I’ll start by characterising (or possibly mischaracterising) our respective positions on FIRE.

I’m hanging my hat on FIRE being a massive inflection point in my life. Kinda like the giant asteroid that wiped out the dinosaurs. I’m hurtling towards my date with destiny and I want my life afterwards to be very different from the days I spend now, fighting for survival in the corporate jungle.

I don’t expect FIRE to solve all my problems but, if I get it right, I do expect to be a lot happier in the new world.

TI, I think of you as a FIRE cynic. I think you’re down with the FI component but down on the RE. You may have even declared FI (kind of a soft launch) but you’ve also said you’ll work for the rest of your life. I understand why you might want to, but for me, the RE bit doesn’t mean you spend the rest of your life on the beach. You can still work but it should be intrinsically meaningful – the kind of work you’d do even if not paid. And that lies at the heart of my uncertainty about your position. Are you doing work you find meaningful? Is that even a goal for you? What is your endgame?

TDM, you’ve actually FIRE’d. You jacked in work. You explored other interests and blogged about your adventures. Then, one day, you ran back into the arms of The Man! From what I can tell, you didn’t find FIRE fulfilling and went back to the same kind of work you did when you had to earn a crust.

Why man, why? This is my nightmare scenario.

The Details Man: I think it’s important to separate out the Financial Independence and Retire Early parts of FIRE.

I feel that the ‘Financial Independence’ bit is about having the freedom to do what you want without a financial constraint. The ‘Retire Early’ bit is what follows for most people. Whether that’s escaping the physical toll of a manual labour job, or the lack of dignity in, and the soul-destroying nature of, much modern knowledge work.

For me, when I left my job several years ago, it was because I had been worn down by the ancillary aspects to what I did (valuing companies). Things like the annual appraisal, office politics, networking… I had the freedom to opt-out (at that point temporarily).

So I did, without much planning behind it.

Ultimately, I missed the ‘work’ bit of my job. It’s interesting, challenging, and rewarding. So I set about designing a way to try and keep the fun bits of my job and not the bits I didn’t like. Easier said than done, but at the moment I’m contracting part-time and it’s working.

The Investor comes out swinging

The Investor: I’d like to be permitted one strong opening statement: I really don’t claim to know what everyone should do, and I’m certainly not arguing against early retirement for anyone who really wants it.

What I take issue with is the implication – enshrined in the FIRE acronym – that everyone should want it or pursue it.

Financial Independence? Knock your heart out. I’d still caution against the blind pursuit at the expense of all else (I gave up perhaps more than I should have in the cause), but I see few downsides in achieving it. There’s no nobility in slavery, let alone poverty. Having the freedom to rewrite your script or just to turn your role into a walk-off part – if you need to – is almost priceless.

Financial independence for the win!

Early retirement is a different kettle of fish. For a start, I’d observe that few who can do it, actually do ‘retire’ early. We’ve abundant evidence from the blogosphere over the past few years that driven people who can achieve FIRE (a term I don’t like but will use here) seldom really retire.

I’m not coming at this from the ‘retirement police’ angle for the sake of it, but rather saying let’s call it what it is and learn from it.

If most of these financially independent, work-optional types create new businesses or entrepreneurial enterprises, or go back to work when they needn’t… well, they only have an awful lot in common with almost all the financially successful people I know – none of whom have hankered to quit work at 40, say. Let alone the evidence from the business world, of serial entrepreneurs and millionaires pursuing additional millions by way of new challenges.

It’s traditional in our realm to sneer at these people as hamsters on the hedonic treadmill but I’m not convinced. I think that better describes the financially un-free 40-something, wage slave.

I believe the people who could FIRE – and don’t – are telling us something about the nature of living a fulfilling, interesting, and socially comfortable life in 2019.

After all it has implications. If smart, successful people don’t FIRE, and if many of those who achieve FIRE don’t FIRE, then maybe it would be better if we didn’t spend so much time talking – and planning – towards FIRE?

To give just one example, if you know you’re not going to ‘retire’, then maybe you can spend a few years manoeuvring into having skills and connections that might make you perhaps a quarter of your current salary on a couple of days a week work.

Let’s say this is £10,000 a year for you. That’s perhaps £250,000 worth of capital that you don’t have to save, to achieve a more flexible and less work-heavy lifestyle, much sooner. Or maybe you hit your FIRE number anyway but you now have £10,000 a year above the FIRE plan. You learn to sail instead of playing with model sailboats. You can holiday in Bermuda instead of Blackpool. The list goes on.

Alternatively, maybe you kick your financial independence date further out a few years and try to shift into paid work that you don’t hate doing for those few extra years.

Again, our community has a lot to say about not wasting your life in work, but it seems recklessly happy to front-load a lot of certain and often unpleasant work – and years – to get there.

The Details Man: The ‘blind pursuit’ resonates. I don’t think that early retirement is a panacea. Generally speaking, pursuing a cause for a positive reason is far better than for a negative one.

For example, seeking FIRE to escape workplace miseries. You reach your FI number and escape. Those negative things go away. But soon enough they’ll be replaced with new ones.

I found this a few years after quitting. My railing against the corporate world was slowly replaced with annoyance at other things: delayed trains, people who walk too slowly, slow service in shops. You become grumpy very quickly. There’s a reason for the grumpy old man stereotype.

I realised you need, or at least I need, a little bit of challenge, and some things more under my control to get annoyed about.

Circling back, FI is beautifully simple: save more than you spend, invest it in a simple way and focus instead on what you want to achieve.

Is this the end for The Accumulator’s FIRE dream? Has he disappeared under the sheer weight of TDM’s and TI’s tag-team piledrivers?  Find out tomorrow in Round 2: the struggle for the soul of FIRE! Remember, comments are turned off until the final post.

Next post: Debating FIRE: the struggle for the soul of FIRE (Round 2)