I hope you all had a great Christmas and a suitably anti-climactic New Year. But there is something firmly transitional about that strange two weeks, isn’t there?

A friend sent me Private Eye’s video recap of 2019, and it already seems incredibly out-of-date. Jokes about Boris Johnson and Jennifer Arcuri? So last decade.

However a relic of 2019 that I’m not yet completely over yet (bar the ‘B’ word!) is the recent debate I had with the rest of the band about financial independence and early retirement.

Partly that’s because you guys have delivered some excellent follow-up comments to continue the conversation. (Link below!)

But it’s probably also because it’s been a while since I mentally visited some of the wider themes – living for today versus tomorrow, how to best spend 8am to 11pm, and on – and despite my rhetorical posturing for debate purposes, the pushback from The Accumulator gave me plenty to think about.

If you’re still kicking it over, too, then there are two relevant reads in The Guardian this week.

First off, Oliver Burkeman asks whether you’re living too much in the future at the expense of now. He has wider themes than just saving for retirement in mind, but it’s still a relevant read:

The problem with treating every year (or week, or hour) as something you’re supposed to put to use is that you end up living permanently focused on the future.

The more strenuously you try to get something out of life, the more emotionally invested you become in reaching the point at which you’ve succeeded in doing so – which is, necessarily, never now.

One of my arguments was that some FIRE-seekers seem too happy to slog through a bad existence now because they’ve pinned their hopes on a far-flung retired future. There are counterarguments in our debate so I won’t rehash it, but I will flag up this second interesting article on learning to love the job you have now:

There are simple steps we can take to start rebalancing this relationship with our workplace.

Researchers have found that even the most miserable job can be redeemed by taking back a little control.

That word ‘control’ is key. Several people in the comments to our five-part barny said they were all-in on early retirement because they don’t want to be told what to do.

I can fully understand that.

My own solution was long ago to become my own boss, and to work generally out-of-office. As I’ve written before, you don’t have to go nuclear on working for a living.

The one thing we all agreed on is that pursuing the financial independence part of FIRE is almost a no-brainer, whatever your future aspirations. And we plan to chip in over 2020 (and beyond…) with more articles and insights on Monevator as to how to best achieve it.

Debating FIRE: The believer vs the sceptic vs the drop-out (Round 1) – Monevator

The struggle for the soul of FIRE (Round 2) – Monevator

The elephant’s revenge (Round 3) – Monevator

The final conflagration (Round 5, including poll!) – Monevator

Also check out the excellent comment thread from readers – Monevator 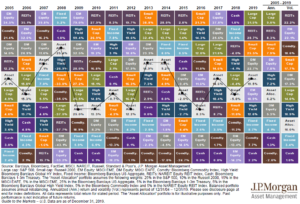 Making a will: 10 things you should know [Search result] – FT

Will savings rates continue to fall in 2020? – ThisIsMoney

The psychology of prediction – Morgan Housel

No asterisks – The Reformed Broker

Will UK house prices rise or fall this year? – BBC

Forecasting follies 2020 – Above the Market

Five lessons from ‘The Witch of Wall Street’ – Morningstar

I used to be silly with money, but with Hare Krishna I’ve learned self-control – Guardian

Negative interest rates aren’t such a departure, after all – Bloomberg

How tortoises can compete with hares – Morningstar

The Shock Doctrine: The Rise of Disaster Capitalism by Naomi Klein – £1.99 on Kindle

“My own experiences in the business world suggest that an ethical approach, far from being a potential barrier to profits, is actually the secret to success.”
– Julian Richer, The Ethical Capitalist

Next post: The Slow and Steady passive portfolio update: Q4 2019