Is the RBS Royal Bond a good buy? 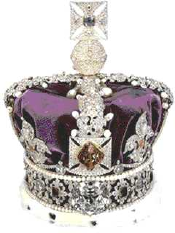 I noticed adverts for a 5.3% bond from the UK’s Royal Bank of Scotland in some old newspapers while catching up today.

After doing some research, I’ve established that the so-called ‘Royal Bond’ began trading at the start of September 2009, with a lifespan of six years.

The bond was priced at launch at £100, but it’s already been bid up in price, reducing the yield.

You’d also have to pay your usual broker’s fee, but there’s no stamp duty.

Is the Royal Bond good value?

By my rough calculation, the redemption yield on holding the bond to maturity (when it would be redeemed for its original value of £100 – i.e. for a small loss) would be something like 4.9%.

This yield is about 2.5% higher than five-year gilts, which seems fair compensation for the extra risks. It’s also a little higher than most comparable corporate bonds.

RBS is a troubled bank, but this tranche of debt should be very safe, and with the bank 80% owned by the Government it’s hard to imagine it could go bust to the extent that RBS53 bondholders wouldn’t be repaid.

It’s certainly much safer than the King of Shaves bond we looked at a few weeks ago, which was also directly aimed at private investors.

For the avoidance of doubt, however, you should appreciate your money is certainly at risk and you wouldn’t be entitled to FSA compensation.

Is the Royal Bond a good investment?

The bond may be good value, but personally I’m not very tempted.

There are fixed rate cash savings accounts offering 5% over five-years, with no risk to your capital.

You can exit most of them for an interest penalty if you really have to (and it’s unlikely to cost much more than the dealing spread on the RBS Royal Bond).

Of course, you also give up the chance of short-term capital gains if the Royal Bond continues to increase in price.

Also, if you want exposure to corporate bonds, then you should hold a nicely diversified range, or else buy them through a fund (painful, since costs of even 1% eat into your returns). You should probably not risk buying the Royal Bond alone.

Remember, I’m not a financial adviser. Do your own research and seek advice if you need it.