Updated by The Accumulator on September 7, 2016

Beer money, champagne taste is a criticism that can be leveled at a few acquaintances of mine – not least a good friend who lives in fine style for the present but reacts like Dracula to sunlight to the word “Pension”.

Recent jousting over our contrasting lifestyles (“You can’t take it with you!” comes his counter jibe) reminded me of research from the Prudential that reckons the average Brit will have earned a million pounds by age 46.1

That’s a great headline, but a million ain’t what it used to be.

According to the research, it would take a man (I’m one of those) 28 years to notch up his millionth pound earned (assuming he earned the average wage for his age, starting at 18).

After 28 years, a million would only be worth around £492,000,2 as inflation gets to work like woodworm on Pinocchio.

Of course, you’ll have to pay the bills along the way that will consume much of your million pound in earnings. Food, water, a roof over your head – even the most extreme frugalists can’t avoid spending a few pennies over the course of nearly three decades.

And then there are taxes.

Maybe I’ll put that Ferrari catalogue back on the shelf for now. 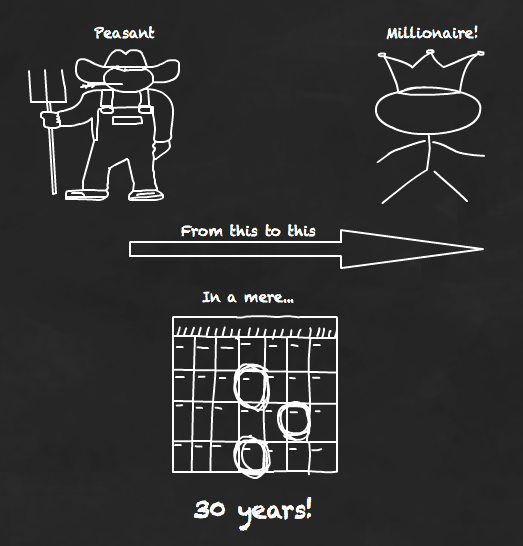 What does a million pounds buy these days?

The real question is what could I do with a million pounds if I had it now? There are plenty of answers to that, but essentially I’d like to live it up, draw an income, and never work again please.

The standard rule of thumb for living off your assets is that you can withdraw 4% a year without going bust.

My million pounds equates to a £40,000 annual income in that instance:

However retirement researcher Wade Pfau has smashed lumps out of the 4% rule with his data sledgehammer, so let’s use a more cautious 3% to keep us out of harm’s way.

The million pounds now delivers an income of £30,000 a year.

So if you can’t live on less than £30,000 a year then you’re gonna need to be a millionaire by the time you retire3.

How to save a million

All you need is the saving ethic of a Swedish tramp, an eye on inflation, the magic of compound interest, and a fair wind for your stock-heavy portfolio.

Well I say that, but although the average Brit may see a million pounds slip through their fingers by age 46, in reality it’s going to be an absolute b’stard for most to become a millionaire.

The key factors are:

If you’ve got nothing in the bank now and we assume a new normal growth rate of 5.5%4 for your portfolio, then you’d need to save around £28,000 per year for 20 years to hit the magic million.

You can use Dinky Town’s investment return calculator to run your own numbers – or check out Monevator’s millionaire calculator.

So just how much do we need to put away to earn a real million, given annual growth conditions of 5.5% nominal return and 2.5% inflation?

20 years to save a million

To earn the equivalent of a million pounds in today’s money, we need to invest nearly £46,000 a year for 20 years.

Impossible you say? It is for me. So let’s take a more leisurely 30-year route to Millionaire City.

30 years to save a million

Annual investments of just over £13,000 a year would balloon into a million after 30 years, given the same growth and inflation assumptions as above.

You’ll need over £2m to have the same spending power as a millionaire does now, which means you’d need to invest nearly £28,000 a year to make a real million after 30 years.

So let’s think more optimistically. Thirty years is a long time, who knows what might happen? What if growth was a more normal 7% for a 60:40 portfolio of equities and bonds over that time?

You’d still need to find almost £22,000 a year to achieve the £2m target that would make you the equivalent of a millionaire in today’s money.

My Ferrari catalogue is now burning on the fire because I can’t afford the central heating.

A country estate is something I’d hate

Millionaire status will stay beyond the reach of the average Brit for a long time to come, barring a dose of Weimar inflation. Little wonder just one in 65 of us had achieved millionaire status at the last count, and those mainly due to soaring property prices in the South East.

Even comfortable retirement status looks like a steep climb for many. You’re going to need a pot well into six figures as a minimum. Hitting seven figures, unless you’re rolling in it already, is going to be tough, but it can be done.

You’ve got to save hard, live on less, and work long. Who wants to be a millionaire, eh?

Perhaps I’ll re-read The Investor’s tips on how to live like a billionaire in the meantime.

Next post: Weekend reading: Another question for you guys