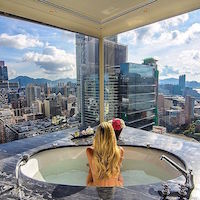 I once met a very rich man while walking along the cliff paths in Wales. I rounded the corner of one of those endless coves that regularly takes chunks out of the headland (and a bite out of your thighs) and there he was, sitting on a bench.

You might be surprised to hear this rich man was eating fish and chips.

He looked very happy with himself.

Content, I’d say, rather than self-satisfied. But perhaps with the glint in his eye of one who has seen some of life’s secrets and tasted a few of its finer things.

His wife was with him, too. Similar age – no trophy Version 3 here.

“Come on, we’ve left you space at the end,” the rich man said as I approached, and he shuffled along the bench a bit.

His wife handed me a portion of fish and chips.

“It doesn’t get any better than this,” the man said, looking out along the deserted path ahead and the darkening water, offset by one of those rarer-than-you’d-like British sunsets.

And I believed him.

Because if there was one thing my late father knew, it was how to be happy.

Yet even if he had been, I’m not sure you would have known it.

As I’ve mentioned before, my dad was a frugalist when the word “frugal” was the name of an obscure Muppet as far as most people were concerned.

Yet rather like my co-blogger The Accumulator, he didn’t seem to see his penny-pinching efforts as deprivation.

For one thing, he visibly got a kick from, say, finding a builder’s skip filled with what he called “perfectly good timber” (in reality something like discarded shipping pallets) and sneaking it away to make a rose trellis for my mother or a playhouse for my sisters.

But more important was how he enjoyed things.

I’ve eaten at some pretty fancy places around the world (cheers work!) and I don’t think I’ve ever seen anyone enjoy food more than my dad eating those Welsh al fresco fish and chips, or the aromatic but otherwise straightforward curry that he’d knock our socks off with on a Sunday night.

Enjoyed as much as him? Certainly.

But not more than.

If I were a rich man

The Norse leader in the series, Ragnar Lothbrok, gets some perks for being the top dog.

He has the biggest hut, and he gets to choose when his viking chums go set fire to other people’s huts – mainly the English.

Ragnar also wears the best furs. But otherwise from a material point of view, he’s not really living that differently from his fellows.

The vikings all eat in a big communal hall, drink the same brew, and see their children die from the same plague.

And as a price for his handful of material luxuries, Ragnar has far bigger concerns than the typical Jaako Sixpack, given that half of Scandinavia and, periodically, the English, are after his head.

It made me think about what we can enjoy today exactly like a billionaire would – like a Ragnar Lothbrok would in our world – rather than dwell on what we’re missing.

For instance, I’m sure traveling in a private jet is far preferable to Ryanair.

But if me or a billionaire fancies a salty snack along the way, our Kettle Chips taste just the same (and any billionaire who is routinely reaching for Beluga caviar at 30,000 feet has bigger problems than I do).

This is not to decry all material goodies, or to make light of income inequality just because we all breath the same air (though that’s true).

And it’s certainly not a reason not to save and invest.

Money does matter – but it also matters how you think about it, why you want it, and what you spend it on.

For example I’ve written before that young people should shop for clothes less and save more.

Young people are already so ridiculously better-looking than those of us with 20 more years on the clock. Why gild the lily at the expense of your pension?

And this principle of playing to our strengths – and enjoying what we have, or can enjoy for less – might also help keep you on track when capitalism has its Fagin eyes trained on your wallet.

One day I will write about my Live Like An Affluent Student Method ™ that served me pretty well in my 20s and 30s.

But for now, here are 20 things you can enjoy just as much as Warren Buffett, Bill Gates or The Queen.

Think of it as a motivational pick-me-up.

And a free one!

20 things you can enjoy as much as any billionaire

1. A can of Coke tastes no sweeter if you’re minted

You can’t buy better Coca-Cola, which is really the point of Coca-Cola.

2. Watching the Six Nations rugby in a friendly London pub

of Bach’s Partita for Violin Solo No.2 in D Minor (especially part V)

Music is a big one. Whatever you happen to like, for most of human history you needed to be rich and powerful to have someone play it to you on your whim. Now you can hear the best recordings ever made in milliseconds, more often than not for free.

4. The view from Westminster Bridge

If it was good enough for Wordsworth…

You don’t get to read a better version of a novel just because you’re rich. You read the same one as the rest of us. The rare obnoxiously rich know this, and it rankles with them – it’s why, for instance, US pharma bad boy Martin Shkreli bought the one and only copy of Wu-Tang Clan’s Once Upon A Time In Shaolin album, and why he tried to repeat the trick with Kanye’s latest.

6. Dance like a nutter to Pharrell Williams’ infectious Happy

Or Come On Eileen, if you prefer.

Kids don’t know or care that you’re rich. Or that you’re not. Not much in life is better than spending time playing with a little kid – until they get fed up and start crying, at which point you can return them to your sister. (Or is that just me?)

If you’re in a monogamous relationship, I’m not sure what to say. (Date night?) This is one of life’s conundrums, isn’t it. But it’s the same conundrum if you’re rich.

9. Go to a London School of Economics lecture

They’re free. I’ve seen everyone from Paul Krugman to Dani Rodrik speak there. The other week I said hello to the ex-deputy of the Bank of England, Charlie Bean. You don’t require an underground volcano lair to meet interesting people.

The marvel of our time is pretty much the same for all of us, once you’re on a half-decent connection. Whether or not you’re a billionaire, your experience of Yahoo.com is just as bad as mine.

Okay, I’m biased because I’m an investor in Taylor Street Baristas, but anyway I think theirs is one of the best of the big independents. I also believe great coffee is an affordable luxury that gets no better beyond around £3. And yes, I know, the latte factor and all that. I’m not saying drink pricey coffee three times a day. I’m saying one cup of decent specialty coffee won’t kill your bank balance, and to the point it’s as good as a cup that a billionaire can buy. (And I know, I’ve even tried the underwhelming Civet coffee – the expensive one brewed from cat poo that’s now gone unethical).

12. Fish and chips near the sea somewhere

Had to after my introductory waffle. For the authentic experience go to the fish and chip shop in St. Dogmael’s near Cardigan in Wales. But other outlets are available.

I have friends who hate walking. They get bored or tired. They look at their watch. They have to go home to drive to the gym. They are idiots I keep around to make myself feel better. Walking is one of life’s luxuries, and I’ll miss it when it’s gone.

Related: Hunting about a new world city on foot and getting your bearings is one of life’s great pleasures. Sure, if you’re a billionaire you’ll see a different Paris or Melbourne to me. Eventually I might wish I could pop to the opera on a whim or eat every Monday at the best restaurant (although of course I wouldn’t, because then it’s boring). Regardless, the best part of a new city is when it’s new and you turn around enough corners to find something beautiful you’ve never seen before.

Deliberately going up the cost scale for kicks here, to the annoyance of some readers. But really, life is too short to use those other phones. My iPhone is four-years old now, and it’s still like having an extra hand. Bill Gates can’t buy a better iPhone than me – and not only because he is condemned to use some Microsoft nonsense for corporate reasons. (This is a serious point. There’s a big difference between a crap car and a Tesla Model S – about £50,000 in the UK. But there’s not much in monthly terms between a bad phone and a brilliant one, and we’re talking about one of the most powerful devices ever made by man. Indeed Apple probably knows it’s leaving a lot of money on the table, which is I suspect why it tried to push all those blingy upscale iWatch

It’d be nice to have a private island. But it’s not hard to find a deserted beach in the Med, even somewhere like Ibiza at the height of summer. And the biggest joy of the sea is that first wave of warm water that’s higher than you think that knocks you back and makes you laugh like one of those happy three-year olds. Watching other people do it from your yacht is purely an optional extra.

I guess I am supposed to write “having fun with friends”. But it’s possible to have a lot of fun with strangers, even for an introvert like me. (I was recently dancing like a loon with some to Pharrell Williams’ Happy, for example). It’s much harder to enjoy a proper and honest disagreement that makes you both think afterwards with people you don’t know.

Okay, this one is a bit more from the Disney aisle. But seriously, it’s great when it happens and I refuse to believe it’s better if you do it in your penthouse – and quite possibly it’s worse!

You can buy a purer breed but you can’t buy a better dog. Same goes for cats.

Well, it’s all the rage now, isn’t it? But the whole point about emptying your mind of clutter to concentrate on being present is, well, the doing away with of clutter. The very rich might find it easier to make time, but I doubt it. Probably too busy instructing the staff over a poor phone line on how to clean the pool at the villa for the 68th time. Maybe I’m just jealous. Or just maybe I’m not?

Do you really enjoy something money can or can’t buy – but even if it can it doesn’t cost much? Please add your suggestions in the comments!

Next post: Weekend reading: Can we have too much of a good thing with indexing?