The real return on cash is going negative 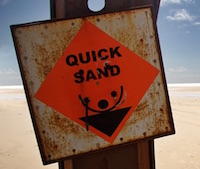 I don’t know if Bank of England governor Mark Carney is a Monevator reader (perhaps he’s the guy signed up as FoolsGold65) but whether or not he read my Brexit articles he seems to have reached a similar conclusion to me.

Some said I was a doom-monger when I suggested it was prudent to prepare for a probable recession in the face of the decision to leave the EU.

One Brexiteer told me to “Can it!”

But for his part Mark Carney hasn’t yet had enough of experts, which is just as well because he actually is one.

And he and his expert monetary policy committee have looked at deteriorating data such as the fastest drop on record in the PMI survey numbers, and they’ve seen enough.

They’ve just announced the biggest cut to the BOE’s economic growth forecasts since it began making projections in 1993. 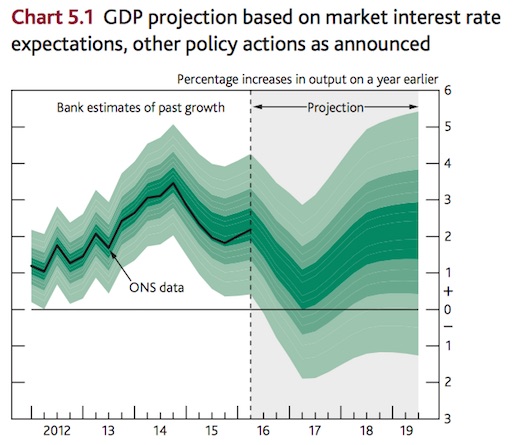 The darker the green line, the more confident the forecast.

Of course one reason the BOE thinks we might escape a recession – as indicated by the dark green line in this graph skirting above the 0% level – is because it has just implemented a bunch of measures to try to ward one off.

Carney to the rescue

In response to the plunge in business activity and the crunch in GDP projections, the Bank of England has:

These moves are no panacea. The Bank still projects unemployment will rise over the next 12 months, for example, and that GDP growth will plummet.

And personally, given the uncertainty – as well as the probable subliminal pressure on BOE forecasters not to assume a worst case scenario, which the BOE said in its press conference it had avoided – I would not be surprised if things turn out even worse than that.

But time will tell, and I certainly hope we do better.

What’s most striking for our purposes today though is the outlook for savers.

As most of you will know, the biggest visible impact of Brexit so far has been the fall in the pound versus other major currencies.

The pound had fallen by about 9% since the EU Referendum when Carney began making his announcements. It dropped another 1.5% afterwards.

For globally diversified UK investors, this six-week slide in Sterling has helped cushion any impact of the Brexit decision on our finances to-date.

In fact, as you will have noticed if you’ve peaked at your portfolio in the post-Brexit kerfuffle, most assets are up for UK investors.

Our Slow & Steady Passive Portfolio has bounded ahead, for instance.

One reason assets are up is because equities and bonds alike have risen as investors have correctly anticipated lower-for-longer interest rates will follow the shock of Brexit.

But our portfolios are also higher because our overseas holdings have risen in value as the pound has fallen, lifting their value in pound terms.

Note: We haven’t magicked real money out of nowhere like this.

The pound is down around 10% – and so we are actually 10% poorer than the Trumps, the Merkels, the Hollandes, and the Paul Hogans in the country next door as a consequence of Brexit.

That may or may not be a price worth paying, depending on your own views – but it IS a real price that we’ve paid.

Now cash savers are set to pay an even higher price.

We may not yet be in negative rates territory in terms of the official Bank Rate, what with it hanging on to 0.25% like a cinematic damsel in distress clinging on by her fingertips to a cliff edge.

But in real terms (that is inflation-adjusted) we’re headed down, down, down.

That’s puny, but CPI inflation is depressed at the moment also. It was just 0.5% in June, according to the Office for National Statistics ( ONS).

You can see just how low in a 10-year graph: 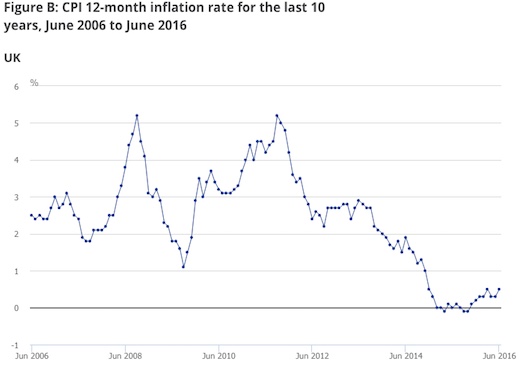 Why exactly inflation has been running so low – well below the BOE’s 2% target – is a subject for another long day.

But the relevant point here is that with CPI inflation at, say, 0.5%, even a wretched 1.6% savings bond is delivering a better-than 1% real return. Hence it is slowly making you wealthier.

However two things are now likely to happen.

Firstly, it’s likely savings rates of even 1.6% will soon be gone, because the Bank Rate cut will pull down yields across the money markets.

Soon you may only get say 1.5% or lower for locking your money away for a year.

The other thing that will likely happen is CPI inflation will rise. The weak pound that has so far been such a salvation for our perceived wealth will push up the cost of imports, and hence the prices we pay in the shops.

The BOE said as much today, and conceded its latest measures will make things worse. It sees too-high inflation as – probably rightly – the lesser of two evils.

The other option would be to take no action, and allow GDP growth to fall further than otherwise, for unemployment to head higher, and for us to perhaps be left with an even more precarious economic outlook in a year or two.

Whether or not you think such ‘economic cleansing’ would be valuable, it’s not in the BOE’s remit.

So CPI inflation is likely going up. A lot.

Here’s the bank of England’s latest forecast for inflation, taken from the August Inflation Report: 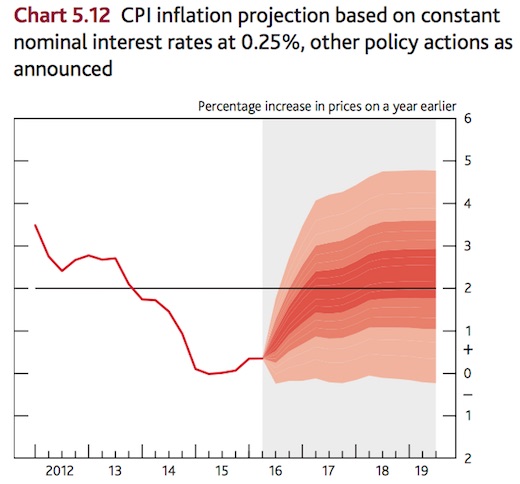 The darker the red line, the more likely the projected figure.

The BOE now projects that under the new 0.25% Bank Rate regime, CPI inflation will probably be running at 2% by early 2017, and that it could well be approaching 3%.

In terms of the BOE’s official mandate, 3% or more is no worse than inflation at or below 1% – but it does present a bigger headache for everyday savers.

Let’s assume – optimistically perhaps – that you can still get 1.5% on your locked-away cash in such a climate.

At 2% CPI inflation, a 1.5% interest rate is not good enough to deliver a real return.

Instead, your cash will be becoming less valuable every year, because:

And obviously if we were to see CPI inflation at 3% you’d be losing even more money in real terms.

I don’t believe the BOE mandarins are high five-ing each other at the prospect of pensioners getting poorer via a negative return on their cash savings.

True, the bank warned this kind of thing was likely if we voted to Brexit. And the pensioners voted for it anyway.

Which is fair enough – there’s more to life and the EU decision than money – but I will be pretty pee-d off when the inevitable sob story articles start to appear featuring income-starved Brexit-voting OAPs.

Own your decision, Brexiteers!

But while punishing savers isn’t the direct goal, making cash less desirable to hold in general is very much part of the rationale for the sort of QE operations the BOE extended today.

As a result of the likely move into negative real returns on cash, more cash savers will move into UK government bonds (gilts), more gilt owners will swap them for corporate bonds, some more will move into equities, and a sliver of risk-takers will use cheaper financing to start businesses or take out loans to build property.

And hopefully all that will help blunt the worst economic impacts of the decision to Brexit, by bolstering economic growth.

But make no mistake – by moving more of us out of super-safe cash and gilts and into riskier assets like peer-to-peer savings, corporate and retail bonds and equities, the stakes are being raised for everyone.

Previous post: Is it really worth trading in your index fund for a cheaper model?