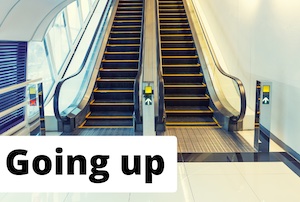 Another round of interest rate hikes from central banks. Another month that sees mortgage rates rise, too.

Which means a bigger monthly bill for anyone not on a fixed-rate mortgage – or whose deal expires.

Oh, and inflation is rocketing. It’s already above 9% and the Bank of England now foresees 11% by October.

All of which has gifted us a cost of living crisis.

Suddenly the pound in your pocket (or your fintech app) is like a heroine in a Jane Austen novel – pursued by suitors from all sides.

We haven’t had to think about rising interest rates or inflation like this for years.

Many people were shocked by energy prices soaring in 2022, for example.

Fair enough, that inflationary surge came out of the blue.

But there’s no excuse with your mortgage. We’ve been on notice that quantitative tightening was coming. Six months of interest rate and inflation speculation – as well as huge moves in the underlying bond markets, if you’ve paid attention – means we can’t say we weren’t warned.

The good news is UK mortgage rates are still low. At least compared to history.

However we have seen mortgage rates rise well off the Mariana Trench-like lows of last year.

Back then banks were practically giving away money like they used to hand out free piggy-banks.

Not anymore. According to broker L&C, the average two-year rate has trebled since October:

A big jump for sure. However it is comparing today’s rates with a freakish, short-lived low.

Looking at the last 20 years to the end of 2021 better puts the recent mortgage rate rise into perspective:

As you can see, today’s mortgage rate levels only takes us back to where we were in 2014. And rates have been far higher before then.

Given this headroom for still-higher rates and the pace of recent hikes, it’s not too late to stress test your mortgage. You want to find out how you’d cope if mortgage rates rise further.

For the rest of this article we’ll look at interest rate risk and your mortgage. Next week we’ll run through a checklist of other issues you might face with your borrowing.

Most people today are on fixed-rate mortgages. In my view this is a good thing, compared to when more people were on constantly-fluctuating variable rates.

Everyone used to do a lot of opining back then about whether it was a good time to take out a fixed-rate mortgage versus some other kind of product. They’d try to predict where interest rates were going.

But there’s no good reason for the average Joe to be speculating on the direction of rates like that. We have multi-billion pound markets that struggle to get it right. You’ll probably do better only by luck.

This lack of edge isn’t the reason to go fixed-rate, though.

In fact it actually makes the case for choosing a mortgage that tracks the variable rate, perhaps with nice discount applied. That’s because in theory the market has already digested everyone’s best guess of future interest rate moves. So it should all be in today’s prices/yields.

No, the real reason to fix your mortgage is for certainty and budgeting.

A fixed rate is like an insurance policy. It takes the risk of higher rates off the table for as long as your fixed-rate mortgage deal lasts.

This means that if you can make your payments now, then provided your income and outgoings at least stay constant, you know you’ll be able to do so in the future.

When you have a massive liability like a mortgage tied to something as precious as your own home, that’s very reassuring.

Alas, all deals come to an end. And when your current fix expires you’ll probably want a new fixed-rate deal, which is likely to be more expensive than the last one you took out.

So everyone will have to grapple with today’s rising rate environment.

And to belabour the obvious, these higher rates will mean higher monthly payments going out from your squeezed household budget.

Below are some examples of how monthly payments will ratchet up as mortgage rates rise. To illustrate I’ve assumed someone remortgaging with 20 years left to go:

From the table we can see the magnitude of changes coming in people’s mortgage payments.

Of course you’ll have to do your own sums with a calculator to get your figures.

For my part, if I remortgaged today I’d guess my new fixed rate would be about 3.3%, judging by my lender’s current published rates.

That compares to the just-under 2% rate I’ve paid for the past few years.

But with my interest-only mortgage it directly translates into monthly payments that are 65% higher.

The bright side of inflation

A 65% rise in monthly payments is ghastly from a sticker shock perspective, but I think I can take it. I also have a couple of years worth of payments set aside in cash as a back-up.

However if rates keep rising before I secure my next five-year term then it could start to get hairy.

(As with most fixed-rate deals, I would have to pay a small penalty in this final year of my term if I remortgage before it expires. I’d rather not!)

Higher rates stretch the case for staying invested versus repaying my debt, too.

How high would be too high? If the best five-year fix I could get was more than about double my current rate, I’d perhaps look to pay down the mortgage when my fixed term expires – or to take some other remedial action.

The decision is not a no-brainer because inflation is running even more rampant than interest rates.

And that means today’s very high inflation is eroding the real terms value of our mortgages at quite a clip.

In fact if you’re paying 3% interest on a mortgage when inflation is running at 9%, then you’re kind of getting a real return of 6% on your debt!

In practice there’s more to think about. If your salary isn’t outpacing inflation or house prices go into reverse, you may not feel so lucky. And the ‘real return’ from a negative mortgage rate applies at a real terms net worth level. It’s obviously not actively reducing your nominal mortgage balance.

Also – crucially – you must be able to make your mortgage payments to benefit.

Repossession during a huge economic downturn is to be avoided at all costs!

So can you afford the higher payments?

Of course, simply seeing how your monthly payments are going to jump as mortgage rates rise doesn’t do much but give you heartburn.

You now need to take this figure and assess how it affects your overall household budget.

One way to do this – suggested by The Escape Artist on Twitter – is to calculate your interest cover figure. This is similar to how companies indicate their borrowing level to investors.

For instance, if you bring home £3,300 post-tax and your mortgage is set to cost £1,000 a month, you have an interest cover of 3.3x. That shows you could pay your mortgage more than three times over from your income, ignoring the other demands on your money.

However as that innocuous ‘ignoring’ suggests, I’m not sure how useful this figure will be for most.

You can perhaps compare your new coverage level to your current one to get a sense of how much more stretched you’ll be with higher payments.

But really, for individuals who occasionally take out a two-to-five-year fixed rate mortgage, it’s better to think in absolute terms rather than comparative ratios.

I’d simply plug your predicted higher monthly mortgage payments into your monthly budget if you have one – or into your best guess if you don’t.

The answer to these questions could warn you it’s time to tighten your belt.

If you want to get fancy, you could even model out the life of the mortgage term and inflate up your other spending to try to forecast a few years ahead.

If you do this, don’t forget that – hopefully – your take home pay should be increasing, too.

The outlook for rates (and inflation, and the economy) is very uncertain.

The market seems to think rates and inflation will more or less settle down within the next couple of years. And that ultimately the wailing “awooga!” sirens will turn out to have been a temporary notice to take cover. As opposed to warning of a long-lasting stagflationary apocalypse.

However we’ve never before come off 5,000-year lows for interest rates. Let alone after a global pandemic. Never mind while a war rages in Europe.

So could we see interest rates head higher than expected? Mortgage rates of 6%? Or 8%?

It’s possible. But I do find it hard to envisage.

If mortgage rates rise much above 6% or so, many people could struggle. We might then see a wave of defaults, forced sales, a house price crash, and a vicious downward spiral.

At the same time the government would also face huge rises in the cost of repaying the national debt. Perhaps taxes would rise.

It all sounds deflationary – and likely to cause the Bank of England to cut rates.

That’s not to say it couldn’t happen. And I’m definitely not making a moral case for bailing out homeowners.

I just think it’s likelier that the Bank of England – and the UK Treasury – would lean towards accepting higher inflation versus triggering economic meltdown.

Indeed given the UK is carrying more than £2 trillion in national debt, many politicians might see chronic debt-eroding inflation as something of a happy outcome.

We are (probably) gonna make it

There are cataclysmic views out there as to how this all ends, but I’d keep some balance.

For instance since 2014, the Bank of England has mandated new borrower’s should face a stress test to see if they can still afford their mortgages if Bank Rate rises by 3% over a five-year period.

That’s one reason I believe we’ll escape a total meltdown as long as mortgage rates stay below 6%.

But who knows? All sorts of costs are rocketing and piling on the pressure, and there’s not much you or I can do about the big picture anyway.

Our challenge is navigate these choppy waters while preserving our future financial security.

How we save and invest is a big part of that, as is staying in the game as mortgage rate rise. So get stress-testing – and start to take some budgetary evasive action if you have to.

Next time I’ll go into more detail about my own stress test. Subscribe to ensure you get it.