Quantitative tightening and you 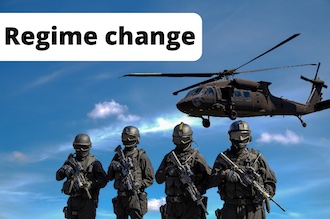 What is quantitative tightening? Why are bond funds falling? Should you alter your portfolio before the Bank of England further raises rates and soaring inflation sends you to the soup kitchen?

All good questions that we’re hearing from Monevator readers every day.

So let’s have a primer on what’s going on with central banks, rates, inflation, and the market.

With most things in investing, every answer leads to two more questions.

Such exponential growth is great for compounding your wealth. But it’s bad for your patience and my fingertips.

So rather than go down every rabbit hole, I’ll include plenty of links to other articles.1

And we’ll put off considering what (if any) action you should take until next week.

When we’re done you still won’t like it if your portfolio falls when a central banker opens their mouth. But at least you’ll know why you’re down!

Note: there will be much talk of the US. That’s because as the engine of global markets, changes in US monetary policy typically affect everything.

What is quantitative tightening?

Quantitative tightening (QT) is a contractionary monetary policy. It’s the opposite of quantitative easing (QE).

Okay but (a) what the flipping Henry is a ‘contractionary monetary policy’? And (b) as many of us never really understood QE, reversing it doesn’t simplify much.

So, briefly, QE involves experiments operations by central banks to lower interest rates. They do this to support economic growth and soothe stress in the financial system. The bankers’ aim is to hit their inflation target and any other policy goals.

Traditionally central banks exerted their influence by changing the base interest rate that commercial banks are charged for holding money with them.

However in the ruinous crater-strewn landscape that followed the financial crisis, central banks went unconventional.

The bankers wanted to support asset prices, tempt money into riskier securities, and encourage economic growth to ward off deflation. They’d try to do this by keeping market rates lower than they otherwise would be.

The net result was higher prices for safer assets and lower yields across the spectrum.

For example, the graphic below shows the decline in the all-important ten-year bond yield in the heyday of pre-pandemic QE.

Most economists (though not all) would agree this descent was at least partly due to QE:

Other mooted impacts of QE – such as egging on reckless speculation or juicing the money supply – are more hotly debated.

For instance the Bank of England found no evidence QE boosted lending in the real economy. (Although some might say: “it would say that wouldn’t it.”)

The consequences of quantitative tightening

Quantitative tightening should be the opposite of QE. Central banks will wind down their purchases of assets (and eventually maybe sell them). They will also raise their base rate.

This should reduce demand for assets like government bonds compared to cash and short-term paper, and hence increase yields as bonds are sold off. (When bond prices fall, yields rise).

You’d expect this to happen until bond yields reach a level that tempts enough buyers back into them.

And indeed this dance has already happened. Without the US Federal Reserve yet raising interest rates or halting asset purchases, yields have been shifting across the curve in anticipation:

Expectations are everything in financial markets. Yields have risen as traders try to anticipate where rates and inflation will be in one or two years from now and beyond. It’s happened in all major markets.

That is why your bond funds are down.

Markets now expect slightly more than half-a-dozen US rate rises in this cycle, starting in March.

Why do quantitative tightening?

Okay, but if QE made money cheap and it supported economic growth, why stop? Who doesn’t like free money and a booming economy?

Well, central bankers for a start. History suggests too much of a good thing can cause the economy to overheat.

At best that could stoke even higher inflation, which would then have to be choked off with more rate rises – and perhaps a deeper recession – compared to if central bankers had acted earlier

At worst too much cheap money could lead to dumb investment decisions, credit bubbles, and another financial crisis.

(Actually, history again reminds us of worse still. Folks who end up moving their near-worthless savings around in wheelbarrows get politically uppity. Think gunshots in the streets uppity.)

Central bankers would therefore like to return conditions to normal in their noble pursuit of price stability. (And to avoid a revolution).

Once conditions are ‘normalized’, they can go back to simply raising base rates – and their eyebrows – to influence the economy.

(They’d also probably like to get back some of their firepower so they have more ammunition to respond in the next crisis.)

Some doubt complete normalization is achievable anytime soon, due to the sheer scale of QE. But it’s the aspiration.

However there’s an even bigger reason to start quantitative tightening ASAP – which is that inflation is missing its target by about the same margin as I missed out on playing for Man United.

Inflation is running at 6-8% in the US and Europe. And unemployment is very low.

It’s hard to justify rock-bottom rates when inflation is going through the roof.

Quantitative tightening and your bond funds

With all this going on, it’s clear why the mere talk of quantitative tightening has roiled markets – and your portfolio.

Higher rates across the yield curve come about from falling bond prices, as investors reshuffle their holdings according to their expectations for central bank interest rate hikes and any reversal of asset purchases, as well as their forecasts for inflation.

Short-dated US Treasuries have seen their yields rise faster than long-dated bonds. Short-dated bonds compete with cash in the bank, where traders are very sure interest rates will soon be much higher.

In addition, traders might be betting that the more central banks tighten now, the greater the long-term impact on market interest rates and inflation.

Hence expectations for more rate rises – and sooner – that have emerged in 2022 (driven by higher than expected inflation and arguably lower unemployment) may imply a need for fewer rate rises further out.

This is all a balancing act for central bankers. If they go too heavy too soon with quantitative tightening, they could cause a recession.

Expectations of a recession may be signaled by the yield curve inverting – a situation where long-dated bonds yield less than short-dated ones. (Unusual, due to the additional term premium that’s normally demanded by investors in longer-term bonds).

The curve is already flattening, as short-term yields have risen by more than long-term yields:

We may well discover a recession is an inevitable price to pay for the easy money conditions (and asset price rises) of the past decade.

We can expect quantitative tightening to depress valuations for pretty much all asset classes.

However some investments (such as miners and energy shares right now) may enjoy an off-setting boost, as high inflation makes their near-term high earnings more attractive.

With a lot of fits, starts, bumps, and reversals, the same repricing and reshuffling shenanigans we’re seeing in bonds will therefore play out across the risk/reward spectrum of all assets.

Investors are now re-evaluating equities, property, and even the likes of gold.

As I noted, companies’ shares are mostly valued on their future earnings power – discounted by expectations for interest rates and inflation.

The more that a company’s earnings will come in the far future, the more higher yields and inflation expectations will impact – in theory – its present value.

When interest rates are at zero and inflation is low, the value put on future earnings can be very high indeed. Cash is trash (in that it earns you nothing) and low inflation expectations means distant earnings will still be very attractive in terms of today’s money.

All that changes with quantitative tightening and with higher inflation, however.

Investors aren’t willing to pay so much for a company that won’t be profitable until 2030 if they think that by then the spending power of cash will have fallen 25% in real terms and they might have earned 3% a year in the bank on the way.

Hence the ‘multiple’ investors put on the company’s earnings will go down.

Played out across all companies, this re-rating can cause a market decline.

The ups and downs of go-go stocks

In practice so-called growth shares have been hit much more than value shares.

Investors had slapped very high multiples on growth companies’ future earnings – and then ratcheted them even higher on the back of temporary stay-at-home economics. They’ve now reined that in.

Of course shares represent businesses, and their individual fortunes will depend mostly on the success of their operations.

But tightening monetary conditions can have a direct impact here, too.

For example, banks may reduce lending, making it harder to (re)finance and to borrow to grow.

Or consumers may decide to save more and so reduce their spending, hurting sales.

A big shift in the outlook for rates and inflation ultimately changes the relative attractiveness of all assets.

Investors now even view something like gold – which has no earnings – differently.

When your cash earns you nothing in the bank, why not own gold?

Conversely when cash is paying say 2%, why pay to hold gold that earns nothing?

Remember: a goal of QE was to push money to accept riskier returns.

All things being equal, we can therefore expect quantitative tightening to do the opposite. Investors will retrench. More investors will eventually see attractive returns available again from bonds, thanks to higher yields following price declines. Some money that shifted into shares in a desperate hunt for yield will go back to fixed income.

This is all why – besides their eternal effort to sound sexier than accountants – City types call the shift to quantitative tightening a regime change.

Thankfully the CIA need topple no banana republics to get us to this new financial world order.

But if the 40-year decline in interest rates really is over, we can still expect some fireworks.

The turning of the screw

We now know what quantitative tightening is, and why it’s happening.

But to return to where we started, what does it mean for your portfolio?

Well, it sure looks like a recipe for more volatility, lower stock markets than otherwise, and – gasp – falling bond prices.

But before you sell everything and cower in a cash savings account (where you’ll be losing 6% a year in real terms) I have a menagerie of caveats.

We’ll get into those next week.

Next post: What is the cause of high inflation?