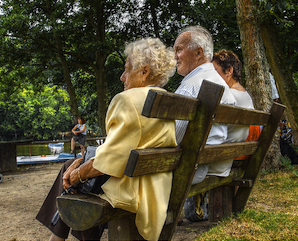 Every day you live, your life expectancy increases by six hours.

The statistic comes courtesy of Duke University, who got it from playing around with life expectancy data from the past 170 years.

According to the demographer behind it, Professor James Vaupel:

“If young people realize they might live past 100 and be in good shape to 90 or 95, it might make more sense to mix education, work and child-rearing across more years of life instead of devoting the first two decades exclusively to education, the next three or four decades to career and parenting, and the last four solely to leisure.”

Vaupel also contributed to a study published in The Lancet in late 2009 that found that on current trends, most babies born after the year 2000 in the developed world would see their 100th birthday!

All great news for little Jimmy, but what does it mean for us as investors?

It’s one thing to eat well to get to old age with most of your teeth and a liver that’s fit for purpose. But what will you do for money?

I think most people radically underestimate the lifespan that – touch wood – lies ahead of them.

I’m the gloomiest person I know. I pretty much assume the environment will be trashed, and that the male genes on my father’s side doom my own old age (though both he and his father had appalling diets, and women in the generation ahead of both my parents routinely made it into their late 80s).

This is on top of assuming it will rain on bank holidays, that new films will be rubbish, and that I won’t win the lottery.

Yet despite my intrinsic pessimism, I always instinctively think long-term.

Thinking long-term isn’t always the easy option. It would have been more fun to spend more money on more holidays in my 20s, instead of saving quite so much.

I also think I’ve hurt some people in my life, particularly women, by not being in a rush to ‘settle down’.

The thing is, marrying one person for life already seems a stretch these days. Doing so at 25 when you might live until 100? That seems – um – imprudent. If lifespan has doubled in the past 200 years, then surely our life expectations should change, too?

But few people think like this, in my experience. If the proverbial bus was actually hitting people at the rate implied by the vast ‘tomorrow may never come’ brigade I meet, then you wouldn’t be able to cross the road for flying bodies and blood-soaked public transport.

Of course, balance is the key – you don’t want to be a tightwad or to meet Miss or Master Right at 60.

But equally, life is long for most of us. So live like that.

Age ain’t nothing but a number

The reason we have a ‘pensions crisis’ as opposed to a ‘pensioner bonanza’ is because our existing system is essentially a Ponzi-scheme, built on the maths of an expanding workforce and an initial small population of old folk who didn’t have the temerity to hang around too long.

This crisis has been done to death in the media recently, not least with the official retirement age going up to 67 by 2020 and the Government mooting a universal State pension of £140.

Instead, let’s think about asset allocation and what our lengthening lives means for the retirement investing of the self-reliant types who I presume read Monevator.

There are really two main asset classes – equities and bonds (well, and cash, but that’s not a good long term investment). Everything else is a diversifier or a deviation of these two main classes, which boil down to volatile growth assets versus slow but steady fixed income assets.

Now, conventional wisdom is that you should vary your exposure to these key assets according to your age, where:

But does this ratio still make sense in a world of pre-schoolers innocently toddling towards the 22nd Century? There’s obviously no definitive answer, but here’s a few things to think about:

Inflation is your enemy

This is the big one. People retiring on fixed annuities at 60 could live to see their incomes ravaged as badly by inflation as arthritis does in their joints.

Inflation at just 3% will halve the purchasing power of your money in roughly 23 years. This might not be so bad if you’re a single man, particularly as some spending (though not care costs!) will fall as you age. But if you’re a 60-year old man with a 55-year old wife, she could really suffer when she outlives you by two decades.

All things being equal, you’d prefer to be in equities than cash or bonds. I am NOT saying you should have an unbalanced portfolio, or invest in a way you’re not comfortable with. But whether you want to pay for health care at 80 or leave more to your grandkids at 90, you’ll likely have more to play with if you take on more risk – i.e. hold more equities for longer – en route.

People are mostly concerned with having an income in their old age. The good news is dividend income from equities is much more stable than their fluctuating capital values. Over the past ten years, the share prices of a basket of leading UK equity income investment trusts would have been all over the place, but the income they delivered would have increased every year.

Equity risk is related to time in the market, not your age

If you’re 50, you’re statistically likely to live for at least 35 years, and maybe much longer. That’s enough time to ride the ups and downs of stock market volatility. Don’t bet the farm, but equally don’t automatically assume you can’t hold any shares once you’re 65. You could have decades more of investing ahead of you.

More equities may mean you can save less

I’m not suggesting you should save less, if you can afford to save more. But if you’re 57, money is tight, and you’re thinking of shuffling your money into bonds ahead of retirement at 67, perhaps you should pause. In the worst case you may be able to work a couple of extra years or eat baked beans should equities slump. On the other hand, you’ve ten years to go – and over most ten-year periods, equities will beat bonds, doing the heavy lifting for you.

The number one priority is not to run out of money before you die. You can adjust by saving more or spending less – or by adjusting your exposure to riskier assets.

Not so shy and retiring

Finally, people are much healthier at 65 (or 67!) than they once were, and medical advances continue. At the same time, younger people in their 20s and 30s have grown up assuming they’ll have multiple jobs, and perhaps even multiple careers. Also, the ageing population means as older workers they will have less competition from young hotties.

As a result of all these factors, I think the idea of doing at least some work in your old age will seem entirely normal by 2030. That matters, because you can afford a riskier asset allocation if you’ve still got money coming in from elsewhere.

Given amazing statistics such as half of today’s kids living to 100, it’s almost impossible to believe that the French are striking because their retirement age is rising from 60 to 62.

They make us Brits with our crazy house prices and credit card addictions seem like hardheaded realists.

Yet in reality, we’re just as nutty. For the best part of a decade, the Government has compelled pension companies to hold more bonds and fewer equities, even as longevity has moved ever further ahead.

For a variety of reasons (two bear markets in a decade, the boom in liability driven investing and so on) pension funds and other institutional investors have slashed their weightings of equities and bulked up in bonds in the past quarter of a century.

But here’s the rub; these pension funds somehow have to deliver a return on assets of 6-8 per cent and it is stating the obvious to say that it will be challenging for government bonds, which offer a real yield of less than 2 per cent, to deliver that.

The numbers are stark: The percentage that pension funds allocated to all equities has slumped from 80% in 1992 to less than 50% in 2010. They’re buying bonds, despite a multi-decade time horizon and in the face of a probable government bond bubble.

This is crazy — pensions are surely the ultimate long-term investment for most people, and most people are living longer. I’d call it the next miss-selling scandal, except I can’t see Her Majesty’s Government investigating itself.

Of course, if you’re an economic doomster type, all this talk of getting older and richer is academic. Equities will be made worthless by the coming collapse of civilization. Better gather ye rosebuds while ye may – before the Chinese buy them all, or acid rain gets them.

The rest of us need to stretch our thinking a couple of decades further. Being old by all accounts has some severe drawbacks, but being old and poor compounds them.

Who knows, maybe you’ll end up a rich old super-investor!

And what if you’re one of the unlucky ones who gets hit by a bus, and so saved and invested for nothing? Ah well, no hard feelings. Money doesn’t buy happiness, anyway.

Next post: Weekend reading: House price boom is more a whimper in the long run