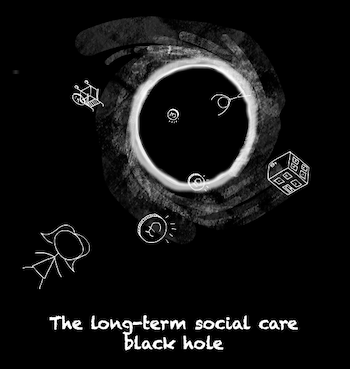 A big blank on the personal finance map is paying for long-term social care. By that I mean how we’ll fund care for ourselves and loved ones if we need support to cope with serious physical and mental deterioration in later life.

Yeah, that last one was my approach.

I stuck my worries in a box labelled: Too complicated. Too scary. Too far away.

Then I buried it in the psychological sand.

It could be you

Avoidance is not a strategy, however – especially in the UK.

Increasing need, rising costs, squeezed budgets, and political prevarication means that in Britain the expense of long-term social care falls disproportionately on those unlucky individuals who require the most help.

The answers are out there. And now that I’ve looked inside the box, I think long-term social care can and should be planned for.

At the very least, it seems less scary than when it lurked like a death star on the fringes of my mental and financial map.

Strap in for a bumpy ride

The UK’s patchwork of social care funding options makes for a big topic.

In this post, I’ll explain why you’re likely to pick up the bulk of the tab – regardless of those headline-grabbing social care caps.

The social care funding thresholds help illustrate why you’ll probably pay for some or all of your care:

Your financial assets are means-tested when you seek local authority support1 for your care.

If your assets are valued:

Above the upper threshold – You pay for your care. You’re a self-funder in the jargon. At least until your assets are so depleted that you fall under the threshold.

Separately you may be entitled to limited support via the NHS. But don’t count on it.

Between the thresholds – You’re eligible for some local authority financial help but also need to contribute from your own assets and income. I’ll deal with the impact of that formula later in the series.

(Between the thresholds doesn’t apply in Wales.)

Below the lower threshold – You qualify for more funding but it’s not unconditional. You’re still liable to pay from your income (which includes benefits and the State Pension) above yet another minimum threshold.

Which brings me to the salient point about social care funding.

Nothing is as it seems.

A maze, hidden in a labyrinth, inside a jungle

Navigating the social care system is like dealing with a second tax code.

Even terms like ‘personal care’ in the table above refer to a defined set of services that don’t encompass everything you may need.

You also have to be assessed as needing specific types of care to stand a chance of receiving a service for free. That’s trickier than it sounds.

Whether your home falls into the means-tested mix depends on other conditions. We’ll explore those later in the series.

The thresholds also have a habit of not moving with inflation. The upper threshold for England hasn’t shifted since 2010/11.

Meanwhile, the real (after-inflation) cost of care in the home has risen by 10.6% since 2015/16 and care home places by 12% over the same period, according to healthcare charity The King’s Fund.

The anti-bonus ball in all this is a postcode lottery effect. This sees outcomes vary widely by local authority and region.

Personal funding shortfalls in England can be exacerbated by the North / South divide, for example.

Local authorities in the North tend to pay lower rates for services than those in the South.

Moved south to be closer to family after entering the system? That could make it more difficult to cover social care expenses.

Multiply all this complexity by different systems in each of the home nations and you have a throbbing headache.

No wonder most of us hope the problem just goes away.

The next section illustrates why the new social care cap in England is no wave of a magic wand. While less relevant to readers living in the other home nations, it does reveal some of the traps to be wary of throughout the UK.

The social care cap – why it doesn’t fix the problem

The centrepiece is an £86,000 lifetime cap on social care costs.

Once your spending hits the cap, the local authority is meant to take over paying for your care. This is a universal benefit. No means-testing required.

But the devil is in the detail and he’s up to no-good.

In reality there’s a range of care expenditures that don’t count towards your cap.

Your spending can shoot far beyond £86,000, yet your metered tally shows you falling short. This forces you to keep spending because you haven’t ‘officially’ reached the cap.

Even if you do hit the cap, the expenditure exclusions can leave with you bills to pay after your local authority steps in.

The impression that your social care expenditure is capped at £86,000 is ‘technically’ the case in the same sense that attending office parties during a pandemic is ‘technically within guidelines’ – if you ignore the real world.

Let’s walk through the main loopholes. (Because they’re that big.)

Firstly, £10,400 per year of care home fees don’t count towards the social care cap. The idea is that an individual remains responsible for their food, board, and utility bills, before and after they’ve hit the cap.

DLCs put a flat rate figure of £200 per week on this responsibility.

Imagine you need to go into a care home. It costs you £700 per week because you don’t qualify for financial support i.e. you’re a self-funder.

But the same care, in the same home, costs your local authority £500 per week – because they negotiate a better deal for residents they’re obligated to support.

Guess which figure counts towards your social care cap?

Did you guess the lower £500 per week – despite the fact the care you’re getting actually costs you 40% more?

Oh, you complete and utter cynic.

But you’re not quite cynical enough! Because you must also deduct the £200 per week from those DLCs.

In this example, only £300 per week counts towards your cap. Your total spending won’t reach the cap for five and a half years.

Care home fees paid by self-funders are 41% higher, on average, than costs paid by local authorities for places in the same care homes. That’s according to figures quoted by The King’s Fund.

Qualify for any State support before you hit the social care cap? That money doesn’t contribute towards your £86,000 total, either.

Only money that you contribute from your own pocket counts. Minus the premium you pay as a self-funder. Minus payments for services your local authority deems unnecessary.

Only spending on your eligible care needs counts towards your social care cap.

Only eligible needs will be funded by your local authority once you hit your cap.

Your eligible needs are determined by a care needs assessment. And who runs that? Local authorities.

These are the same local authorities that suffered a 55% cut in government funding between 2010/11 and 2019/20, according to The Kings Fund.

The BBC reports that half of requests for help are turned down.

Budget pressures are one reason why your local authority may think you need less care than you do.

Pay as you go

As a self-funder you can of course pay for all the care you can afford.

After you hit the cap, you can keep paying for care beyond your eligible needs using top-ups. If you have the money.

The bigger the gap between your needs and what’s deemed eligible, the more you’ll pay out-of-pocket.

For example, you may want to pay for additional care services in your home. Or perhaps for more hours of help with cooking meals than your local authority deems necessary.

In a care home, you may want a bigger room with more facilities than the council will stump up for. You may also be charged for extras – anything not covered by your official resident’s care plan.

You may start self-funding a care home place but become eligible for support later. That can leave a funding gap if your local authority will only pay for a cheaper home but you want to stay put.

Or you may wish to move closer to loved ones – who live in a more expensive part of the country – after your needs were assessed in a cheaper region. You’d have to pay the difference if the council refuses to increase your funding.

There are still more exemptions, but you get the point.

The reality is you can rack up large social care bills that don’t trigger the cap.

Even if you do qualify for financial support, there can be a gulf between what you need and what the State will pay for.

And I haven’t even covered the inequities of the social care formula that penalise homeowners in areas with low property prices.

This Is Money has an excellent piece on that. It includes a damning verdict from Andrew Dilnot, who chaired an independent commission on social care from 2010 to 2011.

The bottom line is that if your house is your only spare asset, then selling it to fund long-term social care remains a live threat.

The good news is that there’s little chance you or a significant other will end up homeless. There are plenty of deferred payment and equity release options available. We’ll look at those in a later post.

But in part two of the series, I’ll cover how your assets are assessed in the social care means test.

Next post: Weekend reading: In a M.A.D. world all correlations go to one

Previous post: Weekend reading: What if work became less of a burden?