Why your pension won’t be plundered 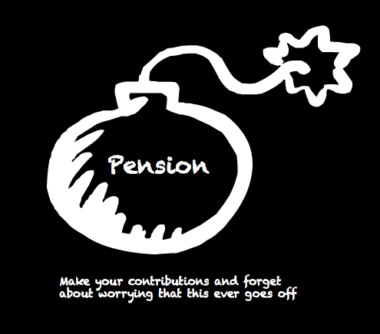 There’s a school of thought out there that the pension is an endangered species. As doomed as an orangutan surrounded by palm oil company bulldozers and men with matches.

These arguments are variants on the theme of:

The Government is out to get you. It’s run by a clique of vampires siphoning away our wealth into offshore tax havens. Democracy is about as real as a shadow puppet show, everything’s getting worse because, well, I’m afraid of getting older and cynicism is a really hot look.

Cards on the table: I’m against reflexive pessimism like this because it paralyses us. It feeds into a climate of distrust that undermines our faith in vital social institutions.

With regards to pensions specifically, this kind of thinking is anti-vaxx for personal finance. Bad ideas spread like superstition during a medieval plague. Those seeking guidance are misled by those who should know better. In our eagerness not to make a mistake or be played as the patsy, we can end up falling prey to both.

Our pension system is beholden to the political, social, and economic realities that face our country. Let’s weigh those up and see what we can deduce about the future of pensions.

The balance of power

Governments don’t stay in power by shafting those who vote for them. That may seem controversial given the Carry On Politics level of buffoonery unspooling in Westminster, but it’s true all the same.

Governments stay in power by racking up achievement points with their supporters, neglecting those they cannot court, winning the spin wars, avoiding catastrophe, appearing more credible than the opposition, and kicking the really toxic cans down the road.

Your pension is protected by that political nutshell.

Britain is ageing: 18% of the population is over-65 now and 27% of us are predicted to be over-65 by 2041. Future governments oppose the core interests of those voters at their peril. Especially when that group is pretty spry around a polling station – in 2015 10.6 million baby boomers voted, heavily outgunning the 6.4 million millennials who turned up.

It’s no coincidence that the Tories increased pension and health spending even in the midst of austerity while cutting welfare and school budgets. They knew the grey vote was and is a critical part of their base and tailored their policies to keep them onside.

And what politician wants to go down in history as the one who let poor pensioners freeze by gutting the State Pension? That’s an unwinnable PR battle in a way that squeezing welfare during a financial crisis is not.

Some fear that the State Pension could become means tested. That’d be hard to justify given that most people pay in for decades with the promise of a pension at the end of it.

Old age is a universal experience – nobody can claim it’s a lifestyle choice. It’s difficult enough to end free bus passes, so any income bar would have to be set so high that it would only affect a tiny minority of voters who could live with the change.

Is the pension system affordable?

The State Pension is not affordable, according to the latest report of the Government Actuary’s Department.

National Insurance Contributions won’t cover all payouts beyond 2032 due to waves of retiring Baby Boomers.

Lucky for us we’re not going to gamble those last two get-of-jail free cards in favour of living in an ideological fantasy-land, eh? No siree!

I can’t see the triple-lock surviving. Taxes are liable to rise, but that could take any government a decade to face up to. It’s obviously politically easier to push out young people’s pension qualification age by another year or so. But there’s a limit.

I’m more sanguine about personal pension reliefs. UK retirees rely on personal pensions for about 30% of their income versus 5% in Germany and near-zero in France where the state pension does all the heavy lifting. Any UK government that undermined the saving incentives for personal pensions would come under heavy attack for planting a pension time bomb.

A retargeting of State support seems possible: I can easily imagine a future Labour government abolishing 40% tax-payers’ relief in favour of a higher flat rate (say 25% for all), tilting the benefit away from higher earners.

But on the Tory side, even George ‘Austerity’ Osborne left 40% relief alone.

Let history be your guide

I’m not arguing that UK pensions are as untouchable as Trump’s underpants. However I like a bit of nuance when I’m spluttering over the latest outrage on my news app.

Obviously our society faces profound challenges and we’re naturally fearful in the face of uncertainty. But not every change can be chalked up as a loss. Course corrections often play out in our favour, right a historical imbalance, or are needed to keep the whole show on the road.

The last decade of pension adjustments has created winners and losers – see my scorecard below – but few of us have been on the receiving end of every change, all the time.

The UK remains a rich and politically moderate country (despite everything). We’re not likely to need nor accept extreme action. Personal pensions and the State Pension are still the best vehicles we have for securing a happy retirement and I believe they will remain so in the decades ahead.

Of course, that’s a matter of probability not certainty, but whatever happens keep calm and carry on investing in your SIPP.

Bonus appendix: Pension wins and losses in the last decade

The triple-lock – albeit it was a sop to older voters, is inter-generationally unfair, and will have to go sooner or later.

Pension freedoms – spend your pension however you like! A bold experiment in trusting people with their money. There’s bound to be casualties but the unexpected consequence could be better retirement education.

Tax relief on pension contributions – remains unmolested for most, although a rich sliver of society had their style cramped, see below.

Automatic enrollment – default opt-in has been a massive win, with participation in workplace pensions more than doubling (32% to 67%) from 2012 to 2018.

New State Pension – you’re likely to be better off if you qualify between now and 2030. See the Losses column for the rest of the story.

New State Pension – slightly more people are projected to lose than win by 2040. The DWP predicts the average loss will be £11 per week. A hefty 68% are predicted to be down by £14 per week by 2050, in comparison to the old system.

Rising State Pension ages – women have been qualifying later in life since 2011 while men have only seen the bar rise from December 2018. On the plus side, most of us are living longer. Well, until the latest life expectancy data came in.

Personal pension age – rose from 50 to 55 in 2010. The government announced the minimum age would rise to 57 in 2028 and would maintain a 10-year gap from the State Pension age thereafter. They haven’t actually got around to legislating the change yet. (I guess they got – ahem – distracted?)

Tax relief – To whom it may concern: the annual allowance for pension contributions maxed out at £255,000 in 2010-11. Your lifetime allowance was £1,800,000 that year, too. Cutting this relief for the minority helped increase the personal allowance threshold for the majority.

Next post: Weekend reading: the death of active management will be long and slow

Previous post: Weekend reading: The US market has conquered all, but that won’t be how the story ends