5 ways to reduce tax in retirement

Pssst! Want to know how to reduce tax in retirement? Want to avoid the taxman’s greasy paws legally? Alright, alright, keep it down. Let’s take this someplace quiet… 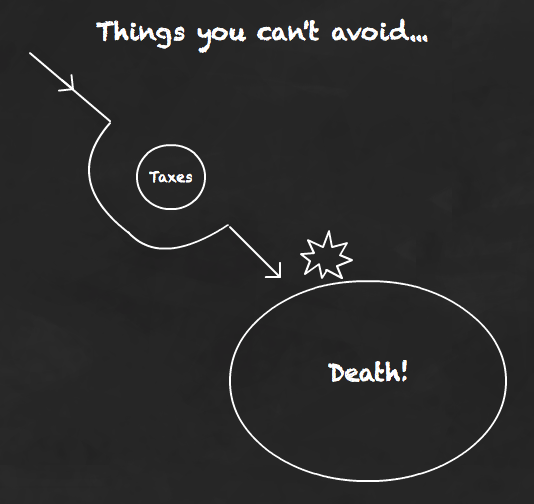 Rejoice! You can receive 25% of your pension savings tax-free.

It’s a good deal – your money originally goes into your pension tax-free and a quarter can come out similarly unmolested.

But how can you best capitalise on the government’s largesse?

Aaah, the hedonist’s choice. But this is not as extravagant as it sounds. Using your tax-free cash as income enables you to:

This enables you to boost your State Pension income and make a government-backed, index-linked gain every year for a one-off payment. It looks like being an especially good move when the flat-rate pension comes in.

A PLA is a conventional annuity that is bought with assets from outside your pension pot, such as with savings or your tax-free wedge.

A PLA is like a non-stick pan when it comes to income tax, as less of it clings on than with a conventional annuity. That’s because a proportion of your PLA income is treated as a return of capital and is therefore tax-free. Only the interest part of the income stream is taxed.

The exact amount of tax you’ll pay every year is determined by mortality tables. The quote I received on behalf of a close relative saves her 75% in tax, for no loss of income versus a conventional annuity of the same price.

Siphon your tax-free cash into an ISA and it will remain safe from the taxman. Interest, capital gains, dividends, income – it’s all off the tax radar.

This makes an ISA the perfect place to shelter some of your wealth for a rainy day or stormy season.

Arguments rage in the forum firmament over the most tax-efficient way to use ISAs. The theory goes that many basic or non-tax payers don’t benefit much from loading equities into their ISAs, because they have a generous capital gains tax allowance and because they aren’t taxed on dividends.

I’d always put equities into my ISA first. The average soul has no interest in capital gains management, and by using an ISA you’re likely to save yourself a lot of work and worry in exchange for a slightly bigger tax bill on your cash.2

Also bear in mind that bonds are taxed as interest not dividends. They should definitely be tucked up in your Stocks and Shares ISA.

Bear in mind that an ISA’s tax benefits can now be inherited by a spouse or civil partner.

Finally, let’s pipe up a lament for the dearly departed National Savings Certificates. These tax-free, government-backed savings vehicles were last available in lots of up to £15,000 per person in 2011. Grab ‘em if they ever come back.

Surplus income can be recycled into a new pension to scrub it clean of income tax.

Any income tax you pay on the £2,880 is neutralised by the 20% gain as it enters your new pension. You can then withdraw the cash and make a gain on the 25% tax free element.

If you can withdraw the cash and still stay within your personal tax allowance then the entire £720 boost will count as a tax-free gain. (Remember that withdrawing cash from a pension counts as earned income).

Note, you won’t gain the tax uplift after age 75 and pension recycling with your 25% tax-free cash is a HMRC no-no. It is widely thought that HMRC will ignore any recycling gains that are less than 1% of your lifetime allowance (£1.25 million this year and £1 million next) but there are no guarantees.

4. Avoiding tax when you die

Post April 6 2015, pension pots inherited from someone who dies before age 75 will not be taxed – regardless of whether they are taken as a lump sum or income. It also no longer matters whether the retiree had previously tapped into the pension.

Annuity income can also transfer to a spouse tax-free, if you die before age 75.

Payments from inherited pensions must begin within two years or the beneficiary will have to pay income tax. Tax will also be due if your total pension savings exceeded the lifetime allowance of £1.25 million (£1 million from April 2016).

If you die after age 75 then inherited pension pots taken as income are taxed at standard income tax rates.

Lump sums are taxed at 45%. After April 2016, lump sums will be taxed at income tax rates. That could push a beneficiary into the 45% tax bracket for one year if the lump sum is big enough.

A pension will not be taxed as long as the money remains invested.

Check out this table to see all the tax wrinkles at a glance.

If you make it to 75, it may make sense to accelerate your drawdown rate and squirrel any surplus income into an ISA, as an ISA’s tax-free benefits can now be inherited by a spouse or civil partner.

Because the old 55% death charge has been abolished, some people are now paying more into their pensions in order to help their beneficiaries avoid inheritance tax.

Retirees used to benefit from a more generous personal allowance, but this has been axed for anyone born after April 5 1948. Now they get the same as the young ’uns.

The age-related allowance has been frozen for anyone born before the threshold, and it will gradually be worn away as the mainline personal allowance rises.

The State Pension is taxed as normal, too, so any income you earn over your personal allowance will be taxed at 20%, and then 40% – and 45% if you’re doing very well.

The trick for couples is to make sure that you both max out your personal allowance when you retire so that the minimum amount of household income is exposed to tax.

There is no special formula for this. Just keep your eye on your retirement forecast and make extra pension contributions where they’re most needed, buy missing NICs, consider deferring your State Pension, and so on.

That’s all the methods to reduce tax in retirement I know about. (At least without consulting high-fee specialists with offices in the Cayman Islands, Liechtenstein, and Bermuda…)

If anyone else knows any legal tax avoidance techniques then please post them in the comments.

Note: This article on avoiding tax in retirement was updated in April 2015. Archived reader comments below may refer to an older version or to outdated regulations, so check their date.

Previous post: SIPPs vs ISAs: pensions knock ISAs into a cocked hat if you want to retire