How much wealth do I need in my ISA versus my SIPP to achieve financial independence? 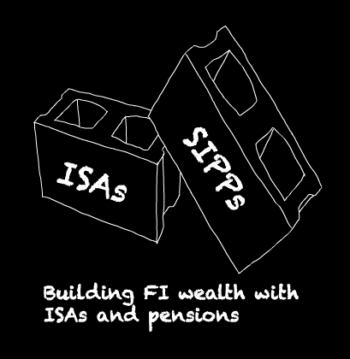 This is part three of a series on how to maximise your ISAs and SIPPs to achieve financial independence. Part two explained why the tax advantages of personal pensions make them superior to ISAs later in life. Be sure to also read the first part of the series.

To make the most tax efficient use of your savings, your ISAs need only fund the years between early retirement and your minimum pension age.

Obviously it’d be marvellous if our ISAs piped hot income streams into our lives long after that, but our primary concern is to fund them so we’re unlikely to run out of money before our personal pensions take over.

That’s because there’s no point oversaving into our ISAs, either. That would see you delay financial independence by paying tax that would have instead been clawed back through pension tax relief and added to your growing nest egg.

Should investment returns turn out to be poor, we would expect our ISAs to be running on empty as we dock with our SIPPs.1

We would then discard the ISAs like empty booster rockets and ride on using our SIPPs, and eventually a State Pension slingshot.

To put that plainly:

Phase 1 – You need to be able to draw all your income needs from your ISA / taxable accounts without fear of running out of money,2 until you reach the minimum pension age.

Phase 2 – You need to be able to draw all your income needs from your personal pension, once you can access it, without fear of running out of money until you die.

We’ll construct the plan so the State Pension is primarily a back-up and, later in the series, we’ll draw upon research that shows how you can adjust your plan to account for it.

How much income and for how long?

These are the big two questions to answer for each phase of our plan.

Guesstimating your required retirement income is not so hard, especially if you already track your expenses.

Let’s say you’ve decided you’ll need £25,000 per year for the rest of your life. (We’ll assume all calculations are in real terms, so we’re accounting for inflation.)

How much wealth do you need in your ISA to sustain £25,000 in annual income?

It depends on how long you need that income to last (Phase 1) before your pension income becomes available (Phase 2).

There are two basic ways to fund your Phase 1 pre-pension, post-retirement income:

1. The usual sustainable withdrawal rate (SWR) approach – a portfolio of mixed assets in your ISA that you ‘create’ an income from by selling a planned proportion each year.

2. Liability matching – a big pot of cash or bonds3 that won’t grow much or at all after-inflation, but that starts out big enough to take your desired income from each year until you can crack open your pension.

Let’s look at both in turn.

Method #1: Drawing down an ISA portfolio

The infamous 4% rule says we need to build wealth that’s worth 25 times our annual income requirement to become financially independent.

But the 4% rule applies specifically to 30 year time frames.

What if you only need your ISA to last ten or 20 years until your personal pension comes on stream?

Then your sustainable withdrawal rate (SWR) from your ISA can be higher.

Let’s say you can use an 8% SWR to sustain spending from your ISA for ten years.

We can save much less into our ISA in that scenario:

Now we only need ISA wealth of approx £312,500 to draw an income of £25,000 for ten years. After that, we will look to rely on our personal pension income, if our ISA is exhausted.

Bear in mind that a SWR calculates the maximum amount you can take from your portfolio without running out of money, based on historical returns data. (Terms and conditions apply.)

In most scenarios, you actually end up with a healthy surplus in your account when you use an appropriate SWR, even if your retirement was blighted by economic times of darkness such as the Great Depression, Stagflation, and the World Wars (provided you were on the winning side).

Nonetheless, we want a plan that minimises the chances of being forced back to work against our will.

We’ll therefore use cautious SWRs throughout this series that suit our possible timeframes – no matter if we need our tax shelters to last ten years or 50.

The safest way to fund your retirement is to match your future expenses (liabilities) with a treasure chest of near risk-less, guaranteed income.

A ladder of inflation-linked bonds would be ideal.

In the ISA example above, a tranche of your bonds would mature every year, depositing £25,000 of inflation-adjusted income into your account for each of the ten years until you can access your pension.

Alternatively, you could save up enough cash to cover the ten years, remembering to factor in an allowance for inflation.

Liability matching with low risk assets generally requires more capital than investing in an equity heavy portfolio. The more resources you have, the less growth you need, and the less risk you need to take. It’s a trade-off.

My assumptions suggest that it’s likely quicker and safer for everybody to save cash4 to bridge an eight-year gap or shorter, between Phase 1 and Phase 2.

I’ll go into more detail on this later in the series.

Our ISAs need to span the gap between our early retirement age and our minimum pension age – the latter being when we can officially smash open our defined contribution pensions like piñatas.

Which will be when exactly?

Unbelievably – ahem – that’s not so easy to pin down.

Currently you can get into your defined contribution personal pension from age 55.

But the 2014 Coalition Government (remember them?) indicated that the minimum pension age would rise to 57 in 2028. Your minimum age would then be set to ten years before your State Pension age, from then on.

Thing is, they didn’t get around to legislating the minimum pension age change. So it’s not yet law. And then Brexit happened. Eyes were taken off the ball. Now no one knows what’s going on.

We don’t know whether the rise in the minimum age will take place as mooted. But many industry insiders say the change is still coming and can be legislated whenever the government likes, so it’s best to assume the worst.

Not so fast. There has been talk of tapering the change in. It could be you’re still caught out, even if you’re 55 a few years before 2028.

We’ll play it safe by assuming that our minimum pension age is set to ten years before our State Pension age for the purposes of the upcoming and unbelievably exciting case studies we’ve got planned for this series.

These case studies will also show how to calculate how long your ISAs will need to last (roughly), given your current circumstances.

How much do you need in your personal pension?

By the time you retire, your portfolio – when combined across all accounts – should be funded to last the rest of your life. How long might that be? If you’re age 60 or less today then you have at least a 10% chance of living to age 98 according to UK life expectancy data – unless you have good reason to think otherwise. There’s an even greater chance that one of you could survive if you’re part of a couple.

SWRs tend to reduce over longer periods of time, but the curve flattens out. Multiple research papers point5 to a 3% SWR being suitable for retirements of forty years and over – which likely accounts for the majority of people on the FI fast track.

Carrying on the £25,000 retirement income example, the wealth needed to sustain lifetime spending for over 40 years at a 3% SWR is:

We’ve established that the ISA portion of this wealth target needs to be £312,500 to ensure it doesn’t run out before the pensions come on stream ten years later.

Therefore, your personal pensions need to be funded to the tune of:

My thanks to Monevator readers Aleph, Naeclue, and Oxdoc whose dogged persistence corrected my mistaken assumptions when this article was originally published.

In the next post, we’ll cover how to choose a credible SWR that matches your personal timeframe and accounts for a low interest rate world, non-US investment returns and the implications that has for your asset allocation in retirement.

Next post: Getting hands on with your budget with Money Dashboard