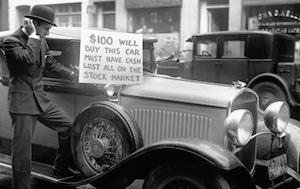 You’d think we’d know better by now. Unlike our forefathers who traded houses for tulips and bought US railroad stock on hock, we’ve got behavioural finance to remind us our caveman brains go all Harlem Shake when trying to weigh up risk and return.

But no, even now there lurks inside each of us a Jekyll and Hyde investor, itching to run with the herd, to jump off a cliff, and to generally get emotional about what should be the rational business of investing.

And so risk in investment swings from meaning the fear of losing money to the fear of missing out – just like it did 100 years ago, and 300 years before that.

In a deep bear market, all the talk is of capital preservation. Having lost their shirts, investors fear losing their pants.

In contrast, when markets hit new highs you’ll hear far more about the risks of missed opportunities. The foolish chase hot shares and funds, and may even abandon their asset allocation altogether.

You say risky, I say risqué

The start of 2013 was a case in point. In just four years we’d gone from a stock market crash – and talk of the death of equities, of buy-and-hold investing, and of capitalism itself – to a roaring bull market.

It seemed that almost overnight many more people agreed that cash was trash, bonds were in a bubble, and equities were the only game in town. Yet precious few of these voices were heard when shares really were cheap.

Worse, such opinions seldom come with even a nod to individual circumstances.

Your aim in investing should probably not be to try for the maximum possible return – or even the most likely maximum return.

Your aim is to meet your investment goals. The big risk is you don’t.

Beta not pay too much attention

Even those two different uses of the word “risk” – of losing it and of missing out – barely begins to cover risk’s many guises when it comes to investing.

For example, to academics the upside and downside risk of a share is treated as the same thing. When they say risk, they are talking about how far shares or other assets have previously moved up or down in price terms, compared to the market – something we might instead call volatility.

But even if you believe market efficiency underpins all our investing choices, in my opinion their notion of risk is not of much practical use, whether you’re a passive investor working out a retirement plan or a value investor looking for bargains.

Passive investors should be more interested in asset allocation and the likely range of potential returns over the long-term – and in the prospects of falling short of their goals.

We should laugh at the proposal that Sainsbury shares at 240p in 2009 were a higher risk investment than at nearly 600p in 2007, whatever the academics say.

There are myriad other kinds of risk in investment – from currency risk to political risk to interest rate risk.

But the main one we’re interested in is the risk of permanently losing money.

Here academic notions of risk as volatility can make peace with a more common sense idea of risk as the chances of living off baked beans in your old age because you blew your pension spreadbetting.

The academic sort of risk – volatility – increases over time. But the deviation of your annualised returns versus those you expect based on historical precedent tends to decline over time. The UK stock market has fallen 20% or more in a year several times, for instance, but it’s never delivered a minus 20% annualised return over a decade, or anything like it.

This graph from Barclays Capital makes the point clearly: 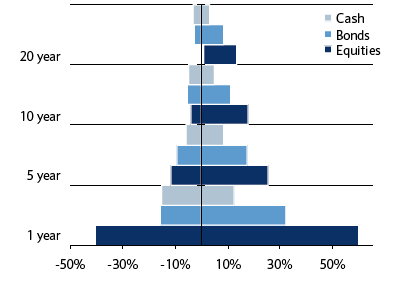 Note how the range of returns decreases the longer you hold

The longer you hold a basket of shares, say, the more confident you can be of achieving the expected returns.1 Investing in shares is less risky over the long-term, than it is in the short-term.

This is why we’re advised to reduce (not eliminate!) the amount we have invested in the stock market – the riskiest asset over shorter periods – as we age, and to increase the proportion of less volatile assets like cash and bonds. We simply have less time ahead for the superior returns we expect to earn from shares (on average) to compound and outpace their year-to-year volatility, and so we can’t be confident of getting the return we’re banking on.

Note this doesn’t mean share prices, say, won’t keep going up after you sell a few. The stock market was doing its thing long before you arrived and it will trundle on long after you do. It’s a tool, not a competition.

It also doesn’t mean that my 70-year old mother and I can’t agree that, for example, the stock market looks good value whereas bonds seem expensive.

But it does mean the damage done if we’re both wrong is potentially far greater for her than it is for me, if she ignores the rules of thumb about asset allocation and holds the same proportion in equities as I do.

I have time on my side. She does not.

I’ve had spirited discussions on Monevator with readers who were all-in cash, others all-in equities, one or two who were all-in emerging markets, and even one who was 100% in gold.

All the individuals concerned are articulate, personable-sounding folk that I enjoyed arguing the toss with. But obviously they can’t all be right, given that their positions contradict each other.

Luckily, being right or wrong is a risk you don’t have to take.

By all means favour some asset, sector, or geography if pure passive investing isn’t your game. But be very wary of betting the farm, especially if you’re closer to the end of your earning years than the beginning.

At some time or another, all asset classes and stock markets around the world have delivered unexpectedly terrible returns for years on end. You only live once, and I doubt you’re here to discover how it feels to be all-in on the next Japan.

By diversifying across assets and countries – and by not going entirely in or out of cash, bonds, equities, gold, property or anything else, even when you suspect you’re slightly reducing your returns by doing so – you can make sure that the all-in-a-sinkhole feeling is somebody else’s fate.

Howard Marks puts it very well in The Most Important Thing, his wonderful book on investing:

We may have an idea which one outcome is most likely to occur, but we also know there are many other possibilities, and those other outcomes may have a collective likelihood much higher than the one we consider most likely.

[Given this] we have to practice defensive investing, since many of the outcomes are likely to go against us.

It’s more important to ensure survival under negative outcomes than it is to guarantee maximum returns under favourable ones.

True, I guarantee that by diversifying you won’t win – not in the very narrowest sense of the word.

Some particular slice of some asset class or another will be the top performer over the next decade. If you’re diversified, you might well own a bit of it. But someone somewhere will own nothing else.

Putting up with the boasts of the reckless few who bet everything on black and won (or who claim they did) while remembering the silent losers who went all-in on the wrong horse is all part of the challenge.

But my idea of winning investment starts with avoiding losing, and with always remembering why I began investing in the first place.

Next post: Weekend reading: How the Dow nearly made me a celebrity

Previous post: Weekend reading: Why passive investors should give up on perfection