How to stress test your retirement plan

Are you saving enough for retirement, and will your retirement plan survive a damn good buffeting by an uncertain future? Obviously nobody knows, but you can stress test your strategy with a Monte Carlo simulator.

A Monte Carlo simulator takes your predicted pension pot and pits it against multiple visions of the future. It subjects your portfolio to random return sequences to determine the chances of your money running out before you breathe your last.

Staying in the black until you cark it is a win.

In contrast eating dog food in your eighties is not shown, but is the unsavoury implication of failure. 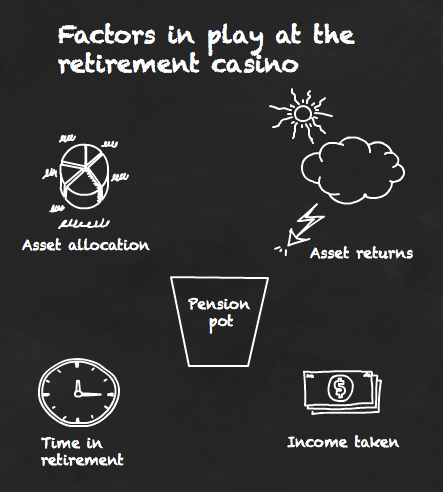 In some return scenarios, the 1980s dream sequence for equities will bubble into the dot.com boom and turn you into a multi-millionaire.

In other possible worlds, you’ll get hit by the Great Depression then World War 2 then the 1970s oil crisis, coming one after the other, like the three buses of the Apocalypse.

The main interest lies in the big % number written on your scorecard at the end. Handed out, as if Death himself was a Strictly judge, this shows the likelihood that you haven’t emptied your pot before you’ve completed the waltz of life.

To run a stress test on your own retirement plan, head to Vanguard, which hosts a free Monte Carlo retirement calculator that’s very simple to use.

The calculator wants to know:

Your total pension pot – I used the figure projected by Hargreaves Lansdown’s calculator based on my existing salary and contributions (as we’ve previously discussed). Ignore the Vanguard calculator’s request for your portfolio’s balance today. Instead insert your projected pot as it will stand on the day you retire (but in today’s terms).

The annual income you require 1 – I used my current budget because I’m already a money-saving maven. I’m not going to spend much less in retirement unless I’m afraid to leave the house. If you’ve never imagined what your retirement income might look like, try this suggest-o-tron.

How long you plan to live – Use the national averages, or try a life expectancy calculator, or accept the 30-year default.

Your asset allocation – Use your current risk tolerance and these rules of thumb to guesstimate your likely asset allocation when you’re retired. Once you start playing with the calculator you’ll discover that there’s much less room for manoeuvre than you might imagine.

Run the simulator, let the digital dice roll, and you’ll end up with something like this: 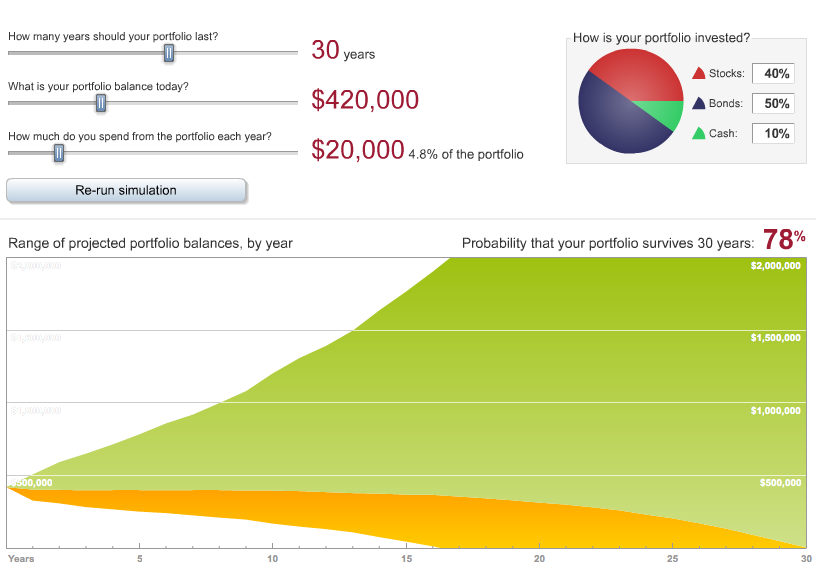 The green zone represents all the time streams in which I lived happily after. The orange area shows the scenarios in which I bitterly regret not having children. In the worst-case scenario, the money tap runs dry after 16 years.

The important number is 78%. That’s the probability of my portfolio lasting for 30 years based on every scenario in the sim.

That’s not great. I’m not prepared to risk a 1-in-5 chance of hitting the skids.

Well, I could plan on cashing in my chips earlier.

What else? I can spend less, retire later, save more, and invest more aggressively.

Sticking with the moveable parts of the calculator, I try upping my equity allocation. But I can only hit an 81% success rate even with portfolios of 50 – 75% in shares. Not good enough.

A kick in the assumptions

For simplicity’s sake, I haven’t taken into account my state pension or the fact tax would reduce my £18K spending money to £16.5K. Do work these factors into your own retirement plan.

UK investors should bear in mind that this is an American calculator that uses historical US asset return data (from 1926 to the present day).

Many commentators argue that this was a golden age for US assets that’s unlikely to be repeated. On top of that you can knock off about a point of growth every year to represent UK returns lagging the US.

As the returns data is based on indices, there’s also every chance that the simulator doesn’t take into account investment fees (although it doesn’t say so in the fine print), which will deplete a pot even faster.

Not including my state pension makes my results conservative enough to allow me to feel comfortable about the above issues, however.

Another thing to keep in mind is you don’t know how often you ran out of money with, say, less than 24-months on the clock. Quality of life may not matter as much near the very end.

Lastly, this kind of calculator assumes you draw down your portfolio until it runs out or you do. In reality, you may want to annuitise a large proportion of your pot and take the guessing out of the game. But that’s a different story.

This is the end, my friend

For all these reasons and more, you shouldn’t treat these numbers as gospel. At best they enable you to circle within the vicinity of your retirement destination. They’re not exact co-ordinates.

Darrow KirkPatrick from the excellent Can I Retire Yet? blog advises using several different retirement calculators. That way you’ll get a range of answers that would make an astrologer sound precise. The process should dispel the notion that there’s one, ‘true’ number to shoot for.

I highly recommend trying Firecalc – it’s an excellent Monte Carlo sim with all kinds of tweakable options. Too much fun.

The vagaries of these calculators become a metaphor for the uncertain future ahead. Because however your retirement plan turns out, for better or worse, it won’t return the same answer as the calculator.

Next post: How to keep child benefit and retire richer