Know your own risk tolerance 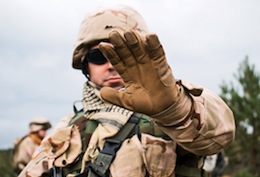 One of the side effects of using the word risk in investment is the connotations of bravery, cowardice, and going for glory.

Loading your investing decisions with such emotional baggage is about as healthy as loading your potato skins with cheese, bacon, and sour cream.

It’s not as if risk even has a precise meaning in everyday use. Risk is very different if we’re talking about taking a shortcut down a dark alley to the supermarket, a paratrooper going out on patrol in Afghanistan, or Warren Buffett spending $20 billion to buy a company.

I’m notoriously risk-averse in real-life. I emailed friends in vindication when the horsemeat scandal broke, since they’d all suffered from my pickiness about food.1 I’m not exactly the first one through the doors of a dodgy pub in a foreign city, and I avoid winter sports for the same reason Dustin Hoffman avoids flying in Rainman.

Yet when investing, my risk tolerance is as high as anyone I know.

True, everyone takes risks when they invest. I’ve one friend who shuns shares except for periodic punts on tech companies, and others who keep all their money in cash.

My first friend risks losing his entire investment – though not everything as most of his money is elsewhere in a business.

The second group risks losing the lot to inflation.

I believe my diversified, equity-denominated portfolio is far less risky and potentially more rewarding. Yet my co-blogger The Accumulator quails if I tell him I’ve put a five-figure sum into a small cap property company.

For him it’s the risks of lagging the return from the market and losing out in trading costs that loom largest.

You call that a reward?

Even the flipside of risk – reward – means different things to different people.

My share-punting friend says he wouldn’t get out of bed for 6% real returns a year. He’d rather re-invest in his business. A reward for him, rightly or wrongly, is something that moves the dial now, not in 20 years time.

In contrast, I see him putting too many eggs in one basket.

My risk-averse mother isn’t fussed her portfolio of investment trusts increased its dividend payout last year. But she was excited when I told her the portfolio value had risen by so many thousands of pounds – even though the shares were bought for income, she many never sell them, and I’ve warned her they could as easily go down as up.

At the far end of the spectrum, the soldier in a warzone may be rewarded for putting his body armour on. He might only lose a leg, not his life.

Because you’re worth it

Risk, then, is a personal thing. You say to-may-to, I say tomato, you say banana, I see a banana skin.

This may seem obvious, but in my experience it’s not.

I was recently challenged in the comments on Monevator because I said pound-cost averaging a lump sum into the market was a sensible strategy for some people, if it reduced the chances of them losing a great deal of their new money in a sudden crash and they couldn’t emotionally take it.

The counter-argument was that over most periods, investing a lump sum immediately has delivered a higher return. Pound cost averaging was therefore “irrational”, and I should try to get people to see that.

But I don’t think it is always irrational.

Many people would happily take 5% returns over 20 years instead of 6%, if it meant a much smaller chance of losing 30% in any one year.

Certainly people should know the risks and rewards of their choices. However the decisions they make are not irrational just because they have an emotional component – and certainly not just because they reduce the potential return.

To say otherwise is to look at only one side of the equation – like speeding without considering the chances of a crash (or a divorce and a spell in jail!)

Even financial advisors have my sympathy when it comes to advising clients about risk.

What a terrible job!

Most people are more risk-averse than they think, and hate losing money. Whereas gains they shrug off as the natural order of things.

Yet few people go to a financial advisor to hear how to make a fairly secure 3% real return a year.

Unfortunately, even if you agree that risk taking is a matter of personal choice, it’s difficult to judge your own tolerance ahead of a market crash, a recession, losing your job, or whatever else life throws at you.

(We’ll ignore the ‘upside’ problem of your returns being much higher than you expected. That’s only a drawback in the world of academics!)

You might vow to regard risk as just as important as reward, and choose an appropriate portfolio. But that’s a rational decision, not an emotion, and we’re emotional creatures.

The danger is that when the shares hit the fan, your emotions will take over, with damaging results.

Education can help. You might know you’re very afraid of losing money, say, but you’re convinced by the historical return from shares. So you could read all about previous stock market cycles to prepare mentally, and maybe begin trickling a small amount of money into shares over the next few years to get started.

The snag is we only live once. Take too long getting comfortable with risk and you might not have enough time to get a reward.

Worse, even a decade of experimenting might not tell you much. Plenty of investors in the 1990s felt very confident about shares. Only the thought of missing out on the biggest gainers bothered them! Then two bear markets in a decade slammed them for six.

Equally, some people seem wired for silly risk taking. Las Vegas exists because such people will always shrug off losses to try to make back their money.

My share-punting friend will probably never change. The best I can do is encourage him to lock some regular savings away in a pension fund, and hope he doesn’t learn about self-managed SIPPS!

How to explore your own risk tolerance

Here are some ways to better understand your own attitude towards risk.

Discover what others do

Read up on rules of thumb about risk, returns, and asset allocation. They’re not perfect but they are time-tested. Generations of investors have seen their fortunes ebb and flow, and these rules are the collective folk wisdom that’s been left when the tide’s gone out.

Instead of exclaiming, “What are the chances of that!” when someone says your portfolio is too risky, use a Monte Carlo simulator to find out. Is it worth a 10% chance of having no money at 75 for a 2% chance of having a maximum gain of £3 million, instead of £2 million? I’d suggest not.

Look at photos of your parents when they were young, and again when they’re old. We have trouble imagining ourselves in our old age – but in most cases that’s who you’re taking risks for.

Experiment with the new risk tool here on Monevator, developed by the boffins at Which? It asks how much you’re prepared to lose in a year, and suggests different portfolios as a result. (I wouldn’t fuss over the exact asset allocations it suggests – thinking about the potential payoffs is the idea here). 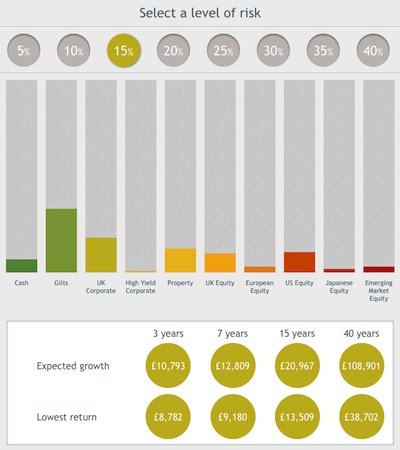 Click this image to go try the risk and portfolio tool!

Now none of these methods can really tell you how it feels to lose half your pension the year before you retired because you stayed 100% in equities too long.

But working through them puts risk and reward into the spotlight where it belongs.

Tip: Consider all the risks when making investing decisions. The first reason to invest is inflation, which erodes the real value of your money even as its nominal value stays secure. Over the long-term, inflation could be a bigger risk than temporarily losing 20-30% of your money in a crash.

Search for the hero inside yourself

Outside of the City and Wall Street, investing is not about beating the rest. It is not a macho sport.

I’d guess my own risk tolerance is higher than perhaps 90% of Monevator readers, although I’m not sure all of the newer arrivals to the market know it. I’ve seen my net worth plunge faster than the Liberal Democrat vote at a local election and I know I can endure it. In contrast the last few years have been a nirvana for shares, and complacency is building.

But despite my own attitude to risk, you won’t find me berating you for keeping 50% of your funds in cash, let alone for paying down your mortgage instead of gearing up to invest in shares.

Risk comes down to your own circumstances, goals, and your own gut feeling. Don’t take the risk of anybody convincing you otherwise.

Previous post: Return premiums that can rev up your portfolio