My view on the current valuation of different asset classes, followed by this week’s money links.

Last week I mentioned I’ve been selling down equities since late March. I hope I was clear this was an asset allocation decision, not a call on valuation.

That was the buy of the century, but 13 months on I don’t want to push my luck, given that I may want to buy a house in the next five years.

I still remain more than 75% invested in shares. By most measures, this is too high. But I still see equities (including REITs) as reasonable value and most other assets as expensive.

Please remember I’m just a chap on the Internet. I’ve had a good run in the past 18 months, pointing out on Monevator the government bond bubble, the opportunity in corporate bonds, and in commercial property.

But a different economic outcome would have made all those articles look dumb. If was right all the time, I’d have retired!

I was buying shares in early 2008, for instance, and I’m finally going to lose my holding in Jarvis – an old position I kept just to remind me of my potential for crap decisions – because it’s now in administration.

This then is a personal view given in the knowledge that asset valuation isn’t art or science so much as witchcraft. It is definitely not advice.

As this article points out, in April 2008, the FTSE 100 was also around today’s level at 5,800. The P/E was near 11 then. This shows how much earnings were clobbered by the recession.

Still, earnings have been growing strongly for 12 months and I expect this to continue. Most companies I look at are leaner, have spare cash, and even the dodgy banks are returning to profitability.

On Schiller-style cyclical basis, you need to expect earnings to grow strongly to call shares cheap. Otherwise they look fairly valued, according to Richard Beddard’s assessment of long-term PE, which has them on a PE of 15. 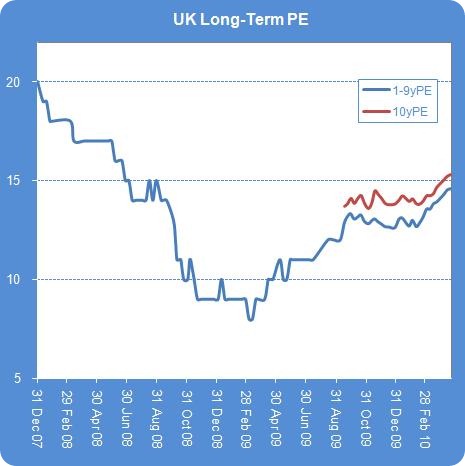 Beware of banking on P/E ratios. It’s very easy to forget the ‘E’ (the earnings) side of the ratio, and think shares are too expensive for years. Eventually the P/E drops and the hapless investor piles in, just as earnings collapse!

When I sold shares recently, I focused on early stage winners, especially the big miners. They are also exposed to the dollar, which I also lightened my exposure to – by selling HSBC, Pearson, and some of my FTSE 100 passive funds.

I’m not really predicting a huge rally for the pound. I just thought most of its decline against the dollar was now priced into UK shares. (Predicting currency moves is infamously tough).

Overall, I think the long-term case for shares is strong, after two decades of under-performance.

I still like these a lot, and have added to holdings in the Aberforth Smaller Companies and the Rights and Issues investment trusts, as well as a smattering of individual small caps.

The manager of Aberforth argues that his fund is the cheapest it’s been in 15 years, based on P/E levels, dividends, the discount, and the valuation gap with large caps. Rights and Issues is more geared towards UK capital spending, but it is finally coming good. (Horrible spread, mind).

Pretty much fair value if you think earnings can keep bouncing back, otherwise looking pricey. (For the currency issues for UK investors, see ‘overseas shares’ below).

Personally, I think earnings will keep growing, but the chart below (pointed out by Investor Junkie) shows the risks. It plots the P/E according to the Schiller method of evaluating over a ten-year cycle (so-called PE 10): 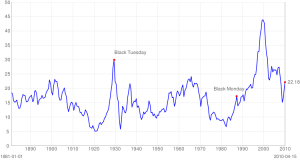 You can plot an up-to-date chart for yourself at the Multipl website.

I reluctantly sold my holding in Polar Capital’s technology trust to fund this year’s ISA allowance – I think technology could boom for years from here, and US tech stocks still look cheap.

The long-term case for US equities is strong, after two decades of under-performance versus bonds.

Most of the developed markets moving in tandem over the medium term, although over the longer-term the US has done better in recent decades and Japan has stiffed.

This makes investing overseas as much a currency play as an asset diversification issue. Small changes in P/E or growth will be dwarfed in the short-term by big currency swings.

With the pound looking cheap versus the Euro, the dollar, and the ever-mighty Yen, I have repatriated some overseas exposure in the past couple of months, although I retain about 50% of it for diversification purposes.

After a strong bounce in summer 2009, it’s gone nowhere for six months. I sold my holding in the IUKP ETF and rolled the money into very safe looking Daejan, a specialist property company, but I’ve already begun buying Land Securities with my spare cash!

On a ten-year view, I think the blue chip UK commercial property REITs (Land Securities, British Land, and a couple of others) are a cracking opportunity.

The value of commercial property plunged, but rents held up well through the recession. The companies took huge paper hits and had to sell property and raise money via rights issues, but this was mainly to protect their banking covenants. Laws that forced them to issue profits as dividends are being re-examined.

Land Securities has a decent yield. If the share price followed annual NAV upgrades by say 8% a year over the next 10 years, I think I could easily triple money invested here on a total return basis.

It’s true the big REITs are trading at a premium to asset value. But remember I think the UK recovery is on track. I therefore expect more NAV upgrades.

Right, I need to speed up as this post is getting massive!

Cash to me looks ‘expensive’, in terms of the return and the inflation rate. The best cash savings account pays 2.8%, versus CPI inflation of 3.5% and RPI inflation of well over 4%.

In other words, money held in cash is losing value. I may look at National Savings inflation-proofed certificates with my newly-liberated cash, but the return over inflation is puny and we can’t bank on the BoE missing its target every month.

I watch the ten-year gilt like an adolescent boy who has discovered girls, but after a good move in 2009 it is now stubbornly stuck at around 4%.

This is very frustrating – government bonds are a truly useful asset class for diversification purposes.

To me though, 4% is not good enough. I suspect government bonds could be at the end of a 20-year bull market (everything ends eventually!) and it’s hard to judge how much QE and bank hoarding is holding the rate down.

If there’s a decision I may come to regret it’s not holding some government bonds. They are indispensable in a crisis, but for now I prefer cash.

In my view, the great opportunity in corporate bonds is over. Sure you can hunt around and find slightly riskier issues with slightly higher yields over government bonds, but these don’t reflect the risks.

Spreads have narrowed back to near pre-crisis levels, and since I think government bonds are expensive, corporate bonds don’t fare any better. I’m not at all interested in junk / high-yield bonds.

Gold and other commodities

You tell me! Gold looks expensive, seeing as the world didn’t end. I wish I’d bought copper and oil and the like in the panic of late 2008, but that’s essentially punting – unlike equities you can’t hold for an income until they come good.

If gold halved in price I’d probably add some for diversification, but it’s finger in the air stuff.

Other bits and pieces

There remain several interesting quirks in the market, such as PIBs yielding far above cash, Lloyds preference shares on near-12% yields (after a couple of years without payment) and still fairly heavily discounted private equity investment trusts.

Some Venture Capital Trusts still look cheap, though the 10% tax-free yields of 2009 have largely been priced away.

I continue to take small positions in some of these, but I don’t really write about them on Monevator, since they don’t have much to do with sensible long-term investing. They’re more like ‘varmit’ hunting from a helicopter in Vegas!

Stock Tickle was going to be the home for them, but that’s becoming more of a market news nibbles site. Decisions, decisions!

I wrote about the benefits of interest only mortgages, gave Goldman a break, quoted Clarkson on pensions, and ran Jacob’s final post on how to retire early.

This as ever for dropping by. (Tell your friends! 🙂 )

Pick of the blog posts

Easier to get to your PC than a newsagent? Subscribe to get this roundup every Saturday!

Previous post: Do you want to retire early enough to save 75% of your income?