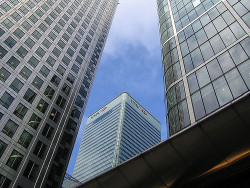 I think the time has come to buy commercial property. And almost nobody agrees with me.

Hooray! The fewer buyers now, the merrier my eventual returns!

Commercial property is a core asset class. Yet most private investors only consider buying property after a long boom – when the fund industry is crowing about years of double digit gains, when their house’s value could pay off a small island nation’s national debt, and when they can’t even find their office because of all the new developments on the way to work.

Here in the UK, commercial property funds returned about 18% per year between 2004 and 2007. And boy did they like to remind us, with a huge advertising blitz that sucked in more money, prolonging the boom.

Investor interest reached a peak in 2006 after a rule change allowed commercial property funds to be held in an ISA. In terms of helpful legislation, the Government might as well have allowed drunk driving – as long as only one hand was kept on the wheel (the other being required to grasp a bottle of vodka).

We now know this whole boom was built on leverage, but even to property bears like me that wasn’t entirely apparent then.

What was clear was yields of 4% on commercial property in 2006 were not sustainable.

Property investing is about income AND capital. But with such tiny yields, the only way a new investor would make money in the medium term would have been if even more gullible investors had come along to bid up the prices of their office blocks and shopping malls, further driving down the yield. It’s stupid to bank on stupidity.

Commercial property since 2006: The horror, the horror

As always the bubble burst. Commercial property started falling in value, and panicking investors in UK funds found themselves unable to withdraw their money.

One hot manager, New Star, which had launched a massive property fund at the top of the market, was eventually taken over for a pittance.

According to the BBC, 2008 saw a record fall in the value of commercial property:

The UK Quarterly Property Index showed commercial properties lost 26.4% of their value last year – the most since records began in 1987.

The values of office buildings, shops and warehouses are now broadly in line with December 2001 levels.

Five and a half years of growth has been lost in 18 months of successive falls, IPD said.

Values were down 14.4% in the last three months of the year compared to the previous quarter, another record fall.

“In nominal terms, we have never tracked a year with this level of capital decline,” said Ian Cullen, IPD’s co-founding director.

Total returns on investments also fell by 13% in the final quarter compared to the three months to the end of September, and by 22.1% over the year.

Many investors withdrew from commercial property last year, prompting some funds to introduce delays on when people can get their money.

According to the same article, property investments lost 22% of their value in the year.

The iShares UK property ETF: Not so much a share graph as a ski jump

True, the ETF tracks listed property companies, which are more volatile than property funds. But it’s still a staggering drop for an asset class that’s supposedly less risky than equities.

This isn’t an unambiguous sign of value for sure. Commercial property was way over-priced in 2007, and the IUKP ETF won’t be seeing £10 a share for a long time (it’s currently about 300p).

In terms of actual prices paid for actual buildings, UK commercial property is down about 45% in real terms. But it’s hard to be sure how accurate a figure that is, since the market was dead for most of 2008.

The positive spin is it may mean prices fell too far due to forced sellers. The negative view is prices have held up due to a lack of supply, and will fall further when the market gets going again.

I first bought IUKP about a year ago, when I was already salivating over a 50% price drop. It fell another 50% since! Timing is as ever difficult-to-impossible.

Nevertheless, I think on a yield around 7%, now is a great time to add more of this ETF to my ISA portfolio, and I’ve done so in the past couple of weeks, paying about 290p.

I’m also looking at big UK commercial property investment trusts, and have made a small investment in the F&C Commercial Property Trust. It’s got low gearing, a nice portfolio of quality property, trades on a discount and yields 8%.

I’ll probably invest more money into commercial property in the next few weeks.

I don’t expect a straight ride up. But I do think most of the risk of investing in commercial property is in the price, and there are good reasons to think today’s opportunity to grab decent yields won’t last forever.

Next week I’ll explain five more specific reasons why now is a good time to buy commercial property, so do subscribe to get the lowdown.