Cash and bonds are different investments 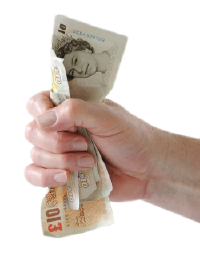 A mistake even experienced investors make is to think of bonds and cash as identical.

Bonds are not the same as cash. To confuse the two is a flogging offence in my book, yet it’s a very common slip.

David Kuo, Head of Personal Finance at The Motley Fool UK made the mistake of mixing up cash and bonds in an interview only last week.

“Do you buy into that rule of thumb, that says that you express your age as a percentage, and that should be the amount of your portfolio allocated to cash? – so somebody who is 20 years of age should have 20% of their portfolio in cash, a 30 year old should have 30%, and so on and so forth?”

As my link explains, the rule of thumb is to hold your age as bonds, not cash.

I’m sure it was just an honest slip and I doubt Monevator is error-free, but I still think it’s a telling mistake.

The fund manager being interviewed later points out the flaw in substituting cash for bonds:

“I wouldn’t necessarily say cash either, cash has not generated such good returns as fixed interest over the very long term, so you’re better off probably suffering a liquidity risk with fixed interest investments, rather than cash.”

I’ve talked about liquidity risk before. In the case of bonds, it is the risk that your investment will be worth less than you paid for it at any particular point in time, due to the fluctuating value of bonds.

This risk is just one of the several important between cash and bonds.

As you can see, quite a difference!

I get where the confusion between cash and bonds comes from.

Private investors generally think either “equities or not equities”, rather than considering cash as a separate asset class or grappling with the nuances of fixed interested and the differences between government bonds and corporate bonds.

Meanwhile institution investors moving around vast quantities of assets often don’t have the option of going to cash for any meaningful period. Instead, when they ‘go liquid’ they typically go into short-dated government treasuries, which are ‘cash-like’ investments but are NOT cash.

Company reports use terms such as cash-like or near-cash when describing their assets, too.

Yet the fact is you could put £10,000 into long-dated UK government bonds paying say 5% interest and I could put £10,000 into a bank account paying 5% (ah, remember those days?) and after a year your bonds could be worth anything thousands of pounds more or less, while my cash would still be worth £10,000 (assuming we both withdraw our income).

If you held your bonds until maturity and we kept spending our interest, then you’d redeem your bonds and have the same amount of money as me.

But if you needed to sell up in-between? Finger in the air time.

Sure, if you had to pick the most similar investment to cash – an investment that was the most liquid and ‘cash-like’ in the world – you’d pick three-month U.S. government bonds.

The chances of you not getting your money back on those if you buy at or below face value are tiny, and you’d expect to be paid a sliver of interest, too.

But similar is not the same as identical, and once you get into longer-term bonds the differences are pretty sharp.

Next post: Enough with the self-flagellation: We’ve just lived through a ten-year bear market