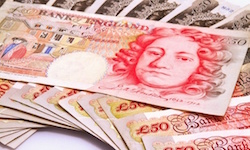 The Financial Services Compensation Scheme (FSCS) has increased the protection it gives you on cash savings that you hold in any bank or building society accounts that it covers.

The compensation limit for deposit protection is now £85,000. The limit for joint accounts is £170,000. These limits were raised at the end of January.

The £1m limit for temporarily high balances is unchanged. (See below for more on this).

What is the FSCS?

The FSCS is a statutory compensation scheme for customers of FCA1 and PRA2 authorised firms. The FSCS is funded by levies raised from such firms.

The deposit protection the FSCS offers is one of the significant benefits of cash for private investors. Everyone should know the details.

The FSCS protects deposits with the vast majority of mainstream current and savings accounts that you’re likely to come across, including virtually3 all those available from the major UK banks or their subsidiaries that are authorized by the PRA or the FRA.

Do make sure you’re covered by the FSCS, don’t just assume it. See the PRA’s website for a full list of regulated firms.

If you hold cash deposits with a financial institutions in excess of the deposit insurance limit, then you’d become a general creditor of that institution in the event that it fails.

For instance, if you have £200,000 in deposits in a sole account with a failed bank then the last £115,000 is not guaranteed and you wouldn’t be able to recover it via the FSCS.

It’s important to note the FSCS guarantees are on a per institution basis. See below.

What is an FCA Authorised Institution? The FSCS compensation limit does not apply to any particular bank, let alone to multiple accounts you may have with the same bank. Rather, it is applied per FCA registration licence number. This is important because banks you perhaps do not realise have anything to do with each other may be owned and operating under the same licence (e.g. Barclays and The Woolwich) while other banks that you know are connected by ownership may actually operate under distinct licences (e.g. Lloyds Bank and Halifax). See Money.co.uk for a list of the different UK firms and the single licences under which they operate. You can also download a list from the PRA.

Spread your cash between accounts to maximise protection

As we’ve said, the FSCS will compensate you for up to £85,000 on cash deposits held with any ‘authorised institution’ in the event of its failure. (I’m ignoring joint accounts here for reasons of simplicity. You can do the maths for homework!)

The total is calculated by adding up all the money you’ve spread across any of that institution’s subsidiary banking brands registered under the same banking licence.

In contrast £90,000 split across two firms with different banking licenses would be covered in full.

Once you have more than £85,000 in cash savings you should therefore open a new bank account with an entirely different qualifying banking group. By saving new cash there you can ensure all your savings are eligible for compensation in the event of a failure.

Remember to consult that list to ensure your money is appropriately diversified.

The FSCS provides a special £1 million protection limit for temporarily high bank balances held with a bank, building society, or credit union if it fails.

This special limit was introduced a couple of years ago as a result of the European Deposit Guarantee Schemes Directive. It offers people with some types of temporary high balances FSCS protection on up to £1 million for up to six months.

If you’d just sold a house, for instance, you might have a temporarily high balance. The temporary protection stops you having to open numerous different bank accounts just to protect your short-term cash hoard.

Confused? Buckle up – it gets worse.

These fluctuations are due to changes in the exchange rate. As the pound has strengthened and then weakened against the euro, the limit was lowered and then raised again.

Some readers might be pleased to learn they can blame Europe for the confusion. Others might blame our vote to Leave. You see, the European Union Deposit Guarantee Schemes Directive fixed a guarantee limit of €100,000 (or the equivalent) across Europe. This means changes in the pound/euro exchange rate makes the UK’s limit more or less attractive, compared with the situation over the Channel.

To address this, the directive requires the UK regulator to review the limit every five years. However it can also move before then if big enough exchange rates shifts warrant it.

And that’s what has happened. Twice. In just a couple of years!

I presume the reason for harmonizing protection is to stop people moving money from one country’s banks to another in a panic.

Such concerns seem finickity in normal times. But the most recent rounds of chaos – the credit crunch of 2008 and the euro crisis of 2012 – should still be fresh enough in our memory for us to see why regulators would seek to curb ‘regulatory arbitrage’ like this.

Nevertheless it is confusing.

At least the FSCS has so far announced the limit changes ahead of time. It does this to give cash fat cats time to move their money around if they need to.

But roughly 95% of people were entirely covered by the lower limit, anyway. Hard as it may be to believe around here, the vast majority of British people have less than £85,000 in savings. (Some 16 million have less than £100.)

Also, the changes are obviously more of an issue when the limit falls than when it rises.

At the new higher £85,000 limit, you’re clearly better protected than before. But when the limit falls – which it could well do again in the next few years – you might suddenly have money at risk of a bank failure. (There’s also been confusion in the past with fixed-term deposits that straddle the change dates.)

Remember that some other very low-risk assets, specifically UK government bonds, have a different risk profile to cash. They won’t be in any immediate danger should a commercial bank go bust.4

Former fund manager and Monevator contributor Lars Kroijer has written about the safety of your cash in the bank. He believes you should assess the credibility of individual banks, even with the FSCS protections in place. Read his piece for more.

Bottom line: If you’re lucky enough to have a lot of cash, pay attention.

I have a dream: One guarantee limit, never changing

It seems sub-optimal to me to chop and change legislation specifically designed to give people confidence in the banking system.

When the guarantee was lowered, I wrote:

I remember the craziness of the last financial crisis, so I do understand the desire for a harmonized protection scheme.

But who is to say the Euro won’t be stronger in six months anyway? Let alone a year or two?

Well here we are just a couple of years later, and the limit has indeed been raised.

True, for most savers there will be no practical difference – the old limit was sufficiently high to cover their deposits and 98% are covered by the new limit. But they will have read a lot potentially confusing stories. Again, not what you want with this sort of scheme.

Ideally anyone in the street could tell you what the compensation limit is. It wouldn’t change from year to year. Maybe once a decade? That’s the way to instill confidence.

I also don’t see why the general deposit compensation limit should be raised, but not the temporary high limit. Obviously very few people will have temporary high balances at any given time, but the principle that justifies the shifting guarantees should still hold.

It’s all a bit silly really. From the UK state’s point of view, this protection is akin to the deterrent affect of nuclear weapons. It’s there but you don’t ever want to use it.

If the FSCS ever has to start bailing out UK High Street banks, we’d be in serious trouble. The state would probably step in, and all bets are off. (In the last financial crisis the UK government even covered private savers with overseas failed banks that weren’t protected, for instance. Next time it could be more or less generous).

What the FSCS is really there to do is stop bank runs, like we saw with Northern Rock in 2007. The fact that it’s there should mean we don’t ever actually use it, because savers know their money is protected. A deposit guarantee scheme is not something that should ever be used in the normal run of things.

I guess there does have to be some limit to the protection. Without it, oligarchs might move billions to UK banks for rock-solid protection. That would represent a huge liability to the state.

But why not protect all savings up to say £1 million? At that point the limit would be irrelevant for virtually everybody – even the vast majority of those with multiple accounts held under the same banking licence.

£1 million is easy to remember, too!

Perhaps Brexit will deliver some stability, although depending on our terms of exit we may seek equivalence with EU legislation, which would leave us where we are today.

In any event, for now £85,000 per authorized institution it is. To be ultra-safe you should probably diversify your cash savings beyond that between different banks as appropriate.

It’s always safest to assume a failure is possible. Even if it’s very unlikely.

Note: This post has been updated, and some older comments below may refer to the previous FSCS compensation limit. Check the date of the comment if you’re confused!