Investor compensation schemes – are you covered?

I got a bit of a shock when researching this post. Like many investors I assumed that if the very worst happened and my investments were stolen away then I’d be protected by the UK Financial Services Compensation Scheme (FSCS) for the first £85,000.

It turns out that ain’t necessarily so.

If you own investments domiciled beyond the UK – say in Ireland or Luxembourg – then the FSCS safety net doesn’t protect you at all. Instead, you may fall under the aegis of a much less generous scheme, and you may not even get that.

Most Exchange Traded Funds (ETFs) available to UK investors – and many index funds – are domiciled in Ireland, so there’s a good chance you don’t have the protection you thought you had.

But before we open that can of vipers, let’s talk through what compensation is available to UK investors and how it works.

Hmm, I was hoping for more

In the same way that UK savers are protected if their bank goes belly up, the FSCS will also bail out UK investors with up to £85,000 if their investments disappear in a puff of fraud, negligence, mismanagement, or mis-selling.

Note, you don’t get £85,000 if you bought shares in a Transylvanian blood bank firm that couldn’t fail and then promptly did. The scheme protects you from institutional risk, not stock market risk.

If your broker / online platform goes under and takes your monies with it, then you can claim for up to £85,000, if there’s no other way to get your money back.

Same again for your fund manager. For example, if Vanguard failed and your money mysteriously vanished, you could be due up to £85,000 compensation in that scenario, too. Vanguard is one of the world’s largest investment firms and it almost certainly won’t go down, but it’s nice to have a cushion.

The important thing to know about the limit is that it counts per institution per person, not per fund. 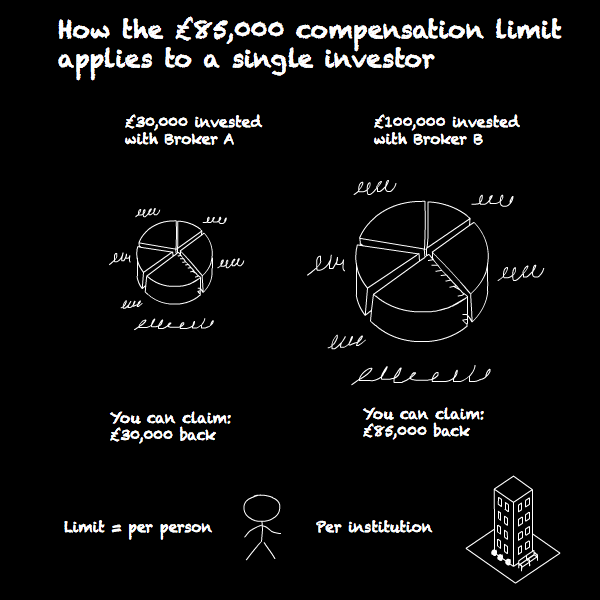 Of course, it shouldn’t come to this. There are regulations in place that require fund managers and brokers to segregate your assets from their own. If the mother company explodes, then your money should be safely ring-fenced in a separate pot and you’ll get it back once the smoke has cleared. The company’s creditors have no legal right to your piece of the pie.

That’s what is meant to happen, but any system can fail.

As with any FCA regulated investment firm in the UK, while it is highly unlikely that Cofunds were to become insolvent, or cease trading and have insufficient assets to meet claims, we can’t provide a 100% guarantee that your money is fully protected.

So the FSCS compensation scheme provides a last resort backstop, in case the next Bernie Madoff happens to be running your brokerage while the cast of Dad’s Army is in charge of administration and oversight.

You’re only covered if the financial firm that pops its clogs is authorised by the UK’s Financial Conduct Authority (FCA).

Note, the word you’re looking for is authorised by the FCA. There’s all kinds of lullaby small print out there that may say the company is regulated by the FCA, but a company can be regulated for many different types of activity. A company must be authorised for compensation to apply.

You can check your broker or fund manager using the FCA’s search engine.

When I checked the Irish spin-offs of BlackRock (AKA iShares) and Vanguard, the note said: Authorised (Schedule 5).

Ah, the ol’ fog of investing befuddlement descends once again!

The FCA’s advice on the relevance of Schedule 5 is:

Consumers considering or currently doing business with an Authorised (Schedule 5) firm, may wish to ask for further information from the firm or its UK branch about its complaints and compensation arrangements. This is because the position may differ compared to a UK authorised firm.

Here’s what Vanguard have to say about their position with the FSCS:

Maybe? What does maybe mean? A clarifying email later and it turns out that ‘maybe’ means that Vanguard Irish domiciled funds and ETFs are not covered by the Irish compensation scheme. The same is also true of State Street’s Irish domiciled SPDR ETFs, and iShares’ and I suspect of most other providers, too.

I recommend you check with your own fund / ETF manager to find out whether you’re covered by any particular compensation regime.

In the meantime, on the off-chance that anyone is covered by the Irish compensation scheme, just how reassuring is it anyway?

The answer is: not very.

Only firms regulated or authorised by the Central Bank of Ireland are covered. You can check who’s who here.

State Street did show up on this list even though they have confirmed to us that their ETFs are not covered by the scheme. Therefore, it’s worth contacting your fund manager directly rather than relying on this list.

Some investors may have ETFs domiciled in Luxembourg. You can find details of the applicable scheme here. It looks similar to the Irish scheme – that is, a €20,000 pay out at best.

The UK FSCS doesn’t cover the Channel Islands or The Isle of Man, either. These are Crown dependencies but are not part of the UK and therefore have their own arrangements.

Some other nuggets to consider.

Your £85,000 UK compensation limit doesn’t interfere with the £85,000 you can claim for lost cash deposits.

If a bank fails while holding your cash on behalf of your broker, then you can claim £85,000 back while still claiming £85,000 elsewhere for missing investments.

However, if your broker money was stashed with a single institution, say Lloyds, and you also had a personal account with those self-same black horsie people then you could only claim up to £85,000 for the two losses combined.

That’s because the limits apply per person, per institution, per claim category (i.e. cash is one category and investments another).

Similarly, if your broker went bust and you had £150,000 invested with it – split 50:50 between iShares and Vanguard – and for some reason your money hadn’t been properly ring-fenced, then you’d still only be able to claim for £85,000. In this case it’s the broker that has failed, not the fund managers, and you only get £85,000 per institution that goes down the Swanee.

Remember there are other regulations in place to ensure that your investments are not bound up with the fate of these institutions. It’s unlikely that they’ll fail and leave you with absolutely nothing.

If you decide to diversify your money between brokers, then check they are not part of the same financial group. iWeb, Lloyds and Halifax / Bank Of Scotland Share Dealing are in the same group, for example. In other words, they count as the same institution and you’d only be eligible for £85,000 even if you diligently split your assets across them all. Again you can check this using the FCA’s search engine. Search by your broker’s name at the top of the web page. The search will then show a trading/brand names column that’ll show you who’s who.

Building a stakeholder pension, SIPP, or workplace defined contribution scheme? Then £85,000 is your lot, per institution, as above.

Defined benefit pensions have their own rules that you can enjoy here.

A little known benefit of annuities is that your income is protected up to 100%, with no upper limit on the amount.

Claims can take a long time to recover your cash – six months or more. Don’t put all your eggs in one basket if you’re likely to need the money in a timely fashion, even if your funds are well under the limit.

Schemes are paid for by a levy on the financial firms covered. If you want to launch a campaign to argue that the compensation limits should be higher, then rest assured the industry will claw back the cost from all of us.

This piece is meant to inform not alarm. It’s worth reiterating that the chances of an unrecoverable failure are very low. However, the risk is not zero, so the answer – as in most things, except husbands and wives – is diversification.

I’m not suggesting that you choose another broker or fund manager every time you breach the £85,000 limit, but perhaps think twice about those nice offers to ‘consolidate’ all your investments in one, convenient place.

How many ways you slice your pie will depend on how much fragmentation you can handle and how comfortable you are with the thought of a black swan sailing merrily through all the fail-safes.

Remember there are no absolute guarantees out there, despite all the internet jousting that goes on about Crest and certificates of ownership locked in fireproof boxes.

And whatever you do, don’t let stress about compensation schemes derail your main aims. My Irish domiciled funds aren’t covered but I’m not going to sell a single one. What I will do is diversify among more fund managers over time.

Far better to diversify across asset classes to protect yourself against a probable risk than to live in fear of the improbable.

Next post: Review: How To Make A Million – Slowly, by John Lee