Eat The Rich or die trying (a review, of sorts) 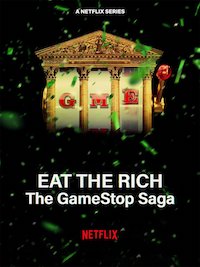 I watched the new three-part Netflix documentary Eat The Rich this week. And I got nostalgic for an experience I took almost no part in.

The documentary centers on GameStop’s brief life as a meme stock, culminating in the short squeeze in January 2021 that sent its price parabolic.

Fortunes were made and lost in a day. At least on a mobile screen.

Eat The Rich presents a comprehensive Big Short-flavoured overview of the whole saga. The run-up, the peak, and the party-pooping aftermath.

We see the perspective of all the key players, too, although only a couple of Wall Street pros took part.

I knew the pandemic lockdown trading boom was big at the time. But only really because I saw its impact on several listed companies I follow, like Hargreaves Lansdown.

I’d also laughed along with the memes and the lingo. Stonks, diamond hands, HODL, and all the rest. But again, only when it bled on to Twitter or the blogs.

I imagine 20 years ago I would have been in the thick of it. Time flies, and investing bulletin board posters become old bloggers.

Maybe that’s why even though my sole, tiny contribution to the drama was to urge GameStop traders to dump their shares if they still owned them – just before the peak as it happens – I was a bit sad to have missed the craziness.

Perhaps not what you’d expect from a website about sensible investing?

True, I’m the naughty active one in these parts.

Yet by its end the meme stock frenzy had almost nothing to do with the ‘proper’ investing principles that relics like me employ. Not for 99% of the participants, anyway.

It probably had more in common with a riot.

There was a similar energy and even a (fickle) camaraderie that was intoxicating.

Chasing meme stocks and bragging about your blowups on Wall Street Bets is about as far from passive investing via index funds as you could imagine.

It’s very bad for your wealth. It also appears to have been a hoot.

Down and out in London and Wall Street

I don’t want to imply that my tracker-philic co-blogger The Accumulator doesn’t know how to have a good time.

You’d better hope you’re not nearby when he discovers an ETF with a 0.04% lower ongoing charge figure. Something is liable to get broken in the celebrations.

But let’s face it, passive investing is mostly boring and it even feels wrong. We do it because it’s the best way to secure long-term wealth. It will never inspire a movie.

In contrast even when they’re losing money, the Reddit traders make a show of it.

Yet – albeit in their scabrous and hilarious way – the comments that followed on Reddit are overwhelmingly supportive.

The community understands the desire to gamble all on escaping from corporate life. Not the slow and steady way we do it, but ultra-speedily.

And for a few brief months in the midst of the lockdowns and at the height of a speculative bubble, it was possible. For a lucky few, anyway. All from making highly-levered bets on a free share trading app.

Many people did achieve life-changing wealth – at least for a while. A minority may even have got out before the implosion.

But as a counterpoint, the best comment for Monevator purposes is buried deep in that thread above:

‘Impressive’ in a Wall Street Bets context hails the seeming immolation of yet more of this trader’s money.

However in this case, his retirement funds were tucked safely away in trackers.

And there the bear market that we boring sensible investors have bewailed has been – relatively-speaking – a life-saver for the down-and-out Reddit day trader.

There’s a lesson in that. But the Monevator audience is not really the one that needs to hear it.

So long and thanks for all the memes

While Wall Street Bets lives on, meme stock mania for now is in the 2021 history books. (Along with a lot of other weird stuff from that year.)

Nearly all the runners and riders long ago saw their share prices crash back to reality.

And you’d at least that hope the extremely over-sized yet complacently held professional short positions that made GameStop’s price gains so explosive – and blew up at least one hedge fund – are in the dustbin of posterity, too.

But even so, it won’t be the last time a collective trading mania takes over the markets.

We’re all still getting more connected, not less. And the greed, desperation, or economic injustices that motivated so many into recklessness have hardly gone away.

The same forces of social media and virality have also driven changes at the business end of investing.

For example, a plethora of baby venture capital start-ups were founded during the boom on the back of podcasts and newsletters. It’s yet another way of using the distribution superpower of the Internet to pool capital.

You even see viral mobs at work with reviews for Eat The Rich on Rotten Tomatoes.

Critics love the series. However the audience says it’s diabolical. Presumably the Reddit faithful disapprove of the filmmaker’s even-handed approach and so they have voted it down en masse.

Similar ‘review bombing’ was seen a few weeks ago with Amazon’s Rings of Power spin-off. It undermines the legitimacy of what we once called user-generated content – which was meant to be a special forte of the Internet era.

One by one our vanities are blowing up.

The very low audience rating for Eat The Rich seems unfair to me.

But perhaps trying to tell the whole story fairly only guaranteed it would equally piss off everyone.

We live in an age where you must be either for or against something. Even-handedness is a weakness. There are no shades of grey.

Indeed the same wicked social media dynamics that made meme stock trading so potent we also see in everything from domestic politics to the culture wars to calls for a nuclear confrontation with Russia.

Experts are, famously, out. Reducing complicated positions to a mouse click – a like or a cancellation – is the order of the day.

That’s how the Conservative Party ends up voting against the guy who tried to admit to the fragile economic situation we’re in – and instead for the woman who just said she’ll fix it, the way you used to bang on a TV to get the picture working again.

Fewer people seem prepared to take the difficult path. Whether it be analyzing a company’s accounts or a politician’s pitch.

One week a deeply troubled computer game retailer’s valuation rockets from $2bn to $24bn then straight back down again.

Another week the gilt market blows up.

It’s almost like the experts were on to something.

Being old-fashioned though, I thought the documentary did a good job of covering the GameStop story from different perspectives.

In Eat The Rich we see hedge fund managers as over-paid and self-regarding economic vandals. But we’re also reminded that they’re stewards of the capital of pension funds and university endowments.

The Reddit day traders are portrayed as self-reliant iconoclasts but also, at points, as clueless dummies.

Lawmakers and regulators are simultaneously asleep at the wheel, in cahoots with Big Finance, and sympathetic to claims the capital markets have been ‘rigged’ against the little guy.

Oh and they’re also clueless dummies. (Everyone gets that treatment.)

Sensible observers know all these things can be true at different times.

Yet it’s also indicative of yet another facet of modern life. Our implicit trust in the structures surrounding us really does seem to be breaking down.

Very few celebrate bankers as The Masters of the Universe these days. Not many more would raise a glass even for captains of industry.

Like everyone involved in investing – apparently – they’re all said to be out only for themselves, one way or another.

Even you sensible investors who find a spiritual home at Monevator should get used to being called names.

Sometimes we’re the strivers, responsibly taking control of our financial futures. Giving up hedonistic pleasure today to ensure we’re not a burden in our old age.

Other times though, we’re layabout rentiers making money off the labour of others. Which makes us fair game for windfall taxes on our firms and higher rates on our dividends and other profits.

Which is it? Are investors part of the solution, or does society believe we’re actually a problem?

Eat the rich, the poor can have cake

If a pundit or politician wants to make the case for nationalizing the utilities or the railroads, then the dividends legitimately paid out to shareholders or pension funds are a green light to confiscate their gains.

On another day, when it’s time to encourage people to invest in start-ups or to make more capital available to growing companies, then the government courts investors with warm words and even special vehicles like ISAs or VCTs.

It used to be that different parties might hold these different views.

Now it’s as likely to be the same politician on a different day.

It’s hard not to get cynical. But there’s an even bigger problem.

As I suggested last weekend, it all reveals a society that is deeply uncomfortable with the capitalism that has facilitated much of the societal richness we see around us. From infrastructure to state pensions.

Perhaps we feel we can afford to be cavalier about capitalism, snug in the bounty it has provided. There’s surely some truth in that.

But I believe people are also distrustful because they believe that capitalism betrayed them. Most clearly with the financial crisis of 2007 and 2008 that animated the meme stock traders. But also with the steady rise of inequality at the high-end, and the winner-takes-most dynamics of the Internet era.

It is a dangerous direction of travel. As I wrote back in 2012:

I believe it’s a responsibility of all of us who support free markets – let alone those of us who hope to profit from them via investing – to stand up and be counted, and to be sure we can justify any aspect of the system that we defend, rather than indulging in fantasy politics of any persuasion.

I hope we do not come to regret not doing more to defend capitalism – including from itself.

Because while the tools of investing – from cheap tracker funds to free share trading to abundant information – have only gotten better, the image of investing in most people’s eyes has not.

That’s how you end up with a public that can call for windfall taxes without wondering how and where their pensions are invested.

And it’s how smart young people who two decades ago might have been reading Warren Buffett and preaching capitalism as a force for good end up believing that by rallying together via a trading app they were going to smash the system.