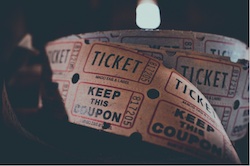 This review of the best FIRE films is by The Mr & Mrs from Team Monevator.

Beneath my article (writes The Mrs) about owning a dog while pursuing FIRE1, Monevator reader TahiPanasDua commented:

“This seems like a radical departure from the boring old Monevator diet of investment. Maybe now we can have regular sport, menswear, and film review articles.”

Well, sport and menswear are not our thing – but films? You bet!

The Mr: They’re more The Mrs’ chosen specialised subject for Mastermind than mine. But like a lot of families we watched far more films in 2020 and 2021 than in previous years, so we’re all film experts now…

So I got to thinking: what films most ably represent and reflect on the concept of financial independence?

The best FIRE films would:

Alas these ingredients are hardly the stuff of on-screen drama. It takes real skill to make opening a high interest bank account look exciting, compared to choreographing a bank heist.

We’re not looking for the films about the world of high finance here either. So no battling moguls or city slickers…

The Mr: …although Wall Street, The Big Short, and Margin Call are all terrific.

Despite these constraints, me and The Mr have come up with seven films worth busting out the popcorn for, and that we also believe impart some useful wisdom.

Below, The Mr will run through our nominated best FIRE films. They’re all great viewing and offer contrasting takes on financial independence.

Warning! There will be spoilers. But it’s best to know what you’re getting into before you begin to pursue financial independence, right?

Afterwards you can vote for your favourite. Additional nominations are welcome in the comments. Maybe they’ll make our shortlist in the future.

To our knowledge, the only serious documentary about the FIRE movement. This film follows a couple at the start of their journey and was instrumental in getting us started. Lots of ideas and stories about the ups and downs it brings, and cameos from some big names – Mr Money Mustache, The Mad Fientist, Vicki Robin, the Minimalists, and more. It’s a North American perspective, but that largely reflects the movement so far.

A subversive take on financial independence. The wealthiest character is the villainous Henry Potter. Our hero, George Bailey, in contrast hits middle age with no savings or investments of any sort. He faces bankruptcy and is contemplating suicide. But the story reveals that throughout his life, George ‘invested’ in other people and in his relationships. And these people are spontaneously willing to donate the money he needs, leading his brother Harry to describe him as “the richest man in town”. It’s a crude parable. But the point is financial investment should not crowd out the investments we make in each other. Those are ultimately far more valuable.

In some ways Will, the central character, is an inversion of George in It’s A Wonderful Life. Will has financial independence – he inherited royalties from a song his father wrote – and never needed to work. He’s got money, looks, and charm but as a friend says to him, “What is the point of your life?” The story is about how he finds one. Yes, it’s a rom com with a redemption narrative, but nothing like as cheesy and predictable as it might have been. About A Boy shows that other people are liable to mess up our plans, financial or otherwise. That’s kind of the point.

A film about what motivates financial independence and what it can and can’t bring you. We never learn the source of Gatsby’s wealth, but he appears to be a talented young man who built a business empire from scratch. It seems like Gatsby is now dissipating his wealth on parties and exceeding his safe withdrawal rate. (Indeed one pundit calculated Gatsby is likely in debt.) But he is actually spending his money very deliberately to try to achieve the one thing he wants – a woman called Daisy – that he cannot have. We might ask what drives our desire for financial independence? And are we realistic about what it will mean if and when we get there?

From our perspective, the most interesting character is George Banks, who works steadily at the Fidelity Fiduciary Bank. A sober man of regular habits, Banks is no doubt prudently saving a lot of his income, although economies could be made (all those chimney sweeps!) But things come to a head when he is sacked and faces a bleak future. Banks puts a brave face on it and fixes his children’s kite, but if he had pursued financial independence he’d have had fewer worries. He may not then have needed the plot device of a vacancy for a partner to rescue him – and also spent more time with his children. Bonus points for the best explanation of a bank run ever seen on film.

You may know The Minimalists. In fact they might be the biggest celebrities of the intentional lifestyle. (Celebrities with a difference – if you don’t open their emails they will remove you from their list, because they don’t want to clutter your inbox.) This surprisingly hard-hitting documentary reveals the difficult upbringings of Joshua and Ryan, who responded by becoming high-earning, high-consuming execs before it all fell apart and they discovered minimalist living. There’s plenty of motivation and practical tips based on their key message: “Love people. Use things. The opposite never works.”

We’re cheating a little – The Good Life is a TV series. But has there ever been such a funny, charming, and at times moving portrayal of thrifty living, in any medium? Tom and Barbara aim to achieve financial independence by growing their own produce rather than their investments. Nevertheless many of the steps they take will be familiar to those on the path to FIRE. The couple enjoy a fun, fulfilling, and exciting life without new clothes, trips, meals out, and all the rest of it. That contrasts with their best friends and neighbours, Jerry and Margot, who consume in a way that was only just becoming possible for the middle-classes in the 1970s. Which of us hasn’t looked on at such friends and neighbours with envy at times? But ultimately whose lifestyle would we really prefer?

Vote for your best of our best FIRE films

Seen them all? Now it’s time to choose a winner in our poll below:

This poll is no longer accepting votes

Thanks! The Investor will announce the winner in his Weekend Reading article on Friday.

And again, please let us know in the comments what you think of our picks, and whether there are other FIRE films you’d nominate instead.

See all The Mr & Mrs’ articles in their dedicated archive.

Next post: Will you spend less as you age? The case against