Will you spend less as you age? The case against

Evidence is mounting that retirees spend less as they age, on average. The theory is that infirmity and uncertainty about the future erode people’s ability and desire to spend money on non-essentials.

Instead they accumulate savings. That’s even though most retirees do not experience a spike in healthcare costs towards the end of their lives.

The very first paper on the topic was published in 1998. It used British data but the pattern has been found in multiple countries in the decades since.

I have a question

We explored the evidence for the real-terms retirement spending decline in the UK and what might drive it in last week’s post.

My outstanding questions were: 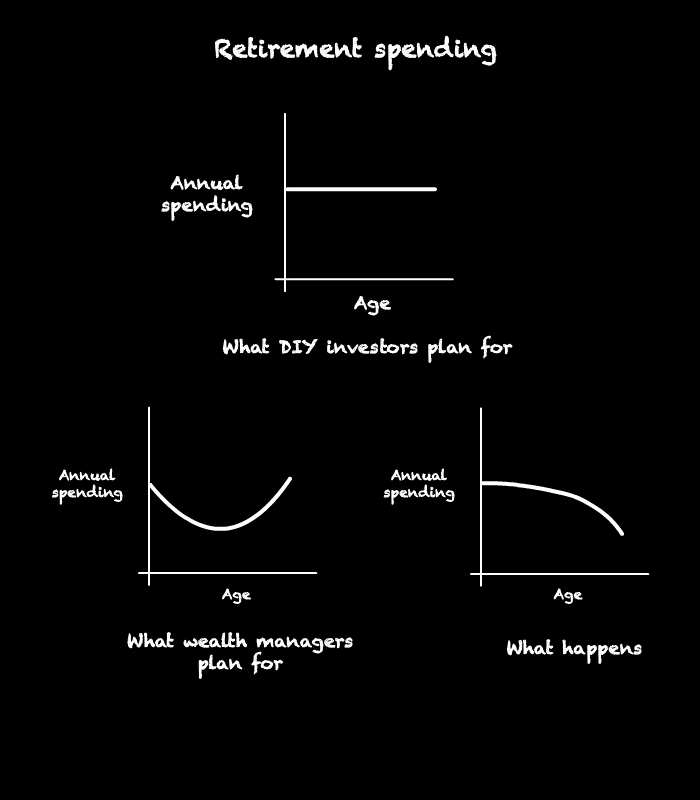 The Precautionary Principle suggests we should plan to do worse than typical when it comes to our own health. Because how do we know we won’t be whacked by huge long-term care bills in the future?

Let’s make like rational sceptics and examine the case against doing anything at all.

Why retirement spending research may not apply to you

The authors say about the consumption decline in later life:

We should stress that this is an average, which, by definition, will mean that some individuals will not experience stable patterns of expenditure on essential items.

But not everyone can control their spending. The report reveals that nearly a quarter of 60-year-olds and older spend more than they earn.

Even one in seven of the 80-plus age group spends more than their income.

You could argue the overspend odds must be lower for the money mavens who read Monevator. Our readership is dominated by financially literate types who plan for the future.

But like a budget version of the Anthropomorphic Principle, your part of the universe is likely to have special properties simply because you’re interested in the topic of retirement spending.

The academics must measure broader patterns.

It could be you

Brancati’s data can’t tell you anything about whether you’ll draw unlucky numbers in the UK’s long-term care lottery yourself.

And by her own admission, the data is understandably limited in other ways:

At this point it should be noted that our data is restricted to households only and therefore excludes those actively living in care homes who may be paying for it from their remaining assets.

Only 6.4% of households from the 80-plus age group bore the burden of long-term care costs.

We can assume this data captures some people who live in care homes but don’t represent their entire household. Similarly, the percentages must miss some households that exist entirely in care homes.

Brancati believes the lack of exploding healthcare expenditures in her data means a U-shaped retirement consumption curve is atypical.

Obviously that’s not the same as saying it won’t happen to some individuals.

U-shaped consumption The U-shaped spending curve was posited in US research by David Blanchett. He found that real-terms spending headed down post-retirement but rebounded towards the end as health costs mount. (The upward leg of the U-consumption curve). But Blanchett concluded the net effect is still a decline in overall retirement spending.

Brancati’s data is a snapshot of UK spending and lifestyle factors from 2003 to 2013.

Your eighties may be three years away or 50. Will an aging population and shrinking workforce increase healthcare costs for the retirees of the future?

It seems a fair assumption.

And that leads us to another reason to be cautious about this research.

For example, the consumption curve in 2013 compares that year’s 65-year olds versus 75-year-olds versus 85-year-olds.

That’s important, because each cohort is subject to a unique lifetime of socio-economic pressures.

The habits – and savings accounts – of today’s 85-year-olds are shaped by their prior experience. Those influences are materially different from previous generations at the same age.

For example, a cohort that experiences high healthcare inflation could well face higher costs in that area than previous cohorts at similar ages.

Each generation faces different financial conditions, which can alter their retirement path:

Who knows how this shakes out? But fluctuations in fortune could mean a majority will not always experience falling retirement consumption.

And that leads to inconsistent outcomes across the literature (although the overall trend is still convincing).

For example, Brancati finds that 77% of older households save something.

In contrast, according to retirement professor Wade Pfau’s analysis of a US paper1 only 39% of retirees see falling consumption.

It is clear that retirees save to hedge against an uncertain future. And Brancati gives good advice when she endorses that behaviour as rational:

…people may live longer than they expect, investments may generate exceptionally low (or high) returns, and prices on certain goods and services may unexpectedly rise.

For this reason, prudent individuals may set aside a certain amount of wealth to avoid running out of cash in case of unexpected expenditures.

Brancati makes further suggestions for retirees likely to spend less as they age:

For those with small DC [Defined Contribution] pots and little else, they might best use their DC savings to give them some flexibility early on in retirement and rely on pensioner benefits to meet essential spending needs later on.

It may make sense for financial products and services to facilitate relatively high initial income before guaranteeing a base level of income in later life as people reduce expenditure on non-essential items but maintain spending on essential every-day items.

One way to simulate this last idea is to use a slightly higher sustainable withdrawal rate (SWR) at the outset. You could then make the most of any spending decline by buying an annuity very late in life with your evaporating resources.

A level annuity bought in your late seventies or early eighties could hit the sweet spot between fading life expectancy and below-inflation consumption.

Meanwhile Pfau advocates puzzling out your potential exposure to the trend but then treading warily:

…those who plan for greater expenses related to travel, housing, or health care should expect their spending needs to keep pace with inflation.

Spending may decline, so I would not fault anyone for using assumptions of gradual real spending declines such as 10% or even 20% over the retirement period.

But pending further research developments, I would avoid moving too far in the reduced spending direction as a baseline assumption.

Consuming less than you earn in retirement leads to a higher SWR than if you assume constant inflation-adjusted spending.

The US sultans of SWR, Wade Pfau and Michael Kitces, have published pieces estimating the SWR bonus you may collect if your spending declines.

Theoretically, you can spend more at the start of retirement because your consumption will tail off later. That offsets the risk of running out of money.

Caveat 1
The SWR estimates vary wildly. They make different assumptions about the rate of decline, asset allocations, and more. They all use US returns and assume you don’t retire until age 65.

Caveat 2
FIRE-ees beware that SWR bonuses attenuate due to your longer retirement. The retirement spending decline doesn’t really pick up speed until age 70 to 74. There’s plenty of time for you to sink your portfolio before then, especially given a bad sequence of returns.

Still, for the brave or foolhardy:

I must admit I ignored the ‘declining retirement spend’ evidence during my own FIRE planning. Neither did I make any special provision for long-term care bills – other than owning a house.

I think the research has important insights on our likely path through retirement. But I also believe it’s too risky to apply on an individual basis.

Retirement planning is dicey enough without trying to optimise yet another personal unknown.

But I do feel more secure about our finances – and better informed about the choices we face – now I’ve taken a deeper dive into the topic.

I prefer to think of falling retirement consumption as another reason why my chosen SWR is probably okay.