Book Review: Beyond The 4% Rule by Abraham Okusanya 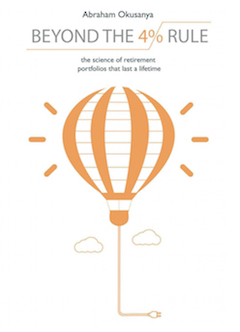 The tactics you use to accumulate your retirement pot just won’t do when you throw the whole system into reverse and start spending those savings.

That’s a message that’s been slow to spread but is picking up speed now that the discipline of retirement research is moving out of academic journals and into Amazon books – placing more powerful retirement strategies into the hands of DIY investors like us.

The running has been made by US pioneers so far, but the good news is that we finally have our own Made In Britain take on retirement.

Abraham Okusanya is a UK-based retirement researcher and fintech entrepreneur and his book, Beyond The 4% Rule, should be required reading for any prospective UK retiree who won’t be relaxing in a hammock woven from secure Defined Benefit pension.

When you need a strategy to last you the rest of your life, it’s a good idea to make sure that the American prescriptions travel well.

Beyond The 4% Rule marshals plenty of evidence to show that the US experience does translate but needs localisation. Okusanya shows the way – bounding as nimbly as a mountain goat across the deceptive slopes of retirement investing. He writes with a smile too, which is a welcome change from the dry-as-sticks tone that characterises most work in the field.

As the pages breeze by, you’ll find yourself covering:

If all this is unfamiliar ground, you will find it relatively easy going with Okusanya as your guide. He makes light work of it – but that also means he takes some shortcuts.

In my opinion, Beyond The 4% Rule stumbles in a couple of important areas where it would be better not to rush.

Okusanya replicates US withdrawal rate research by replacing historical US data with UK numbers. He doesn’t offer guidance as to how relevant historical UK returns are for contemporary retirees. We’d argue that in these days of globally diversified portfolios, UK data alone is not the best foundation for withdrawal rate assumptions.

Okusanya’s numbers show that the UK portfolio has the higher SWR in the historical worst case. It also bests the global portfolio’s SWR 58% of the time between 1900 and 2016.

You’d be forgiven for thinking: “Well, it’s a UK-only portfolio for me, then – what a turn up!”

It is indeed a turn up. The renowned US retirement researcher, Wade Pfau, who has led the way on international withdrawal rates, came to a different conclusion. The global portfolio’s SWR beat the plucky UK 78% of the time between 1900 and 2012, according to Pfau. It also delivered a higher SWR than the UK portfolio in the worst case scenario.

I’m not saying Okusanya’s numbers are wrong. It takes only a different dataset or different assumptions to change the result. They could both be right! Precision is a myth in retirement investing.

But Okusanya errs, I believe, in presenting his research in a way that could lead investors to concentrate their portfolio in UK assets and ditch global diversification.

It’s not as if Okusanya is unaware of the Pfau findings. The key paper appears in the reference section of the book. His analysis could have been expanded to explain that the UK’s actual historical path was only one of many that might have been taken – as the fate of other developed countries shows. He might have explained that the historical returns are uncertain that far back, and that small input changes can create different results.

Okusanya does admit that the global portfolio’s worst case scenarios are largely caused by the catastrophic impact of World War One on the countries that bore the brunt. But he goes on to state that the evidence suggests the UK portfolio is better in extreme conditions.

This seems a bad case of projecting past performance into the future. We have no reason to believe that the UK could not be on the losing side in a major future conflict. Or it could be a ruined winner – as was Belgium after World War One.

Even US researchers such as Pfau think that US retirees should base future plans on the global dataset rather than expect their country’s 20th Century luck to hold.

To be fair, Okusanya doesn’t unequivocally back the UK portfolio. He makes a brief case for a global allocation based on volatility. But he’s vague and readers could use stronger guidance to interpret his evidence.

A lack of rigour also undermines the section on asset allocation between UK equities and bonds. Okusanya shows that a 100% UK equity portfolio delivered the best SWR across the board for a 30-year retirement. Yet Pfau has shown that optimal asset allocations are all over the map for different developed countries.

Drawing firm conclusions from a single dataset is a risk for retirees. Michael McClung was careful to use out-of-sample data to test his findings in his retirement investing book Living Off Your Money. Okusanya skips the nuance.

Thanks for the tip on Beyond the 4% Rule. Just bought it: hopes it helps in my quixotic quest for an easy answer!

Beyond The 4% Rule does not provide our easy answer. But in truth that’s because there are no easy answers for DIY retirees.

Despite its flaws I unequivocally recommend Beyond The 4% Rule. If you don’t know much about deaccumulation it’s a great introduction. There’s plenty of gold here for the more knowledgeable, too.

Okusanya brilliantly re-frames retirement failure not as the threat of running out of money but as the chance that you’ll need to lower your spending at some point. Combine that with his probability section showing that the odds of your nightmare scenario materialising and you living long enough to see it are pretty low, and suddenly the case for a bombproof SWR comes apart. If this convinces you to lower your demands from 100% historical success to 90%, then you can treat yourself to a nice SWR uptick.

There’s also a handy section at the end that shows how you can tweak your SWR in tune with various ‘Beyond the 4% rule’ factors you can bake into your plan. You add SWR points for positives like variable withdrawal strategies and subtract points for negatives like fees.

Again though, Okusanya’s version is infuriatingly incomplete and light on caveats, compared to similar work by the likes of Michael Kitces. FIRE devotees will also be disappointed by the book’s omission of time horizons beyond the standard 30 year, retire-at-65 game plan.

All of which serves to illustrate that while you could put a plan together from Beyond The 4% Rule, you probably shouldn’t. It’s better to use it as a gateway to more knowledge. The Kindle version enables you to click through immediately to the fantastic body of research – including UK sources – that Okusanya references. You can then follow up your reading with Michael McClung’s Living Off Your Money and Wade Pfau’s How Much Can I Spend In Retirement?

You can also check out the free chapter of Beyond The 4% Rule and read Okusanya’s blog.

Like the 4% rule itself, Okusanya’s book is an excellent contribution to our understanding of retirement investing.

But it’s not the easy answer. There isn’t one.

Next post: Could global prime property be the canary in the goldmine?