Could global prime property be the canary in the goldmine? 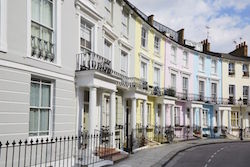 Prices for prime properties in some global cities are softening. Commentators tend to put their weak local market down to local conditions – tweaked tax laws, or regional political concerns – but are they missing the big picture?

Bears have lost – or at least not made – untold billions by betting on the end of the bubbly market for assets we’ve seen since the boom began in 2009.

And I’ve been pretty optimistic throughout what’s still being called a “recovery”.

But nothing lasts forever.

Crucially, US interest rates are already well off the bottom.

Continuing low rates in Europe, Japan, and the UK curb will restrict how fast and how far US market interest rates will go. Perhaps the US President will too, with his random Tweets driving fearful money back into Treasury bonds, in turn pushing yields back down.

But with North America’s unemployment now very low and its economy boosted by a late-cycle tax-cut bonanza, it’s hard to see why the Federal Reserve won’t continue to hike its benchmark interest rates in the months and years ahead – a complete contrast to the easy money regime that has prevailed since 2009.

The end to that near-limitless cheap money will surely be felt around the world, one way or another, in time.

Is prime property already rolling over?

The Financial Times has detailed how global cities have boomed since the crash:

Over the past 10 years, the life-cycles of global cities such as London, New York and Sydney start to look very similar.

They begin with central banks cutting rates; then foreign buyers are welcomed in, prices go up, high-end homes are built, capital appreciation drops and then cities are left with a lot of stock which is too expensive to sell.

The FT also featured a snapshot of how the cream of the global cities had prospered over the past decade: 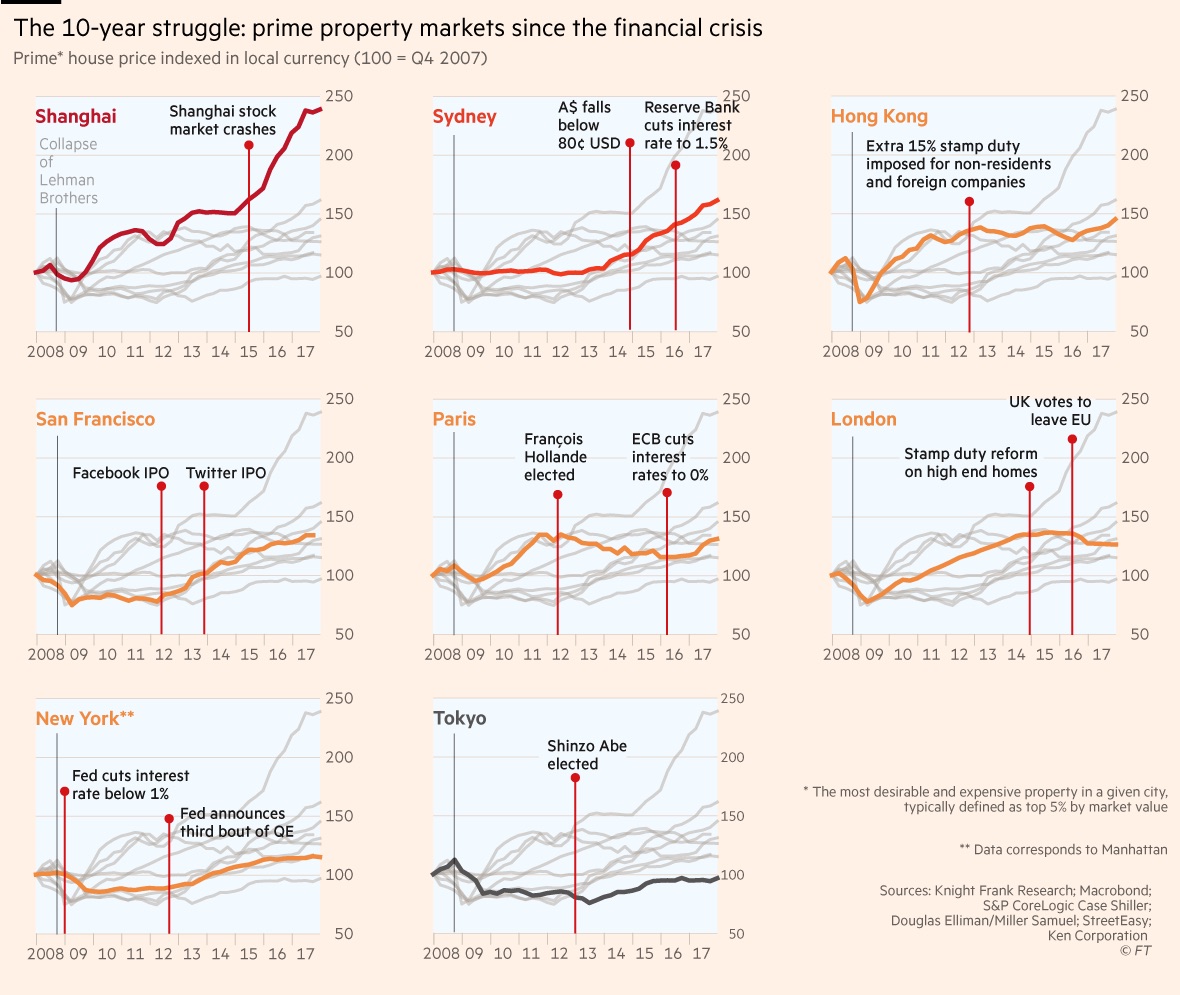 True, most of these cities had seen high house prices long before the financial crisis.

But few (if any) pundits predicted the house price growth we’ve seen in these global cities in the subsequent 10 years.

The financial crisis involved an excess of debt and speculation in property – albeit more sub-prime properties than Manhattan penthouses.

Property therefore didn’t seem the obvious place to look for a new boom.

But in retrospect, it looks obvious what happened.

By successfully (re)inflating asset prices, quantitative easing (QE) made the rich, richer. And the rich tend to live in global cities.

In the fearful years that followed the near-collapse of the financial system, few wealthy people fancied a move to a far-flung rural town…

The FT article explains this dynamic in the context of London.

Waves of capital washed into London’s housing market – first from bog standard rich people seeking safety, then from sovereign wealth funds lured in by the fall in the pound, then Russian and Middle Eastern investors fearful of disruption in their part of the world, and finally with a wall of money from Asia.

When did this start to reverse?

The collapse in commodity prices in 2014 didn’t help. That squished the spending power of Russian oligarchs and Middle Eastern royalty.

The price of visas were raised. From April 2015, tougher anti-money laundering measures were introduced, too.

All told, the Home Office recorded an 80% fall in the number of foreign investors moving to Britain in the year to 2016.

Then there’s the ugly white elephant – Brexit – which has turned UK assets into the most unloved in the world for global fund managers.

The result? A malaise that has spread beyond Mayfair and Belgravia. London house prices just posted their first annual fall since 2009.

The FT argues London property simply got too expensive. And sure, if London homes were cheaper then perhaps they could have shrugged off some of these headwinds.

Stamp duty might never have been raised so high if the Government hadn’t seen a cash cow to be milked, too. There’s an element of reflexivity to this.

But look at other big global cities. Many of those also seem to be losing their footing. Can it be a coincidence?

Let’s whip around the world, montage-style:

Cracks are showing in the Sydney property market, with prices now falling for the first time over a 12-month period since the boom began.

Manhattan real estate sales and prices took a fall in the fourth quarter, and they’re likely to slide even further this year after the new tax rules take effect.

Total sales volume fell 12 percent compared with the fourth quarter of last year — the lowest quarterly level in six years, according to a report from Douglas Elliman Real Estate and Miller Samuel, the appraisal firm.

The average sales price in Manhattan fell below $2 million for the first time in nearly two years.

Out of the 70 cities tracked, prices dropped in 16 cities month on month including first-tier cities Beijing, Shanghai, Guangzhou and Shenzhen.

It was these top-tier cities which saw the most significant decline in prices.

Shenzhen had its biggest drop in three quarters as prices slid 0.6 percent from the previous year. Prices fell 0.4 percent in Guangzhou, 0.3 percent in Beijing and 0.2 percent in Shanghai, compared to the same period last year.

Granted, these are tiny falls so far. Not much more than noise.

It’s also not universal – Paris and Singapore for example appear to be bucking the trend. Perhaps it’s because they missed out on the prior boom, but anyway if some global cities continue to do well it does slightly scupper my thesis that cheap money is beginning to ebb away, exposing the priciest assets.

Perhaps it is just a matter of froth being blown off. The masses had their Bitcoin frenzy in late 2017. Maybe global property was the same mania for the 1%.

Yet it’s still odd to see prime property falling even as the global economy does better than it has done for years.

Property is typically a lagging indicator, not a leading indicator like the stock market. House prices tend to react, rather than predict.

But when it comes to the end of super low interest rates, perhaps prime property does have something to say about the future?

Prime property is very often bought with cash, not a mortgage. To some extent that might soften the link between property prices and rates – certainly compared to the mass market.

However investment is everywhere and always a relative game.

If the rich can now get nearly 3% from a ten-year US government bond, maybe they no longer want to bother with taxes, estate agents, and getting the windows cleaned twice a month?

It will be interesting to see who reaches a similar conclusion next. The share prices of so-called ‘bond proxies’ like consumer goods giants have already softened a little, but they could have much further to fall if investor appetites truly change, for instance.

In contrast, maybe the cheap-ish, cheer-less UK stock market might finally get some love, stuffed as it is with cyclical miners and banks.

Your next local house price crash: Made in China?

I began writing this article in the snowy miserableness of March, but got distracted by new flat nonsense and never finished it.

And that’s convenient, because this month the IMF came out with research stating that global cities are indeed increasingly moving in sync.

In its latest Global Financial Stability report it found:

…an increase in house price synchronization, on balance, for 40 advanced and emerging market economies and 44 major cities.

Moreover, cities in advanced economies may be particularly exposed to global financial conditions, perhaps because they are integrated with global financial markets or are attractive to global investors searching for yield or safe assets.

I have no firm conclusions to draw about all this right now. My track record of predicting property prices is poor!

Also, before anyone (rightly) pipes up and says that potential house price falls in New York shouldn’t derail your passive investing strategy – I obviously fully agree.

This post is filed in the Commentary section. Most readers own property, too, so the asset class is hardly irrelevant. But acting on the end of the QE-era should probably be left to those of us silly enough to muck about in active investing waters.

To that end, I am Watching This Space.

One of the (less important) reasons why I finally bought a flat in London this year was I could see the market was soggy, and I put much of that down to Brexit uncertainty. Given that Brexit uncertainty should pass, one way or another, it seemed a potentially opportune window to buy.

But synchronized falls for global property could indicate I was mistaken about the role of Brexit. Perhaps the property cycle has turned. We’ll see!

Next post: Weekend reading: Savers appeal to the opposite sex

Previous post: Book Review: Beyond The 4% Rule by Abraham Okusanya