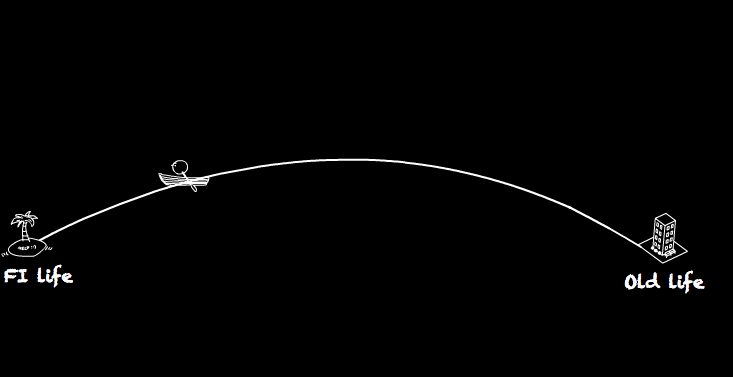 It’s been nearly three years since I last talked about financial independence (FI). I’ve been keeping my head down because The Investor threatened to send the boys round to give me a lesson in volatility if I missed another Monevator: The Book deadline.

I was three years into a ten-year FI journey and feeling the pain. The launch party excitement lay in the past. The reality had become an endless trudge through mental Siberia.

The FI dream feels real. The way ahead looks like a downward glide. Is it me, or are those milestones spaced a little closer together now?

I can report that:

The mechanics work. The rest is down to the human.

Now I can sense freedom on the wind, I’m as happy as a Bisto Kid floating on gravy.

I’ve stopped worrying about the process. Frugal living is not a chore anymore. Mrs Accumulator and I have absorbed it into our systems like friendly bacteria.

But we’ve also lowered our optimisation guns. We weren’t going to last ten years – much less the rest of our lives – if we pinched every penny.

That amounts to £22,515 in 2018 according to the Bank Of England’s inflation calculator.

But we’re banking on £25,000 per year now. We’ve loosened our belts a notch to allow for a slightly fatter FIRE.

Playing with the numbers

We got another boost through ongoing financial education. The original plan called for a stash of £666,000 to declare FI at a 3% SWR (Sustainable Withdrawal Rate).

The standard 4% rule was and is too risky. But there are techniques to help you manage a higher SWR without inviting disaster.

It’s not a free lunch. They may mean you have to cut spending during rocky periods. You will have to run a more flexible and challenging deaccumulation strategy. I’ll go into more detail in future posts but the pioneering book Living Off Your Money shows you one way to go about it.

The knowledge upgrade means I think a 4% SWR should work for us. Especially as I previously left the State Pension out of our plan. As my free bus pass draws ever closer, it’s probably time to stop overlooking what is likely to be our most reliable source of future income.

So that explains how those milestones moved closer together. I converted them to kilometres part way through!

Our savings have mostly gone into pensions. Problematic!

Our 40s are waning and at this rate we will be theoretically FI – but marooned from our assets for a few years. Diverting new funds to go into ISAs will bridge the gap but also muller our savings rate, so we could still be half a decade from journey’s end at this point.

I’m also finding time to peel back more onion layers from my neuroticism.

What if FI isn’t for me? What if it’s a mirage? What if I find a new laundry list of things to be unhappy about? Except this time they won’t be external problems like getting up on a Monday – rather a bestiary of personal demons like loss of purpose, identity and structure.

The upside of FI is that I’m less worried about a financial deluge sweeping us away. We can’t defend against every risk but at least these days we live in a house on stilts.

The downside is that now I’ve freed up that brainspace, it’s as if I’ve nipped down to the anxiety exchange to see what other troubles are available.

I think the answer here is working on one’s self. The great thing about the FI journey is that it causes you to reexamine everything about your life.

I’ve mostly been trying to find out what really matters to me through books.

Being a better version of yourself

Man’s Search For Meaning – Viktor Frankl
An incredible book on how to live. Frankl’s insights are powered by his experience as a psychiatrist and Holocaust survivor.

The Road To Character – David Brooks
Case studies of inspiring figures who lived before the Age of Celebrity. Brooks’ thesis is that even the ‘greats’ are not the finished article out of the box. We can become better versions of ourselves as we learn to give more of ourselves.

Meditations – Marcus Aurelius
Wisdom from the most powerful man in the world – in 161AD. The Roman Emperor’s insight stands the test of time nearly 2,000 years later.

Hope for the future

Healthy At 100 – John Robbins
Why old age doesn’t have to mean decrepitude. Inspiring lessons from the Blue Zones: remote communities that seemingly enjoy better health than the West, and whose members often live vigorous, purposeful lives well into their 90s or even 100s.

The Better Angels Of Our Nature – Steven Pinker
The case against the ‘World is going to hell in a handcart’ brigade.

The Righteous Mind – Jonathan Haidt
Why does our society seem so hopelessly split? Can we heal the divisions and build greater tolerance for those who disagree with us?

The Antidote – Oliver Burkeman
Ya, boo to ‘don’t worry, be happy’ positive thinking. Embrace uncertainty and insecurity with this secular mash-up of Buddhism and Stoicism.

If this reading list is anything to go by, we’ve known the secret of flourishing for two thousand years. It’s just we’re spectacularly ill-adapted to acting on it.

I’m working on rewiring myself as best I can. I’d love to know if you are too.

Next post: Tax efficient saving for children and grandchildren with JISAs and SIPPs

Previous post: Weekend reading: Minimalism is for life, not just for Netflix