Can you invest your way onto the Rich List? 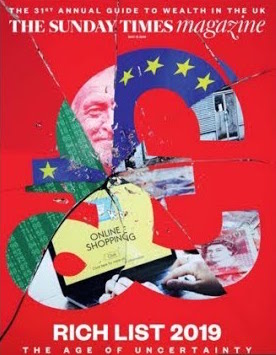 I have long had a guilty fascination with The Sunday Times’ Rich List.

I remember its launch in the 1980s. It seemed a fanciful publication. As a teenager in a comp in the provinces, I saw TV skits about yuppies in London getting rich, but I doubt my family knew a higher-rate taxpayer. The Rich List was about as real as the Lord of the Rings.

Later, as a lefty student and then a mildly hedonistic 20-something, I continued to check in with the annual tally of the UK’s top 1,000 multi-millionaires. My parents kept it for me to read on my visits, and I watched as the List was transformed from a running scorecard of post-1066 jockeying to feature more financiers, entrepreneurs, and later oligarchs and other wealthy incomers.

Then, somewhere around the LastMinute era1, digital start-ups became sexy and I became more annoyed that I hadn’t made my fortune.

True, it was hardly surprising. I was working in a low-paying media job mostly for the perks. I hadn’t started a dotcom, and indeed I hadn’t even begun investing!

But that’s what the Rich List does to you.

Just as other people are frustrated by six packs in Men’s Health or long legs in Cosmo, the future founders of financial blogs probably can’t help comparing themselves to the Monaco-going Joneses.

Friends (or acquaintances) in high places

Of course I should write a bit here about how enjoying an ice-cream on a windy British beach with your loved ones is the height of life’s riches.

Or how you can live like a billionaire on the cheap.

Certainly my co-blogger would pen a missive about the folly of chasing unicorn-founding unicorns.

Agreed, yes yes, the denizens of the Rich List have more money than most of us will ever need (some of them may be excused a requirement to fund small private armies in suspect states) and there’s much more to life than money. I learned that young, too.

Still, it would have been nice to have made the cut by now. I manifestly haven’t – I’m not sure I would even if the supplement was expanded to the thickness of a Yellow Pages. (There’s a lot of asset-rich oldies out there nowadays.)

Adding to my angst, the Rich List is no longer the outright fantasy it was back when Kentucky Fried Chicken was my birthday treat.

I’ve met hundreds of very rich people in the years since then. I’ve several wealthy friends (universally good sorts, but I pick them that way) and there are even a few people on the Rich List who’d reply to my emails. One or two I might conceivably have dinner with. And most of them got on to the list in the time I’ve known them.

So it Can Be Done. Just has not by me!

This isn’t a shocker. I tried starting a business with some friends a decade or so ago but bailed out after a couple of years. It wasn’t for me.

Investing is for me, but even here I’ve not pursued some opportunities that presented themselves. (Specifically, I’ve never tried to set up or even get a job running a fund. Maybe that wouldn’t have worked out either – I didn’t pursue the slender openings for a reason – but who knows.)

So that leaves compounding my own wealth, on a decent but pretty average by successful Londoner standard’s income.

Is it feasible? Can you invest your way onto the Rich List?

I turn reflexively to the last page of the Rich List first, to see the current cut-off. This year it’s £120 million to make the final 1,000.

Can I compound my way onto the List before I’m more likely to trouble the obituaries?

Obviously we need an expected return rate to plug into the Monevator compound interest calculator. And since my last dalliance with revealing more about my active investing stalled, I don’t propose revealing precise figures here.

Additionally, my income is still rising and I’m not even rich enough for savings not to make a big difference to the final sums.

And I’m only going to do rough-and-ready sums anyway. This is just a thought experiment, not a submission to the FCA!

In consideration of all that, let’s pick a reasonable ‘rate of wealth growth’ (ROWG) to plug into the compounding machine.

However that’s growth pretty much from the nadir of the financial crisis – a time when I was literally selling possessions to buy more shares.

Clearly that was a generational basing opportunity for anyone who wants to produce a high ten-year return figure. What about over five years?

We need to knock a bit off for inflation, so we can compare the £120m today with the same amount in 2040 or 2050. In practice the rich are getting richer ahead of the rate of inflation, but I’m going to ignore that to keep things simple. And who knows if it will last, anyway.

My investment returns would surely become constrained as my wealth grew in this (fantastic) scenario, although I’d hope to offset some of that drag with more direct investing in businesses and property, and perhaps a bit more debt-juicing. Savings will eventually be irrelevant to growing my net worth, too, whereas they have definitely been a factor in reality.

You may well feel that’s ludicrously high. Fair enough. As I say, all this is just for fun.

I will ignore the rampages of tax. I’ll assume everything is in a tax shelter and not withdrawn, or else is locked-up as capital gains.

Plug all that into the interest-upon-interest adder-upper, where does that leave me?

Well, unless I’ll be approaching my telegram from an equally geriatric King William to brighten up my mornings, I will probably not be making it onto the Rich List through my active investing prowess alone.

Stand down The Sunday Times!

What about you? Maybe you’re very rich already, much younger, or a true once-a-generation investing genius?

All of that will help. Could you become one of the UK’s 1,000 wealthiest simply by compounding savings from your 9-5?

Here are a few scenarios showing how you could hit that £120m in today’s money, and how long it would take to get there. (Position your mouse over the footnote numbers to see my assumptions.)

Note: You probably don’t want to try anything but saving-and-indexing at home. Especially the cryogenic stuff.

You can see the assumptions I’ve chosen for my table in the various footnotes. And I am sure that in the time it takes to read them, many of you will find objections.

Fair enough. This is just an arbitrary illustration of a few scenarios as a conversation starter. Feel free to plug in your own numbers. Let us know what you discover in the comments.

However I think the table does illustrate:

Who wants to be a multi-millionaire, anyway?

To conclude, I’ll stress that if I actually was loaded enough to be in the running for Rich List positioning, I’d do my damnedest to keep it a secret.

I’m a very private person. The last thing I’d want to see is a photo of myself in print standing next to my wife/dog/double oven trying to appear smugly relaxed.

When it comes to my Rich List daydreams, it’s more the thought that counts. Agreed, it’s not a good thought. It’s not a good competition. But I’m only human.

Luckily it seems the maths will save me from myself.

Anyone out there feeling punchier? (Any Monevator readers actually on the List?)

Next post: Weekend reading: Get your questions in for Lars Kroijer

Previous post: Weekend reading: We need to see a shrink