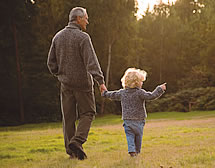 There’s no doubt the war between the generations is hotting up as cash-strapped governments decide what services to cut and who to tax.

I used to get funny looks when I blamed baby boomer landlords for the high price of starter homes. Now that opinion is mainstream.

One MP has even written a book about it. The Pinch

, by Tory minister David Willetts, is all about how the older generation have seized a disproportionate amount of wealth from their children.

And I’m inclined to agree. From job opportunities to peace to pensions to property, the post-War generation seems to have had it all.

Some argue though that the boomers didn’t get an easy ride. They tend to be boomers, funnily enough!

That said, I recently enjoyed a debate where a 30-something man took the opposite view, saying he pitied those in their 60s, and 70s. Our world was amazing, and getting more amazing by the day, he argued. Pining for the old days was pure nostalgia – the only people he felt envious of were his children.

So who is right, from a financial perspective as well as general quality of life?

I don’t have a definitive answer, but I do think there’s a couple of aspects to the debate that people are missing.

But let’s first recap the benefits enjoyed by the boomer generation, and also those of their offspring now in their 20s and 30s.

The boomers had it best…

Nobody is seriously arguing that the baby boomers born just after the war weren’t far luckier than their parents.

They didn’t suffer two World Wars. In Europe especially but also in the US, they also benefited from an expanded social safety net, more money in education, and infinitely superior and accessible health care.

But how do the boomers rank against their own offspring?

Pros of being a boomer:

We all know that young people are automatically rich. But the boomers were young once, too, so their kids aren’t any luckier in that respect.

Here are some better points of comparison:

Benefits of being 20 to 30-something today

Isn’t it all about expectations?

As my lists of benefits and downsides shows, it’s no easy thing to compare the generations. And what makes it even thornier is the issue of expectations.

If you were a clever working class boy who passed his 11+ exams and got into grammar school in the 1950s – and from there a good university – the chances are high you’d enjoy a far better standard of living than your parents could have imagined.

Whether an engineer, doctor, architect or journalist, you’d join the educational and professional elite. You could easily own a big home by the time you were 35, plus golf club membership, a pony for the kids, and a wider family grudgingly admitting for the rest of your life that you’d done well.

Compare that to a graduate today. Raised on the expectations of her parents and the 24-hour have-it-all culture, she thinks that her degree in medieval poetry should afford her the lifestyle that her father enjoyed.

But she forgets that:

To make things worse, she may also expect a career AND kids. Whatever floats your boat, but she can’t compare her life to her stay-at-home mum’s who was happy with baked beans and granny’s cast-offs through the ’60s.

It’s all down to expectations.

If you travel to rural Africa or India, you’ll find people likely happier than you living in shacks. It’s not patronizing to say it’s because they don’t expect much, so the arrival of the Internet or a new health service brings them joy.

They didn’t expect it, and it does.

What about the time value of life experience?

Expectations are about our hopes for the future. But what about the experiences we’ve banked?

The 30-something child of a boomer who says he feels better-off than his parents because life is improving every year is assuming progress is going to continue.

Remember the time value of money? This states, effectively, that a bird in the hand is worth two in the bush – that £1 today is worth much more than £1 in ten year’s time.

What is the time value of a year of our life? What if the future is much darker than the recent past?

We haven’t abolished war or disease, last time I looked. Then there’s global warming, extra competition from overseas, the end of oil, and goodness knows what else to worry about.

I’m pretty optimistic about the future, but I don’t deny those are all real threats.

In contrast, boomers have the advantage of knowing they’ve lived through most of their lives in relative peace and prosperity, and with their life expectancy increasing year-on-year.

I’m sure most boomers would swallow a pill to be 25 again and to take their chances, but that’s not an option for any of us. The comfort for a boomer is that while their children strive to be hopeful about the future, the boomers can look back fondly on a pleasant life lived.

My verdict: It depends who you are

I don’t think it’s possible to make a clear cut decision as to whether it was better to be born in the 1950s or the 1980s, even from a financial perspective.

Mix sex, drugs, and daytime TV into the equation and you’ve got a novel, not a blog article.

However I do have some hunches:

Disagree? Let us know your own verdict in the comments below.