It’s too late to get into buy-to-let 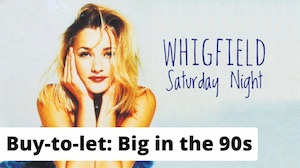 You’re too late to get into buy-to-let. It had a good run, but the party’s over.

I graduated from university in the early 1990s. I got a job in The City, moved down to London, and shared a rented house with a few friends.

After a year of renting – and spurred on by a combination of parental pressure, MIRAS1, and (ludicrously) a mortgage interest subsidy from my employer – I bought a house.

Did I have a big inheritance? No. I saved up for the deposit in my first year of work.

Okay, that’s not actually quite true. I also had some profits from punting my student loan on the stock market, the proceeds of a systematic building society carpet-bagging operation, and a well-timed cash withdrawal on my credit card.

Combined this took me over the line into buying my own house.

And yes, I do mean a house – as opposed to a flat, let alone a bedsit.

My deposit plus salary secured a three-bedroom, freehold house with a garden and garage, in Zone 1, 30 minutes walk from my job in the City.

Even I cringe a bit as I write this. Sorry, millennials.

I paid £130,000 for this house and spent the autumn weekends decorating it to the incessant radio play of Whigfield’s Saturday Night.

Then, for a while, I just couldn’t get enough of the things.

I got my first ‘proper’ bonus (two figures!) soon after I bought that first property.

While my colleagues were spending their windfalls in Clerkenwell dives doing shots from lap-dancers’ bellybuttons, I was at home eating toast, reading about newly-launched buy-to-let mortgages, and perusing the property section of the Evening Standard.

And so, barely two years after buying my first house, I bought a second.

This one was an ex-local authority three-to-four bedroom property. I picked it up for £75,000. After a lick-of-paint I let it out for £600 a month.

Soon afterwards, newly married, I left London for a pointless dormitory town in the commuter belt. I moved into a house I bought with my wife, for which I paid – cough – less than I earned that year.

And of course I kept my original home in London to let out.

Because why would I not?

In those open and liberal Blair years London was booming. As the de facto financial capital of the European Union, it sucked in talent and money from all over the world.

From American investment bankers and French derivatives traders to Polish plumbers and Italian waiters, everyone wanted to be in London.

Which meant London property prices were going through the roof:

Shortly after leaving London, I bought three more properties in a single year. My wife still reminds me of the time I went out for a newspaper one Saturday morning and came back with a two-bedroom flat.

By this time I’d worked it out. I raised equity against my steadily appreciating London properties for a deposit on the local ones. This way I put no money down.

It was like I’d discovered a perpetual money machine!

Only… the machine started to sputter a bit. The problem was that while house prices kept going up, rents did not. Starting yields were decreasing.

This was largely a story of falling interest rates. Property was like a very long duration lightly-inflation-linked bond. Prices moved accordingly.

The landlord game was also getting more competitive because more people were doing it.

Buy-to-let had become… a thing.

Too late to get into buy-to-let for big bucks

You know the old adage that an optimist is someone without much experience?

Well, that was me.

I started out on my property ‘journey’ as YouTube pundits call it by guessing that my costs would be about 10% of the rent. That wasn’t far off, to begin with.

But as rents increased more slowly than my expenses, the economics got steadily worse.

Then there’s the ‘exceptional’ costs that nobody warns you about. Or, if they do, you don’t think they’ll happen to you.

What sort of expenses? This sort of thing:

The agent for a London property reports the tenants aren’t paying the rent. Letters and threats of  legal action are (supposedly) sent to the tenants. Rent is received sporadically over the next couple of years. It turned out the tenants were paying the rent all along. The agent kept it himself. Agent declares bankruptcy, directors leave the country. Loss to me? About £18,000.

Tenant moves in, pays deposit and the first month’s rent. Never pays a penny more. Takes 14 months to get them out of my property through the courts. On taking possession I find their dog has eaten all of the internal woodwork. And when I say all, I mean all: doors, skirting, architrave, even the window sills. The back garden had been destroyed. It was like some combination of a First World War trench and 14 months worth of dog shit. I still wake up in a cold sweat, thinking about that day I spent in a HazMat suit digging out two-foot of shit to replace it with topsoil. Loss to me? About £15,000 (not including sleepless nights).

That first rental I bought in London, which I’d always let to three sharers, is suddenly designated a ‘HMO’ by the local authority. (It’s not). So obviously I have to pay them £500 and spend several hours filling in pointless forms. Oh, and I can only let it to two people now – because of some arcane bedroom size restrictions. (Ironically it was the local authority that built this property…) Perpetual rental income reduced by a third. It’s hard to quantify the loss here – what discount rate to use? It’s a lot, anyway.

My personal favorite – not because of the cost, but because of the timing. A builder is completely refurbishing a London property for me. It’s a big job, including moving walls and bathrooms and so on. Randomly I get a bill, in the post, from the police, for something like £300. They’ve attended an ‘incident’ at the property. Turns out that unbeknownst to me the builder’s laborers had been sleeping on-site. They’d got drunk one night, had a fight, and the police were called. When did this bill arrive? I think you can guess – the day after I’d paid the builder his final payment.

Once you factor this sort of thing in, along with the more regular stuff – the boilers, the double-glazing, the roof replacement, the damp that just WILL NOT go away – my 10% expense estimate was hopelessly naive.

I can now look back at more than 25 years of accounts from my modest buy-to-let empire. Starting with one property, with seven at the peak and with three remaining today.

Which means I can tell you, exactly, how much the non-interest costs were as a fraction of the rent:

Call it a third. Wow.

I do use agents to fully manage the properties, and they are expensive. But I will not be being phoned in the middle because of a blocked toilet. Not when I’m working 16 hours a day at an investment bank. (Okay, I don’t do that anymore, but I’m still not going to field those calls).

And this is why it is too late to get into buy-to-let. Along with falling rental yields, the trend in costs is only rising.

There have been lots rule changes over the years that have made things worse:

That was all off the top of my head – I didn’t even need to consult a list.

Now, don’t get me wrong. In isolation there’s nothing inherently wrong with most these rules (the exception being the last one) and the health and safety aspects are especially reasonable.

But the mood music is pretty clear. The government believes it can impose these costs on landlords because we are all loaded.

The average gross yield on my property portfolio is now – checks notes – 3.4%. Which implies that the long-run post-cost (excluding financing) yield is about 2.3%.

That is… not enough. Especially as there’s no tax shelter.

My property portfolio has been an enormous accelerator of my wealth over the years. But the easy times are over. My success came about almost completely as a result of falling interest rates.

I simply got leveraged lucky.

Some newcomers may try to make the maths work by getting into buy-to-let via a limited company or whatnot. I’d question whether it’s worth the hassle. In my view it’s too late to get into buy-to-let to make a killing. It’s not 1994 anymore.

Whigfield is more likely to have another global hit than you are to get rich investing in property at today’s starting yields. “Da ba da dan dee dee dee da nee na na na” indeed.