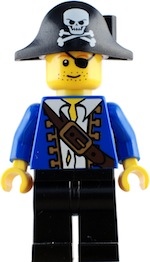 The near-zero interest rates of the past few years have thrown up plenty of frothy asset classes: emerging markets, gold, and junk bonds have all had a turn in the sun.

But few are as surprising as the craze for investing in Lego bricks.

True, almost anything can be labelled an ‘investment’ if the purchaser is sufficiently dedicated, defensive, or deluded.

I briefly dated a girl who collected ‘classic’ shoes. At least that’s how she justified the six or seven racks of rarely worn high heels in her closet.

No need for a pension for her? Not so fast. She got married last year, and a mutual friend and bridesmaid told me the collection had been “eBay-ed or Oxfam-ed.”

Back to the ISA, eh?

Nobody is immune from their passions. I hate buying stuff, but I do like my tropical fish. Every few years I wonder if I should start breeding some fantastical collection of expensive inhabitants – seahorses or soft corals or similar.

I’d have to move to the countryside to get more space, and I’d probably need to invest in creating some other product lines – special branded fish nets and food and so on – to make the numbers work…

An investment that clicks

Lego has caught many imaginations, however. US Today ran an article on David Schooley, a 49-year old who leases a climate-controlled facility to store his 3,000 boxed Lego sets.

For years the father of six has been buying Lego sets and then selling them a few years later. He claims an average return of 10-15% a year.

US Today crunched the numbers on Lego investment in 2012:

Let’s say two investors had $10,000 to invest at the end of 2011. One investor bought 174 shares of the Vanguard S&P 500 index exchange traded fund for $57.45 apiece, while the other bought 100 boxes of the Emerald Night Lego train set for $99.99 apiece. The Emerald Night is a 1,085-piece Lego set that, when built, looks like a classic steam engine with a tender and a passenger car.

Fast forward to today. The stock investors would have done pretty well, with a 15% gain, including dividends paid. But the Lego investor would be able to sell the Lego Emerald Night trains for $203 each, for a total 103% profit.

In other words, the Lego train would have outperformed the stock market by 587%.

And don’t think this is a pocket money market. As I write there is just one chance left to buy Lego box set 10179 on Amazon – a discontinued Lego replica of the Millenium Falcon from Star Wars.

The set has 5,195 pieces and of course every space ship needs a crew, so there are five figurines included, too.

With prices like that, perhaps it’s understandable that a whole investing sub-culture has developed around the kids’ building blocks.

Sites like Brick Picker and Brick Link are not catering for children who want to test their parent’s mastery of the Heimlich Manouvre, or to leave Lego bricks underfoot like little plastic landmines.

These are investor-orientated sites, catering for specialists.

According to eBay’s Lego buying guide:

It’s a good idea for a collector to pick a focus for the collection. Collectors may want to select a special interest, such as ninjas, LEGO trains, or the military, or popular collectible themes such as Pirates of the Caribbean and Toy Story. Because sets and pieces can be relatively inexpensive, eBay makes it easy to start a respectable collection immediately.

LEGO has released a number of exclusives and special edition LEGO pieces in the past. Items like the Red Baron’s Fokker triplane, the U.S.S. Constellation, and the Death Star II (over 2 feet tall) are some of the more difficult to find pieces and, therefore, are highly desirable.

Some collectors may even attempt to collect every unique LEGO brick that’s ever been made.

While this is an enormous task, some enthusiasts relish the challenge.

eBay explains that Lego bricks can even be bought by the pound from lazy slatterns who can’t be bothered to sort before shipping. Handy if you’re looking for some missing bricks to complete a collection, or if you fancy your chances of coming across the torso of the elusive Lord Lucan figurine.1

Lego investing also has its own specialist media. JANGBRiCKS is a YouTube channel that reviews Lego sets and features custom creations. It’s nicely put together, and is just one of many.

Fan favourite videos include the ‘unboxing’ of fresh deliveries from Brick Link. The avid collector unwraps and reverently fondles a new box set, or else pours his hands through hundreds of unmarked bricks like so many Arabian gold coins.

No investment is child’s play

The question with any bull market is whether you have got in at the top or the bottom. Is Lego collecting a teetering plastic tower of speculation and greed?

This post from May from the EuroBricks discussion forum has a neophyte Lego investor expressing sentiments that would be familiar to J.K. Galbraith, the author of the The Great Crash 1929. The new collector asks:

… how long did it take [you guys] until you started at least breaking even and using the funds to also pay for future sets?

Of course you need to start with a set influx.  Then you usually have to wait for your sets to retire (or snipe them just before they do).  You make sure you buy sets that will be popular (some are obvious like the Falcon, others are not).

I dunno I just want to buy sets, buy multiples (especially of Star Wars, LotR, etc) and finance my own collection.  Then start selling them but that part usually takes a few years!

What has your experience been like?  I have more than enough $$$ to start up the process but I’m not sure when it’ll start giving back, or even start funding the original buys.

Some old hands have already started exiting the scene. The author of Brick Update, a self-confessed Lego fanatic, has been letting go of his collection. He’d earlier voiced fears of a Lego bubble:

In the past few months, I have been feeling more and more as though the investment value of LEGO is peaking. It seems that the moment a new theme or set is announced, there are discussions about it’s potential aftermarket value years down the road.

I remember hearing some story about a famous banker who pulled out of the stock market before the Great Depression in the 1920s because the person who was shining his shoes tried to give him a good stock tip. The moral was: if the investment value of something is so “hot,” that everyone knows about it, then there is clearly some mania in the market.

I come from a collector and investor mindset with lots of things. I grew up in a family where we collected things and where we had some businesses based on that.

For instance, we had a baseball card business in the 1980s, and I watched that hobby grow and then crash in the 1990s. Then I saw it again and again, with things such as Beanie Babies.

So will Lego go the same way as the Cabbage Patch Kids?

As a toy it seems vanishingly unlikely. Lego is no fad. And while making plastic bricks seems indefensibly easy at the dawn of the 3D printing era, Lego has the deep pockets required to keep its products hot, even if it has failed to win legal protection for interlocking blocks.

But what about as an investing phenomenon?

I’d be bricking it

It’s easy to get apocalyptic about this sort of thing, or to read too much into a fad.

Long before a negative yield on bonds was even a twinkle in Ben Bernanke’s eye, certain toys would become crazily collectible for a time – right up until they weren’t.

Everything is so much more visible in the Internet era. I’ve enjoyed a good few hours reading up on this Lego collecting craze, whereas 20 years ago it would have been an invisible sub-culture. The various tools and sites that support the craze give it a further faddy air to an outsider.

I do wonder whether serious investors would be suggesting Lego as an alternative asset class if the interest rate on government bonds was a more normal 4-6%, and you could get 3-5% on cash.

But I also think many strange niches will emerge over the next few years – novel new ways to make money from your passions and hobbies. The world is much bigger than it was – even as it has been shrunk by travel and telecommunications – because the granularity of everything has increased so much.

And stuff in the loft is not junk anymore – it’s an eBay listing you haven’t created yet.

On the other, while I’m no Central Bank Conspiracy theorist – quite the opposite – I’m sure that at some point in the next few years it will be clear that certain asset classes were distorted due to the deliberate lowering of rates.

The price rises of some of these will prove to be a rational response to a world of increasing wealth and corresponding scarcity, as well as the ceaseless search for uncorrelated asset classes.

But other assets will see their prices deflate whenever the fears or manias that pumped them up subside.

So best not throw out that Lego you stowed in the garage. Just in case!