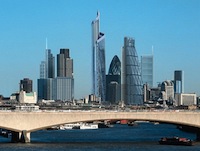 “Such an exercise in architectural uniformity, however, could never succeed. London was too large to be dominated by any one style or standard. Of all cities it became the most parodic and the most eclectic, borrowing architectural motifs from a score of civilisations in order to emphasise its own position as the grandest and most formidable of them all.”

One thing that struck me when I went to see the St Paul’s protests a few weeks ago was all the building going on nearby. Like all good Londoners, I tend to ignore the apparatus of the mammoth conglomeration around me – i.e. most of the 607 square miles of London – preferring to focus instead on my own little travails, and the local cake shop that has started selling Lamingtons. It’s how you stay sane in a city of eight million people.

Walking around the City’s streets on a Sunday, however, with time to look up without being hit by a cab or an Australian on a mountain bike, the construction work is obvious. If capitalism is in crisis, then somebody has forgotten to tell the commercial property developers. They are investing in new London office space like hippies are going out of fashion.

True, some of the sites were mothballed after the 2008 downturn. But plenty have already been dusted off and restarted. Some schemes, like Heron Tower and the upcoming Shard, were never halted.

The result is that London is going to look quite different in five years time, as the digital artist’s impression in the little picture in the top right shows.

London is getting ready for the next boom

Reinvention and thumbing its nose at history is what London does – ironically for such a great historical City. Those who’d preserve every sight line to St. Pauls are trying to turn unplanned and sprawling London into something it’s not.

This is a mercantile mega-colony, thriving on trade, competition, and opportunity. Everything else comes after.

Now, I’m not suggesting there should be no rules or planning guides governing development. Nearly all of what has survived, from the little Wren churches dotted about the Square Mile to the Huguenot terraces of rejuvenated Spitalfields are testament to the importance of that.

But cities need to keeping moving, or like sharks they die. Go to Paris if you don’t believe me.

In some strange way, these new buildings rising across London convince me even more than rational analysis that the world isn’t ending, that the West is not dead, and that I should not swap all my shares for gold. The animal is alive, even if its spirits are still breathless and it’s acting on instinct.

Next week I’ll look at some specific ways to invest in London property. Many of the listed commercial property firms look good value again, after coming down from the post-2009 surge that (happily) followed when I last bought commercial property. Indeed some of the reasons for buying then still look good today.

First though let’s set the scene with an eyewitness tour of the property development going on right now.

Think capitalism is dead? Let me take you by the hand and lead you through the streets of London…

Just a few minutes walk down Cannon Street, the new Walbrook Building (owned by Minerva) is offering nearly 400,000 square feet of space. Some say Walbrook Street was named after a stream that used to run through the City of London walls here. Like most London rivers, it was long ago buried underground.

Far more depressing than skyscrapers – or even buried rivers – is the modern ability for corporates to rewrite place names in their image. Thus Walbrook Square (just over the road from the building above) is to become Bloomberg Square, after the media giant acquired the site for its new UK head office. The developer is unlisted Stanhope PLC.

A few minutes walk further east brings us to 20 Fenchurch Street. This will eventually house the bulging 160m Walkie Talkie tower, the first of London’s big four new skyscrapers on our tour, and the one that most divides opinion, even among high-rise aficionados. Its developer, Land Securities, had planned to have the tower up by now, but the credit crunch squashed that timetable. It’s now due to be finished by 2015, though I didn’t see any evidence!

Anyone familiar with this part of London will find themselves drawn to the iconic Lloyds building on 1 Lime Street – still one of London’s most intriguing. The Leadenhall Building just across the road will at least physically put the Lloyds building in the shade, however. Better known to Londoners as The Cheese Grater, this 225m tower was designed by Richard Rogers. Work was halted by owner British Land in 2008, but it’s apparently restarted in conjunction with Oxford Properties. (Wikipedia claims 900,000 sq ft of office space, which makes me wonder if I’ve photographed the wrong corner!)

Here’s one they finished earlier. A short walk from Leadenhall Street, Heron Tower stands 230m tall if you count its mast, which makes it London’s third tallest building. To be honest, it’s not very exciting – people who complain about walkie talkies and cheese graters should come and see what sensible looks like.

Yep, it’s so far just more skips, cranes, and a snazzy font from the 1930s. But The Pinnacle looks set to be one of London’s most attractive super-buildings, with its swirling organic shape that you can see on its Wikipedia page. The building will be coated in solar panels, and like the nearby 30 St Mary Axe (aka The Gherkin) it will have a double-skinned layer to improve climate control. The unlisted developer, the Union Investment Real Estate fund, is promising nearly 1.5m sq ft.

While you’re up this end of the City you could walk a few minutes further north to check out the 164m high Broadgate Tower. This is another British Land effort, and it’s notable for a variety of reasons, not least of which is that construction was delayed for years by the discovery of archeologically significant ruins. Much of the tower is built over the incoming train tracks to Liverpool Street station, with now-defunct Railtrack having granted the company air rights.

This graffiti on a nearby building faces Broadgate Tower and the City. It’s nicely done, but in the context of all this development it sounds like a child refusing to eat his peas. But besides my ongoing sympathy with anyone frustrated at the banking blow-up and the huge rewards earned for such a monumental cock-up, they also got an extra vote because the gentrification around here is breathtaking and a little out of control. Traditionally it’s been a shabby area on the City fringes, with special areas like Folgate Street protected by anonymity. But as Spitalfields rolls into Brick Lane, it’s becoming tediously shiny.

This isn’t anywhere near the other sites, but I’ve included 30 Old Bailey as an example of one of countless smaller building sites strewn between the City and Stratford, via the Isle of Dogs. According to Land Securities, it’s another 300,000 sq ft of new space on the way. If there’s truly another headcount cull in the financial sector, London is going to be THE town for cheap offices!

Finally, at the other extreme, The Shard – or as nobody but the developer calls it, London Bridge Quarter. Differing from the others here in being (just) South of the River, The Shard will be the European Union’s largest building at 308m when it’s completed in May (although only 45th tallest in the world).

The scale when you get up close puts your heart in your mouth. I was there on a Sunday, and everybody I saw walking past looked up, like they were marveling at some super tall alien spaceship. I suppose this was what it was like in New York when they built the Empire State Building. Remarkable.

Make sure you come back next week for some practical ideas on how to invest in London property and offices via UK-listed property firms, especially if you are looking for income.

Next post: Weekend reading: How we’ll die rich and irrelevant