An investor among the anti-capitalists

A few days ago I paid a visit to see the St Paul’s campsite protestors who are demanding… well, something.

They don’t know exactly what they want and neither do I. Yet we all believe some changes are required – doubtless very different ones.

I had a pleasant enough time at St Paul’s, and thought the protestors were a genial bunch. It felt far more like the fringes of the Glastonbury Festival than Paris in 1968 – besides the tents and the harmless nutters, I was even met by a fire-tossing juggler.

Perhaps that’s the problem. The US protestors have their clever We Are The 99% slogan, which imperfectly points to financial elites as a symptom (and perhaps a cause) of today’s dysfunction.

In contrast, the St Paul’s mob seemed to be the same crew with the same varying agendas who have been cropping up at these things since I first moshed as a left-leaning student to The Levellers two decades ago.

It didn’t feel like a movement, or even a stalemate – just a bit stale.

Their flag said ‘capitalism is crisis’, and I don’t doubt their (often misguided) convictions. But the wider lack of energy, ideas, or leadership in the response to the SNAFU of the past four years suggests it’s socialism that’s in peril.

To me the camp almost felt like a dumb animal response to a hurt, some sort of festering that reveals a deeper wound, but no sign yet of a precise cause or cure.

As George Carey writes following yesterday’s resignation of Giles Fraser, the Canon Chancellor of St Paul’s and surprise ally of the protestors:

As the story developed, thermal images of empty tents seemed to illustrate the hollow nature of the protest movement. The emerging picture of spoilt middle-class children returning home at night for a shower and a warm bed begged questions about their commitment to their cause. It also seemed to suggest that the cathedral authorities in their initial welcome had been duped.

And what was the cause anyway? “This is what democracy looks like,” claimed Occupy’s opening statement. It explained that it was engaged in a process of public assemblies in a democratic process. But it is making up its demands as it goes along – truly rebels without a cause.

In some senses this is what our society now looks like. We are all protesters, even if we don’t take to the streets. We all have an inchoate sense that something is wrong and we have any number of culprits to blame – from Europe, to immigrants, to the banks, to politicians and media barons. Public distrust of the institutions of a civil society has reached an all-time high as the performance of some bankers, public servants and even recently some sections of our media has sunk to the lowest depths after waves of recent scandal.

This protest is distinctly lacking a Martin Luther King, a Bob Dylan, or even a Billy Bragg. But then so did all the uprisings of the Arab Spring. We seem to be everywhere morphing into a split society of ultra-elites and amorphous also-rans, and perhaps that’s part of the problem, too.

Anyway, here are a few photos of the St Paul’s camp for those who wouldn’t be seen dead near a hippy.

(All photos shot on my lovely new Panasonic TZ10). 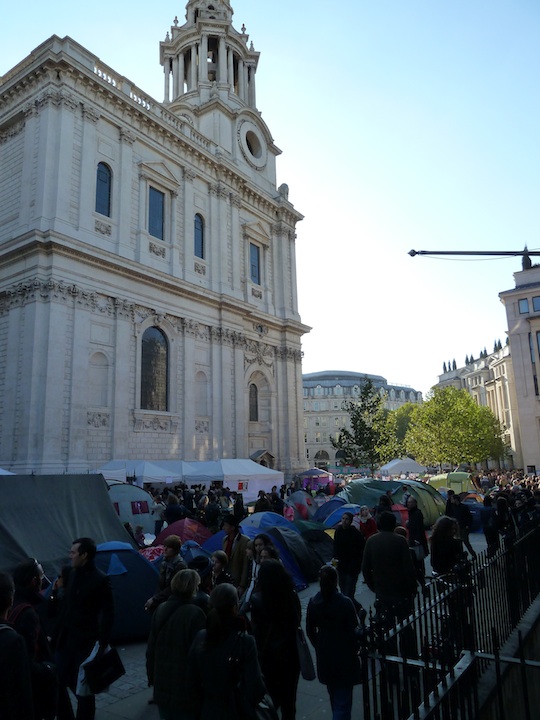 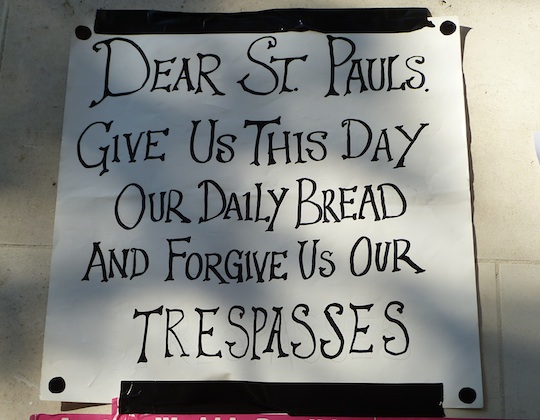 Clever. Big future in advertising for this student. 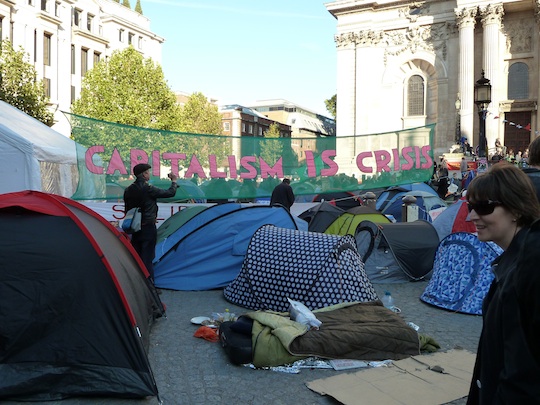 They say "is" crisis, I say "in" crisis, but let's not call the whole thing off. 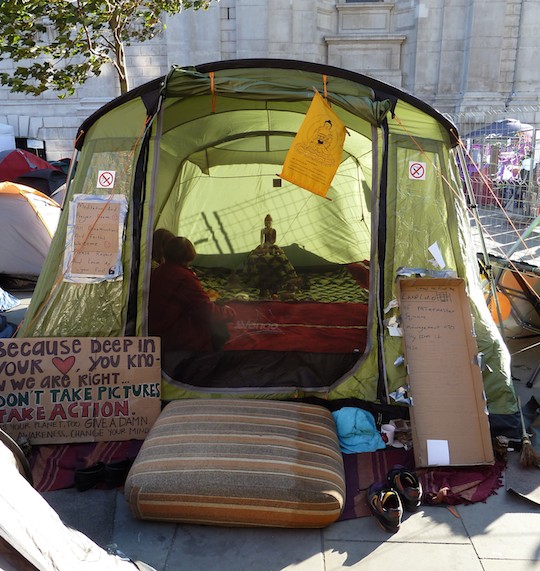 Big Buddha is watching them, too. 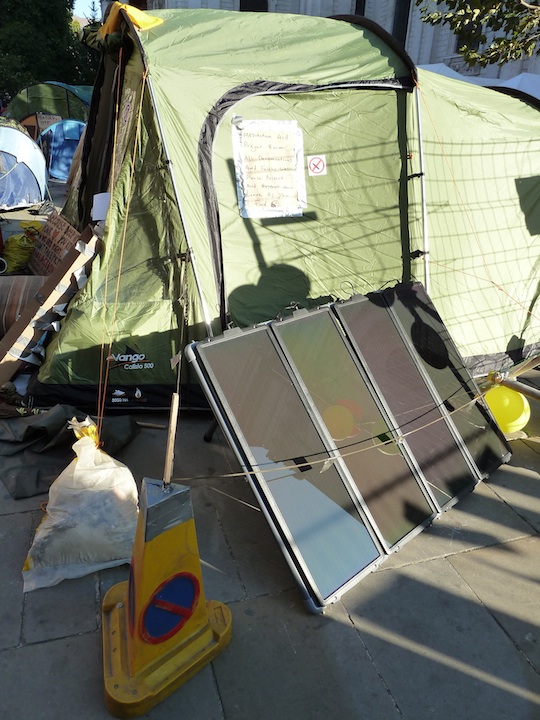 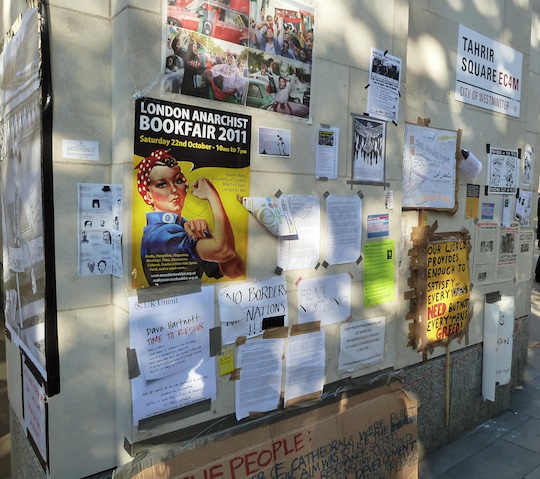 Most of the walls had messages respectfully taped (rather than graffitied!) onto them. They varied from the sublime to the sub-Socialist Worker. 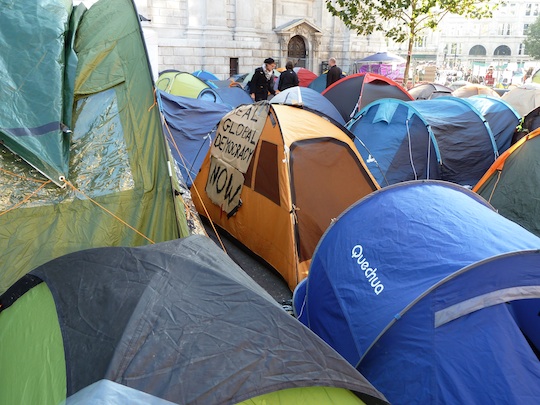 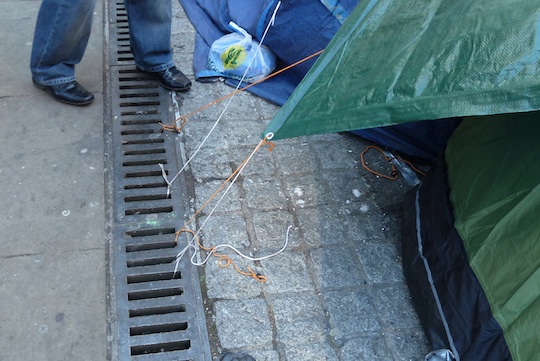 I was curious how they kept their tents rooted to the ground. 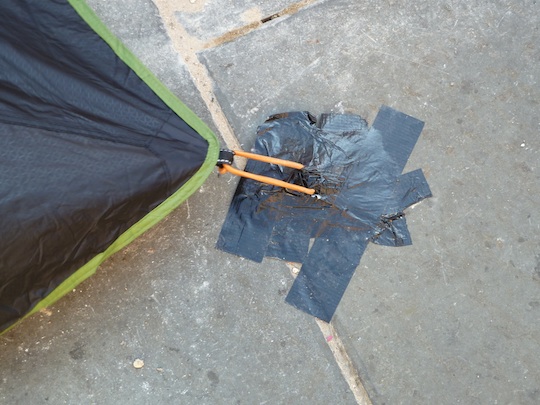 No London paving was injured in the making of this protest. 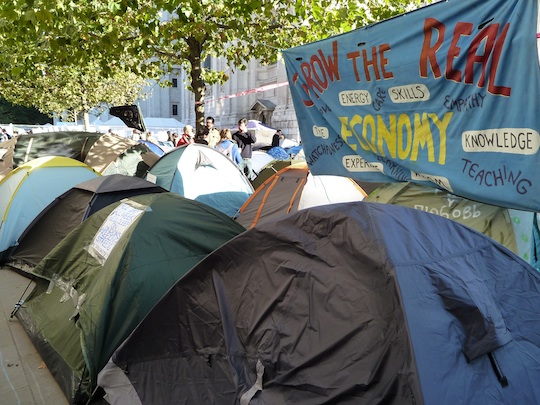 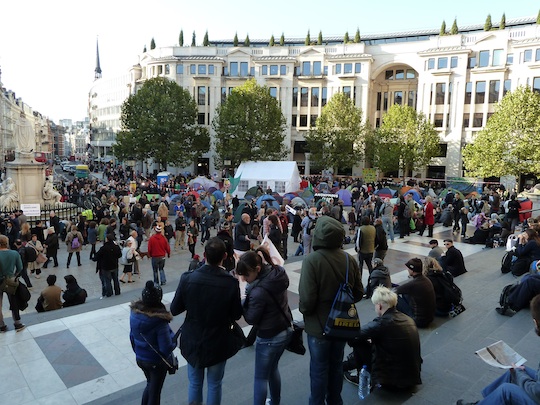 A bit like Camden market on a Saturday, without the smell of petunia oil and fried onions. 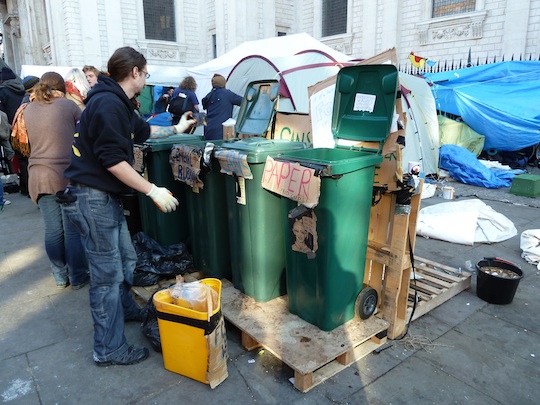 I'm not going to knock recycling bins. Shame they put so many ideas through them. 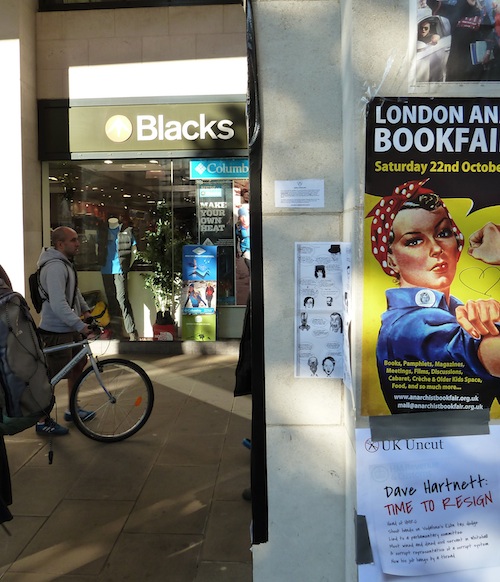 I bet this conveniently located branch of Blacks did a great trade in tents with the anti-capitalists. Presumably on the barter system. 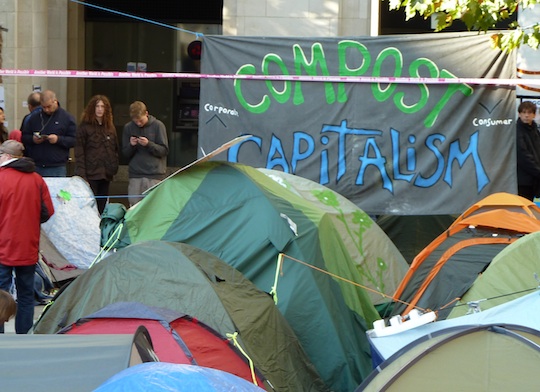 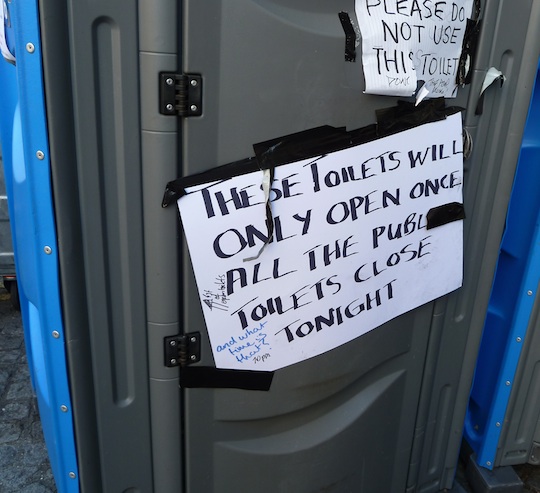 Even the toilets were revolting. (Geddit?)

Next post: Weekend reading: Fat cats of the land