Why I’m saving and investing for the disaster to come

Some people are preparing for the end of days. A fall or retreat of civilisation, linked to peak oil or the collapse of the global financial system or environmental disaster. Or whatever.

The solution is extreme diversification – up to and including living off-grid, or buying your own remote and defensible farmstead, complete with independent water supply, power generation capabilities, and the ability to feed your nearest and dearest until the smoke clears.

Anyone with an imagination is surely visited by such visions of the Apocalypse.

But the disaster scenario that preoccupies my mind is purely personal.

What are the chances that life will turn out as I dream it will – contented, productive, and blessed with good financial and physical health – without the intervention of some catastrophic event that leaves the long-term plan in ruins? 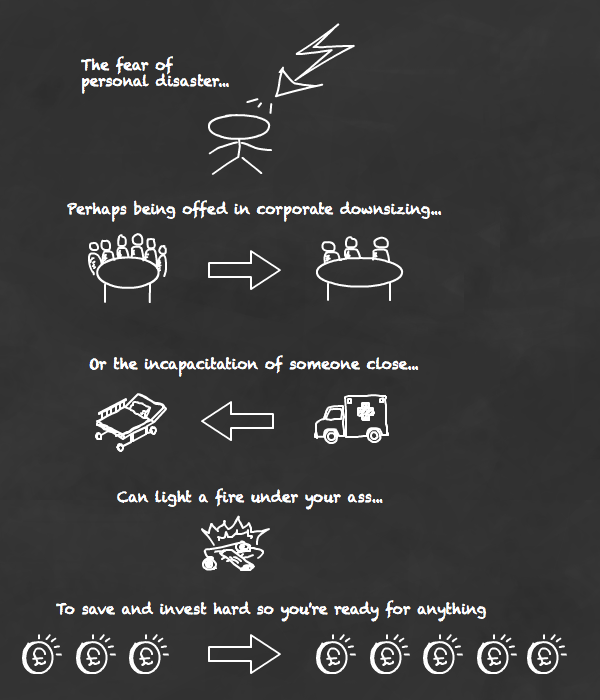 Whatever the odds, I’ve known a number of people who’ve suffered irreparable loss of income due to a bad roll of the dice:

The trajectory of many other lives has been permanently damaged by misfortune such as:

Whatever the cause, I doubt many of the affected thought it would happen to them, nor did they plan for it.

Because how can you plan for an ill wind?

I’m a relatively optimistic person – this post aside – but witnessing the casualties of life has caused me to assess my personal risk exposure to a reversal of fortune.

I don’t work in a job that exposes me to a high degree of accident or danger.

My health should be okay, too, especially given my family history, my familiarity with kettlebells, and my all-you-can-eat approach to vegetables.

But the industry I work in is being rapidly transformed by the creative destruction of the digital age. It’s an opportunity for some, but the inevitable outcome will be fewer people being employed doing what I do.

There’s every chance that I could get caught up in the fallout – my skills deemed obsolete, or at least worth a lot less in the era of globalisation.

Given the increased volatility of the global economy, I could be a casualty of a dip-of-the-curve sometime in the next five or ten years. And there’s no guarantee that I’ll be able to make good the loss.

Prepare for the worst, hope for the best

That’s a big part of the reason why I’m not relying on a 25-year plan to pay off the mortgage or an optimistic investment strategy that relies on my life going like clockwork until I can retire at 65.

I can’t plan for a quantum universe in which I’m struck by a debilitating illness1 when I’m aged 55 and 11-months.

But I can give myself plenty of room for error.

I’m saving and investing much more than I need to, by conventional lights. I want to do the hard work upfront while I still can.

The way I see it, by spending less on fancy caffeine now I either reach my goals more quickly, or I am better insulated against my personal apocalypse, if and when it happens.

Next post: Weekend reading: We need to see a shrink

Previous post: Weekend reading: What a drag* it is getting old