The clever bods at The Value Perspective have been doing a sterling job recently in tackling the weird world of the average and what it means for returns.

From writing here on Monevator, I know a lot of people get confused when it comes to how average returns work in practice – or more specifically about the different kinds of average – and what it implies for our investment decisions, whether it’s asset allocation or investing a lump sum or confronting sequence of returns risk.

And when I say “a lot of people get confused”, I’ll admit that can include me!

So most people could do with a refresher on the maths.

Start with this Value Perspective article on the law of averages, which begins:

Let’s play a game we will call ‘Russian dice’, the rules of which were invented by a physicist/economist called Ole Peters. They are pretty simple – roll a dice and, if it comes up ‘one’, I will shoot you.

Do you fancy playing? It does not sound very appealing but, if you were a nihilistic mathematician, you might be tempted because – in the very strictest terms – on average you will be absolutely fine.

However, if I asked you to roll the dice 100 times in a row, it is extremely unlikely you could do so without at some point seeing a ‘one’ come up. Bang. You do not get a chance to see the result of the 100-roll average over time.

Intuitively, we all know there is a difference between these scenarios without any complicated maths or concepts. Mathematically speaking, it is known as the difference between an ‘ensemble average’ (the average of an event happening many times concurrently) and a ‘time average’ (what happens when you do something a lot of times consecutively).

However, this concept and its implications are not well understood in investment.

After that first article provoked a fair bit of debate and confusion, their follow-up tried to explain it with a diagram:

[This time] you simply start off with a stake of, say, £100 in the pot and we toss a coin. Every time the coin comes up heads, you increase what is in the pot by 50%; every time it comes up tails, you lose 40% of whatever is in the pot.

At first sight, there appears to be no reason not to play – after all, if on each coin toss the only two possibilities are going up 50% or falling 40%, then surely, on average, it is a winning game. And indeed it is. No matter how long you play it for, on average, the expected return is positive – but, as we argued in the previous article, the word ‘average’, if not defined very precisely, can be misleading.

In this particular example, the average obscures a pattern where the majority of people who play the game actually end up losing. 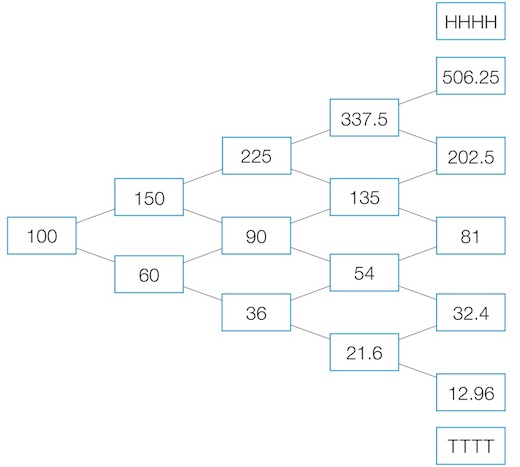 Would you play the Value Perspective’s counter-intuitive game?

In the above example, 11 of the 16 possible sequences of coin tosses are losing permutations and, the longer the game goes on, the more money is lost.

In a game where the only possible outcome each time is a 50% upside or a 40% downside, that would appear counter-intuitive so what is complicating matters?

It is that difference between time and ensemble averages.

Read the whole article for a deeper explanation.

Go on – you’ve got Sunday to recover from the headache!

p.s. I was struck by the latest article by Carl Richards for the New York Times on the difficulties of investing in real estate. It’s aimed at US readers, and argues that most property investors will make a low return unless they have special skills and insights. How different from the UK, where almost anyone who bought a buy-to-let 5-10 years ago is an investing genius! Now it’s true that the US is a very different market when it comes to property. Still, I think the big divergence isn’t so much to do with the asset class as because their bubble burst and ours hasn’t. Would Richards have published this piece in the still-roaring US property market of 2006? I doubt it. (I wonder if he will be able to re-purpose his piece for a UK publication come 2016?)

Product of the week: Investing in alternative energy has an obvious appeal if you believe we’re not moving fast enough on climate change. So I’d expect the latest share offer from long-established Tridos Renewables to do well, especially since you can now put in as little as £50. With my hard-headed capitalist hat on though, I’d question whether the 5.8% return that The Guardian estimates an investor who is cashing out would have achieved over the past nine years is enough for the risk. The 9-10% touted by the company is more like it, but is it realistic? I suppose there’s also a good vibes dividend to take into account.

Book of the week: The Education of a Value Investor

by hedge fund manager Guy Spiers is my new favourite book on active investing. It’s all about mindset rather than metrics and every active investor should read it. Prepare for regular plugs here.