The momentum factor is one of the most frustrating forces at work on our portfolios. Frustrating because it can be a potent return enhancer – yet it has historically been difficult for an ordinary investor to actually exploit.

Momentum is one of the mighty return premiums that sit like gods in the pantheon of portfolio power-ups.

By tilting towards equities that are especially risky, or mispriced (because humans are serial dunces) these premiums have historically unlocked the door to market-beating returns.

What’s more, it’s been shown to exist in the UK since the Victorian era, and just about everywhere else bar Japan. 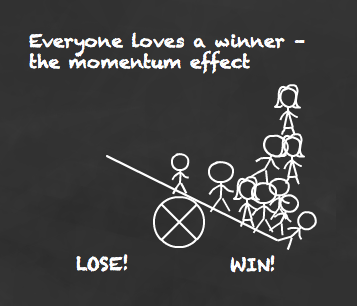 So what is momentum?

Momentum is the financial equivalent of a pitch invasion, where everybody crowds around the victors, hoists them shoulder high, invites them home to meet their mam, starts to dress like them, buys their fragrances, asks their opinion on the West Lothian question, and so on.

Success leads to greater success. Meanwhile the losers are shunned, despised, spat at, set upon by dogs…

Put more plainly, momentum is the tendency for winners to keep rising and losers to keep falling over periods of 12-months or less.

A momentum strategy buys the winners while selling or shorting the losers.

Why does the momentum premium exist?

Unlike with the value premium or the small cap premium, few researchers think that the momentum premium is a reward for taking greater risks.

Instead, momentum is about exploiting human weakness – specifically our inability to respond to news quickly and an inclination to under react or overreact to new information.

The idea is that lackadaisical investors digest news over the space of months, rather than incorporating it into the share price in nano-seconds, efficient market-style.

Regardless of the explanation, the momentum premium has not been arbitraged away in the 20 years since its discovery – although it has weakened to a 6.3% annual return in the US since 1991.

What makes momentum even more valuable is its low or negative correlation with other premiums.

Finding negative correlations is the Holy Grail of asset allocation. Holdings that act as counterweights can reduce your portfolio’s volatility when markets are turbulent.

Momentum is particularly interesting to value investors as the two factors have historically been negatively correlated (-0.27% in the US from 1927-2013).

Of course, like all the return premiums, momentum can fail to deliver.

It dished up an unsavoury annualised return of -1.3% a year from 2004-2013, which is a timely reminder that trying to capture return premiums is not a game for the fainthearted.

The momentum everyone’s been waiting for

The biggest problem with momentum is that it’s like a rare herb, with fabled medicinal qualities, buried deep in the Amazon jungle. It’s well known but very difficult to get hold of.

Currently there are only two momentum index trackers available in the UK, and they’re mere hatchlings with no track record to speak of.

Both are available in ETF form:

Both ETFs cover the developed world including the UK and apply a formula to identify the highest momentum equities in the MSCI World index over the last 12 months. The equities that are judged to be on fire go into the ETF.

I’ll compare the chops of these two ETFs at a later date, but it’s important to understand that you shouldn’t just plump for the cheapest product and be done with it when it comes to risk premiums.

FTSE All-Share trackers tend to be much alike, whereas there are many different ways to slice a risk factor. Some products may be better than others at creaming off the extra return.

Make sure you understand:

If the product provider isn’t transparent about how its flashy smart beta tracker works then forget about it. Also, don’t rush into new products. They often need several months to bed in, so hold your fire until those bid-offer spreads settle down.

Given the proliferation of risk factors and firms racing to provide smart beta ETFs to track ’em, most of us will probably find it a lot easier to invest in a multi-factor ETF that combines value, momentum and other factors in one handy package.

If so, then the Amundi ETF Global Equity Multi Smart Allocation Scientific Beta UCITS ETF not only has a name longer than the average Welsh town but also attempts to capture momentum in its dragnet.

Dimensional Fund Advisor fans have no need to fret though as DFA funds already include a momentum screen as part of the service.

You can capture some of the momentum premium by making sure you don’t rebalance too frequently.

Keep your moves to once a year, or even stretch it to every two years if you can. Or, if you use threshold rebalancing then keep your trigger points relatively slack (for example rebalance when an asset class moves 20-25% from target).

Next post: What if you want to invest in active funds?